The street of perpetual rain in the middle of the desert, the latest invention of Dubai

A street where the umbrellas never close, where - apart from the desert climate and the sand storms that surround it - a blanket of rain threatens to steadily soak those who 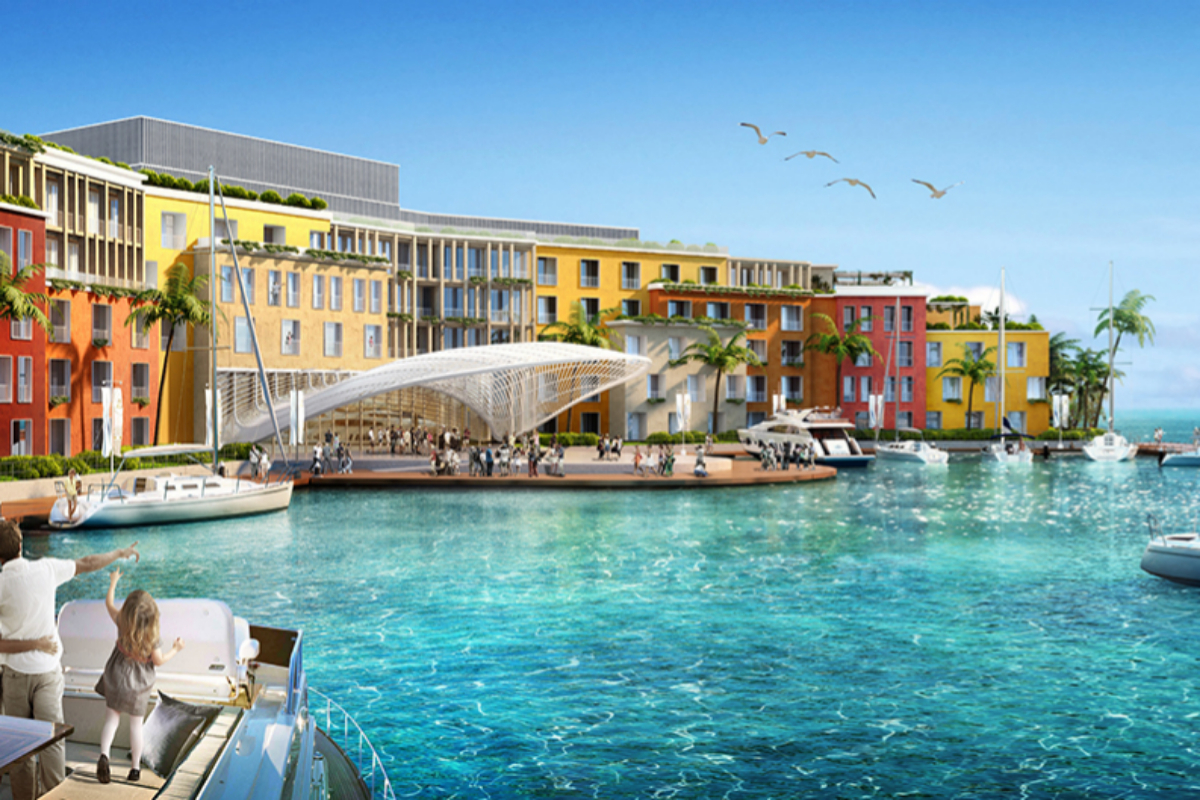 A street where umbrellas never close, where - apart from the desert climate and the sand storms that surround it - a blanket of rain threatens to soak incessantly those who pass by. It is the latest and most expensive invention to be built in Dubai , the arid skyline of luxury and skyscrapers in the United Arab Emirates .

The kilometer-long artery is one of the main claims of the The Heart of Europe project , a $ 5 billion macro tourism project that stands on the coast of Dubai and which - made up of seven small islands - promises to its future tenants and guests a piece of the old continent in the middle of the Persian Gulf .

"After years of research and experimentation, we are building Calle de la Lluin that we hope to deliver in phase one of project development, later this year," says Kleindienst Group , the largest European construction company on Emirati land. , indifferent to the economic storm that the ravages of Covid-19 and the fall in the price of oil project on the Arabian peninsula.

The road, unique in the world and dedicated to restoration and shopping, is based on the concept developed by the Austrian architect Camillo Sitte , who died in 1903, who traveled throughout Europe capturing ideas for a more welcoming urban planning. "We follow his concept of cities built with streets and boulevards within walking distance. But to be able to walk from one place or another, you have to have the right climate, something only possible here with technology," they explain from the firm.

According to the street planners, "as soon as the temperature on the island exceeds 27 degrees, cold rainwater will fall from the roofs of buildings through hidden pipes." In Dubai - where rainfall is a rare sight, characterized by brief downpours and occasional storms - winters are hot and summers extremely hot and humid, with thermometers often reaching 45 degrees. The rain makes an appearance about 25 days a year.

Statistics that the new urbanization -with 15 hotels and more than 4,000 exclusive homes, some with rooms with underwater views- wants to change its purpose to seek the European touch. The rainy street - managed, according to its creators, with solar energy and zero carbon emissions - is located on the main island of the complex, in an area of ​​hotel establishments that bear the names of Marbella , Portofino - a fishing village in the Italian Riviera- and Côte d'Azur -the French Cote d'Azur- .

"The complete experience of the Costa del Sol"

The Heart of Europe complex, where the street of perpetual rain will be located.KLEINDIENST GROUP

In the case of the hotel with a Spanish name, the promoters of the project promise those who stay in its 196 rooms "to live the complete experience of the Costa del Sol ". The main island will also house the hotels Ibiza , London , Munich , Nice , Saint-Tropez , Amsterdam and Icaria .

Despite its location between the frescoes that decorate the reception of the Italian hotel and the establishment inspired by Malaga, the concept of perennial rain drinks from the north of the continent, also present in an ice square. Those who enter the boulevard will have to provide themselves with an umbrella. The pluvial precipitation will vary according to the time of the year.

"It will be a downpour, delicate breeze or moderate rain depending on the weather"; need from Kleindienst. In the summer, when many flee the emirate city of 3 million souls, the idea is that the street weather - with an always constant temperature of 27 degrees - bless passers-by with heavy downpours. "The engineers asked us if we wanted to reduce the temperature as in other places, through the use of cold air. We opted for the rain. We knew that people like it, especially in summer," they say from the company.

"With temperatures ranging from 40 to 50 degrees in summer, people cannot go outside for a walk. Hence, we need a technology capable of creating a climate controlled outdoor area," argues Josef Kleindienst, president of the construction company that has embarked on an urban development that has suffered years of delays. "To do this, we contacted engineers and advisers from the European institute that visited Dubai in 2008 to conduct research and better understand the climate."

When the drops begin to fall on this type of European theme park, Dubai will add another artificial "gem" to the street that was born from the mana of petrodollars, where before there was only desert and nomadic population. The city, the nightlife capital of the Emirates, already has Borg Jalifa , a work of architecture and engineering that, at 828 meters high, presumes to be the roof of the world; one of the largest shopping centers on the planet; the world's largest system of dancing fountains and an archipelago of artificial islands.

President of the Tourism Committee of the EurocamaraKarima Delli: "A map will be approved with the safe areas to travel to"

CultureDying to Success: Venice Death Story, From Napoleon to Carnival

Summer From a cabin in Asturias to a rooftop in Seville, these are the most desired 'Airbnb' in Spain