Real Sociedad de Atocha and the 80s reinvent themselves in a big way: "That Madrid and Barça don't neglect each other"

Górriz, Satrústegui, Zamora and López Ufarte, or what is the same, Real Sociedad, which won two consecutive leagues and a Copa del Rey in the early eighties, enters the age of... 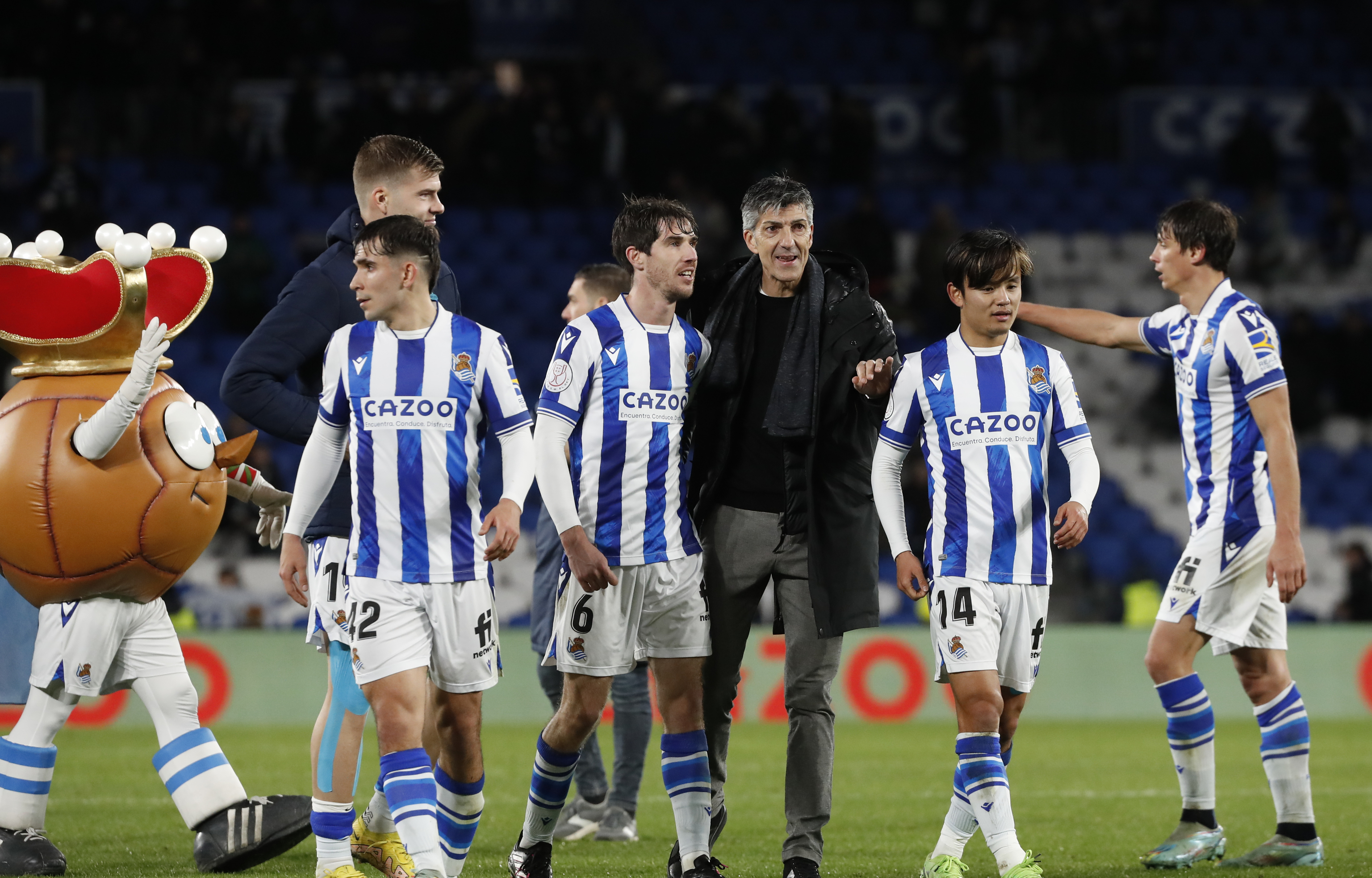 , or what is the same, Real Sociedad, which won two consecutive leagues and a Copa del Rey in the early eighties, enters retirement age without having been able to repeat the unrepeatable.

However, historical figures from then have begun to jump through the air and the Reale Arena, which seemed big, now seems small.

"He is giving us reasons to be excited, and you know that we Gipuzkoans are quite prudent, but why not dream, dreaming is free" says Bixio Gorriz, from his unbeaten pedestal of

499 games with the Real shirt.

have won seven straight victories in which they have conceded a single goal, and start their big week by visiting the

today for the Copa del Rey quarterfinals, and on Sunday the

for the League, just the distance away from fight Real Madrid for second place.

Zamora, the former Rentería midfielder, responds from the living room surrounded by grandchildren, who from time to time are heard passing near the phone and then disappear, as if clearing their heads: "Then we were very physically strong, there were some technically very good, and

we were very tall for the time,

Satrústegui, the top scorer in the club's history with 162 goals, is the one who has forced the two rockets that were used to warn the fishermen that the Real was scoring the most times.

Only one if the rival scored, in what was the first recreation of the VAR wait.

On the road and hands-free, he underlines "the technique of Zamora and

Although the latter clarifies, after initially hanging us for making the unforgivable mistake of interrupting a man from San Sebastian at lunchtime: "Well, well, he says that because he is the top scorer in history and I am the second, and that many of the goals, and it's true,

they were thanks to me

"To match that, almost impossible"

Zamora explains the differences using his resume and settling outstanding accounts with arbitration: "We got two leagues and we didn't get the previous one because of the arbitrations, if we hadn't had three. Then we had a Cup, another final, several second places, we almost reached the Champions League final, if not for refereeing, to an almost UEFA semi-final, is that we have done very important things, and then many of us were in the Spanish team, we were the base... to match that seems almost impossible to me.

How do we compare something that is about to be done with another that has already been done?

We were all from home, and practically the same all our lives. Now half the squad or more are from abroad. That will never be able to be compared".

Although if they all agree on something, it is the similarity between their coach at the time,

"He contributes things that are reminiscent of our time," says Satrústegui.

"He made his debut with me at Real, I had him as a teammate and he is a professional like the cup of a pine tree, also it is coming out almost for free, because imagine what you would pay for a coach who gets you into Europe three years in a row and takes kids like he does", explains Górriz.

La Real invests more than four million euros a year in clubs in the province, and Imanol is the quarry taken to the extreme:

a coach trained by them to train the first team.

"He loves the kids, and I think his mentality was to be at Sanse (Real's subsidiary), but he had to join the team in a moment of trouble, and he has more than demonstrated that he has the capacity," says Górriz.

Sheriff congratulates his players after the victory against Mallorca in the Copa del Rey.EFE

After his victory last week in the Copa del Rey against Mallorca, Imanol has become the fastest Real coach to reach one hundred victories.

, less than what it cost Ormaetxea, whom he also just surpassed in winning percentage:

"Both Ormaetxea and Imanol are very short on words. Well, Imanol was, because he has already loosened up a bit... Ormaetxea spoke just enough and necessary to demand, motivate, and little else," says López Ufarte.

"No, no, Ormaetxea spoke much less".

"He barely spoke but he knew what he wanted," recalls Zamora, "is that now for a pre-game or a post-game they give you every talk that seems like philosophers."

"In the 80s it was also very difficult"

Was it easier before to get your hands on Madrid or Barça?

trapped by the storm on the island of Formentera

, where he had gone to visit his son, in the squad of the island's club, in the Second Federation, which shows that putting together a new unrepeatable team seems easier than putting together to the old man: "The League is a very complicated competition for a team other than Barça or Madrid to win, and getting a hold of the greats is much more difficult than in our time, there is a lot of difference in budget, squad, but hey. ..".

López Ufarte does not agree: "In the 80s it was also very difficult."

And even less Zamora: "The differences in budgets were also important; and also they had foreigners, or from other Communities and we were all from home."

Satrústegui goes further: "That Madrid and Barça don't neglect each other.

To achieve great victories you have to have experience, and now it is a very consolidated team

, and mistakes made in the past are being solved."

And what has been the key to success?

"He comes from behind, the team has been performing at a very high level for a few years, getting into Europe, winning the Cup, and it began, and it is curious,

by going down to the Second Division

"It must also be said that the World Cup break has been very good for him," adds López Ufarte, "last year there was none and the team fell apart little by little, he accused that fatigue. This year for the moment he is managing to move forward and

with a game that I fall in love with"

Arconada and López Ufarte celebrating the first League title in 1981 at El Molinón.

Bixio is delighted with

: "He is one of these figures that you have to take advantage of not only on the field but also in the dressing room, because he transmits values ​​to the kids and makes them grow. I know he had other options, I'm sure he would economically better."

He is also delighted with Zubimendi, "who has been maturing, Mikel Merino who has come to Real like a glove, and who has also rejected Emery's offers from Aston Villa to stay...

That is a risk that you are going to have always, that the girlfriends approach you

, now the Real has it and it is a very nice problem".

For López Ufarte, the team now "is recognizable, it doesn't vary much from one game to the next.

There is no midfield that is the same or better:

Zubimendi, Merino and Brais Méndez, who landed on their feet, and for me they should have gone to the World Cup, and especially Silva, they form a midfield that is a pleasure to see, with a position game that no other team has (...) And imagine now with Oyarzabal".

And who would you dispute the position with today?

Zamora responds: "It is that now soccer is very tactical, they are more versatile, they are not like before when they were more positioned. There are other genetics, other training materials, other fields, other balls...".

-Come on, if they give Imanol to Górriz, Ufarte, Satrústegui and Zamora in full it will not put you.

I think it does turn us on

[laughs] I would do some retouching but it turns us on, sure it does.