France star Kylian Mbappe repeated his visit to his colleague in Paris Saint-Germain, Ashraf Hakimi, before Morocco’s confrontation with Portugal in the quarter-finals of the 2022 World Cup. 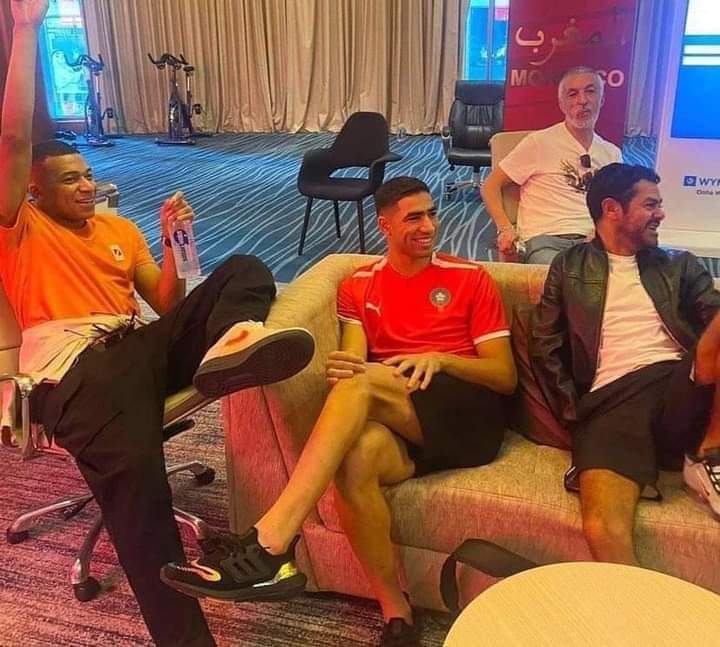 Social media accounts shared pictures of Mbappe going to the Moroccan national team camp, indicating that the World Cup top scorer met again with Ashraf Hakimi's girlfriend and they had lunch together.

Mbappe had visited Hakimi before the historic match that brought Morocco together against Spain in the round of 16, which ended with the victory of the “Atlas Lions” on penalties, before the French star announced his happiness with Morocco’s victory, and Hakimi shone in the meeting by scoring the decisive penalty kick that granted Morocco the ticket to qualify for the round of the eight.

On Saturday, Morocco will meet Portugal, while defending champion France will play England on the same day, and the two winning teams will meet in the semi-finals.

Twitter users shared a picture of the Paris Saint-Germain quartet while celebrating a goal with the French team, and indicated their wish that the semi-finals would witness the presence of Lionel Messi, Kylian Mbappe, Ashraf Hakimi and Neymar Jr.