Morocco disturbed the peace of the major teams when it crammed itself into the quarter-finals of the World Cup Qatar 2022 in football, achieving a big surprise by overcoming mighty Spain, becoming the first Arab country to reach the quarter-finals. 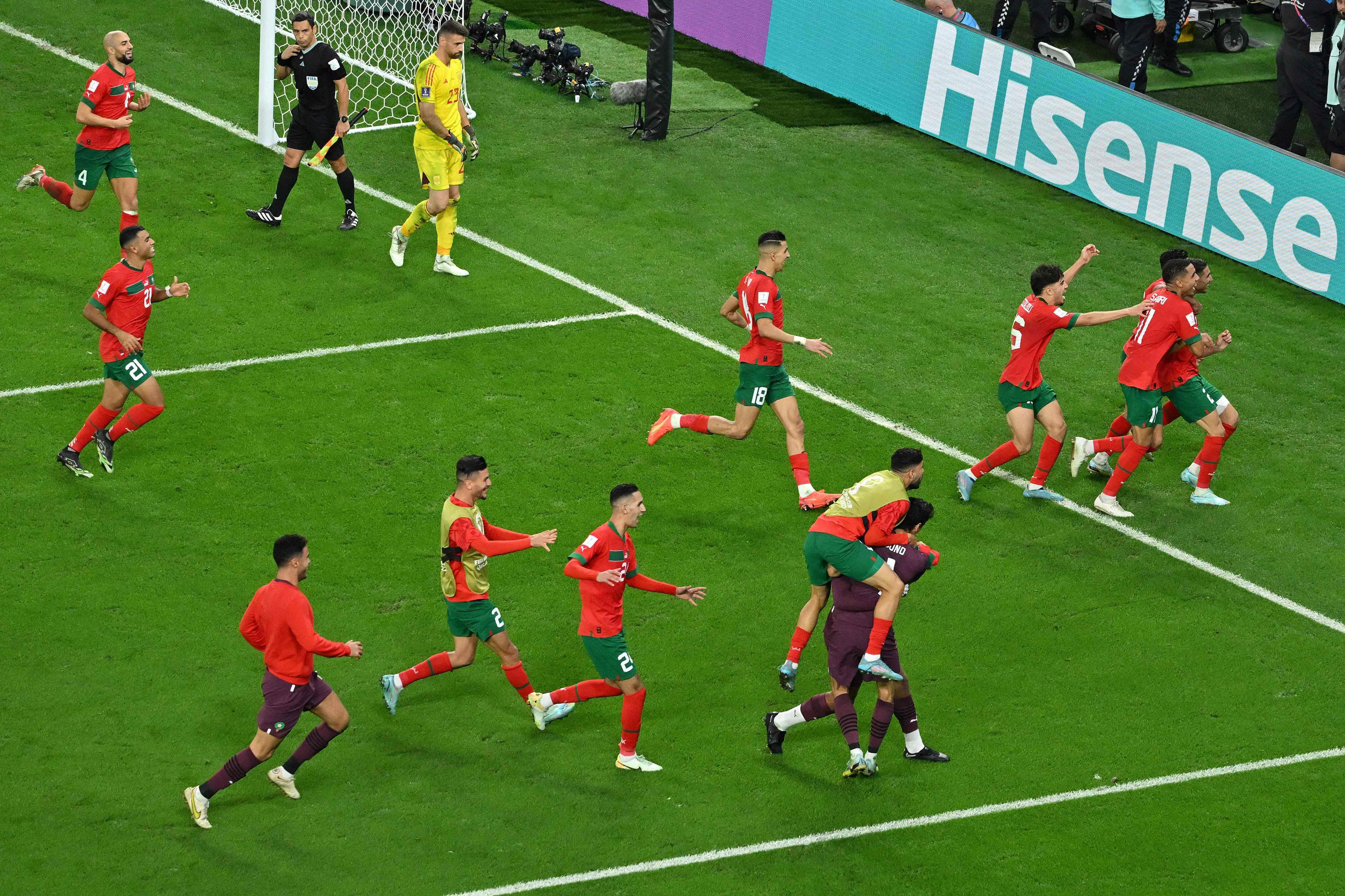 Morocco disturbed the peace of the major teams when it crammed itself into the quarter-finals of the World Cup Qatar 2022 in football, achieving a big surprise by overcoming mighty Spain, becoming the first Arab country to reach the quarter-finals.

And while the major teams were “liquidating” those with lesser status in football, Morocco had a different word, when it shocked Spain, the 2010 and European champions 2008 and 2012, with a penalty shootout on Tuesday, and returned it early to Madrid.

The liquidation of the representatives of the "submerged" continents began in the final price, with the elimination of the three-time runner-up Netherlands, the United States (3-1) and Argentina, Australia (2-1) without much resistance.

And while France, the 1998 and 2018 champions, manipulated a team from the old continent when it played a picnic against Poland (3-1), the English champions of 1966 enjoyed a hat-trick against African champions Senegal 3-0.

Japan was the only one who resisted from the Asian continent, but the penalty shootout did not help it against Croatia, the runner-up in 2018, especially its goalkeeper Dominik Levakovic, who saved three balls.

Brazil, the defending champion five times, most recently in 2002, defeated South Korea 4-1, and Portugal crushed Switzerland 6-1 in a European match.

But the only breach in the quarter-finals by an African, Asian or North American representative came from Morocco, a few kilometers away from Spain, which he dragged into a penalty shootout, whose champion was goalkeeper Yassin Bounou (3-0).

Regarding this sudden breach, Morocco coach Walid Regragui was frank after eliminating Spain with a penalty shootout that followed the goalless draw at the Education City Stadium.

- In response to a question about his attempt to prevent the ball from reaching defensive midfielder Sergio Busquets, the young coach said, "Exactly. We have accepted the lack of possession. We have the humility to say that we are not France, Germany or England to compete in terms of possession."

"However, these countries failed to take the ball from them (for Spain). No one succeeded. I am not a magician," continued the former Wydad Casablanca coach, who replaced the Bosnian Wahid Halilodjic two months before the tournament, due to the latter's disagreements with some players, most notably the star Hakim Ziyech.

After a super first round in which he topped a fiery group, with a goalless draw with Croatia, a 2-0 victory over mighty Belgium, then Canada 2-1, this is how the “Atlas Lions” got rid of the “La Roja” stars: “We worked four days on this game plan. We were We know that Busquets, Gavi and Pedri are the key. Our attackers and midfielders close all the passing angles. We had to know how long we could last. The game plan was respected and then came the penalty shootout, the lottery".

With the exclusion of the representatives of Asia, North America and Africa, Morocco remained the sole representative of the continents that have always played secondary roles in the World Cup.

Out of the 21 editions of the World Cup, Europe won 12 times and South America 9 times.

On representing Africa in the quarter-finals, for the fourth time in the history of the competition, after Cameroon (1990), Senegal (2002) and Ghana (2010), Regragui said, "We seek to be a locomotive in Africa. The continent is progressing, and Morocco has made great efforts. I arrived in 2013, Since then, the stadiums have developed, the federation has made great efforts and His Majesty provided a lot of capabilities. Today we have high-level stadiums, we have received training for cadres, and we have three or four players who graduated from the Mohammed VI Academy.

"I'm a good example of that: I'm a local product. I got my diploma in France, but my country of origin gave me the opportunity. I have to repay them."

The quarter-finals kick off on Friday, with five European teams qualifying, 2 from South America and Morocco.

But with the great thirst for Argentina's Lionel Messi or Brazil Neymar, or even the current outcast Portugal Cristiano Ronaldo, the equation seems more difficult this time, and why not surprise the size of the mountains and the power of the "lions" whose champion is Morocco to give the brown continent the first title in its history