Another thrill of the World Cup is that players from the same team risk their country's honor and face each other as opponents, giving a heart-warming impression. Teammates Heung-Min Son of Korea and Richarlison of Brazil showed their strong friendship by hugging each other right after the fierce match. 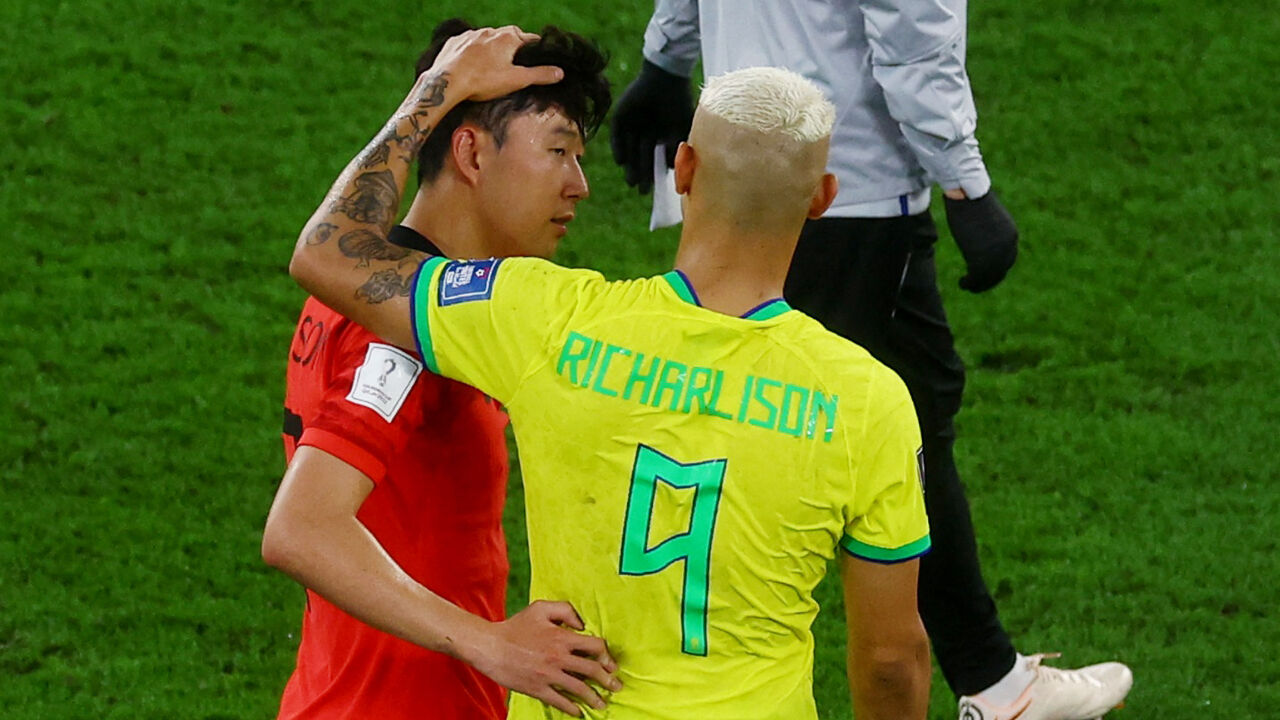 Another thrill of the World Cup is that players from the same team risk their country's honor and face each other as opponents, giving a heart-warming impression.

With this, Korea's Qatar World Cup journey ended in the round of 16.

On this day, Brazil overpowered Bentuho with strong forward pressure and quick transfer of air and defense, and Bentuho conceded 4 goals in 36 minutes in the first half.

He was awarded a penalty by Jung Woo-Young in the 10th minute before Neymar scored to give Brazil a 2-0 lead.

Then, in the 29th minute of the first half, Thiago Silva's pass shook Bentoho's net with a calm left-footed shot.

Apart from the results of the match on this day, what attracted attention was the confrontation between Heung-Min Son and Richarlison, the 'Tottenham Duo', who faced each other on the World Cup stage.

Their team, Tottenham, also posted photos of the two players through their official SNS, revealing their anticipation.

The two players, who met from teammates to enemies, played head-to-head, and as soon as the final whistle was blown, he came to his colleague Heung-Min Son and gave him a warm hug.

Looking at Son Heung-min's swollen face due to an orbital fracture injury, he made a worried expression.

It was a scene where you could feel the strong and warm camaraderie between the two players.

British football London said, "After the game, Son Heung-min and Richarlison had several conversations and then hugged each other."

According to The Athletic, an American sports media outlet, Richarlison said, "Soccer is like that. Someone wins, but someone else loses." Because it is necessary," he said.

Not stopping here, Richarlison left a special message for Son Heung-min through personal SNS after the game, saying, "I know how hard you have fought so far. That's why you are a hero to your people."

His team, Tottenham Hotspur, also left messages of comfort and congratulations to the two players immediately after the game.

Son Heung-min congratulated Son Heung-min with the words "Sonny" and a heart emoticon, and Richarlison with a clapping emoticon saying "Brazil, Richarlison and Brazil advance to the quarterfinals."

Richarlison will also face Croatia in the quarter-finals, where Ivan Perisic from Tottenham will play.

Croatia beat Japan in a penalty shoot-out in the previous round of 16, and Perisic scored an equalizer in the second half to set the stage for his team's victory.