"This is why we love football." Watch - moments of crying and scenes of anticipation and joy between the fans of South Korea and Uruguay

South Korea striker Hwang Hee-chan unleashed the emotions of the Korean fans after he scored the winning goal to qualify for his country in the fatal time of their match against Portugal, while the Uruguay fans mourned. 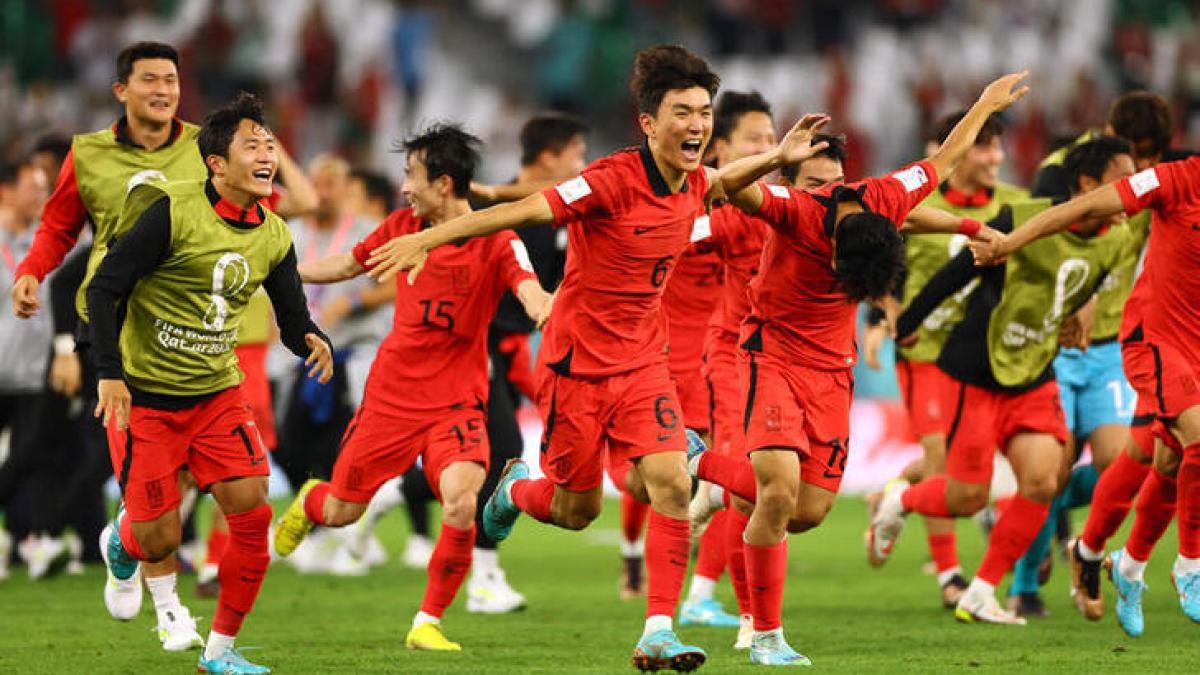 On Friday, the cameras of photographers in the Education City stadium documented the exciting moments experienced by the players and fans of the Korean national team after the end of its match against Portugal while they were awaiting the end of the second match in the same group, which brought together Ghana and Uruguay, in order to get to know the team that will accompany Portugal to the final price of the World Cup Qatar. 2022.

Video clips circulated on social media showed scenes of the sad moments experienced by the Uruguayan national team players and fans, after failing to qualify for the final price of the Qatar 2022 World Cup, despite the victory it achieved over Ghana (2-0), but it was not enough to revive his hopes to continue his career. in the World Cup race.

And the "Albiceleste" team achieved a deserved victory over the Ghanaian national team at the end of the first round matches of Group H with two goals without a response, to equal 4 points with South Korea, but the latter was the one who snatched its qualification by calculating the advantage of the attack (4 against 2).

Until the first minute of stoppage time for the Portugal-South Korea match, the Uruguay national team was ahead of Ghana with a double in the second match of the same group, the owner of the qualification card for the second round, but the joy shifted from Uruguay to South Korea after Huang Hee-shan scored the winning goal for his country. In the fatal time of its match against Portugal.

The two teams were equal at that moment in goal difference, which makes any goal by the Uruguay national team advance directly to the second round.

After the end of the South Korea match, the players gathered around one of the phones in the middle of the field to follow the other meeting, in a scene of anxiety and tension, which was evident to many players.

The cameras also documented the moment when this anticipation turned into overwhelming joy, as soon as the referee for the Uruguay and Ghana match blew the final whistle, announcing the rise of Korea, accompanied by Portugal, to the World Cup final price thanks to its victory and calculating its primacy in the number of goals scored.

Those clips won the admiration of the pioneers of the platforms, and they considered it the fun for which everyone follows football, as everyone awaits the result until the last minute, and the Korean national team was widely praised on the platforms after its heroic match against Portugal.

When joy and sadness meet in the stands... it's football # Qatar 2022 # World_Cup # Al-Kass channels pic.twitter.com/27GZX8aUj9

Uruguay’s victory and its arrival in second place with 4 points was not enough for Luis Suarez’s teammates to pass the final price, as they were equal in the number of points (4 each) and in the difference in goals accepted and scored (zero for each team), but the calculations for deciphering the state of equality were decided by the number of goals scored ( Attack precedence), as the South Korean national team scored 4 goals and accepted the same, and the Uruguay national team achieved two goals and accepted the same, while the direct confrontation between them ended, as is known, in a negative draw.

Video footage showed Uruguayan national team player Luis Suarez crying after the match, which was hosted by Al Janoub Stadium, for the third and final round of the group stage.

Moments before the end of the match, he was trying to inform his teammates on the field of the need to score another goal in order to outperform Korea and ensure qualification.

Ghana fans celebrate despite the exclusion

On the other side of the same match, scenes circulated on communication platforms showed the Ghanaian fans celebrating the moment the match ended and hearing about the qualification of the Korean team on goal difference, as a kind of healing for the team that prevented them in the 2010 World Cup from reaching the semi-finals for the first time in their history in the World Cup.

Scenes from the match showed a violent reaction from the Uruguayan players to the referee, Daniel Seibert, in protest at his decisions.

It is noteworthy that a number of matches in the third and final rounds of the first round of the Qatar World Cup 2022 witnessed similar scenarios and mixed feelings of anticipation, sadness and joy.

In Group D, Tunisia qualified after scoring a goal against France, but Australia scored a goal in turn against Denmark to get the qualification card.

In Group E, the Japanese national team managed to score a controversial goal in its match against Spain, to snatch the qualification card and lead the group and expose Germany to elimination.