Arab tears, a controversial goal, and a dialogue between Messi and Lewandowski .. Watch the harvest of day 11 in the World Cup

A sad Arab day, the one that Arab football fans experienced in the last rounds of the third and fourth groups, after Tunisia and Saudi Arabia were eliminated from the competition. 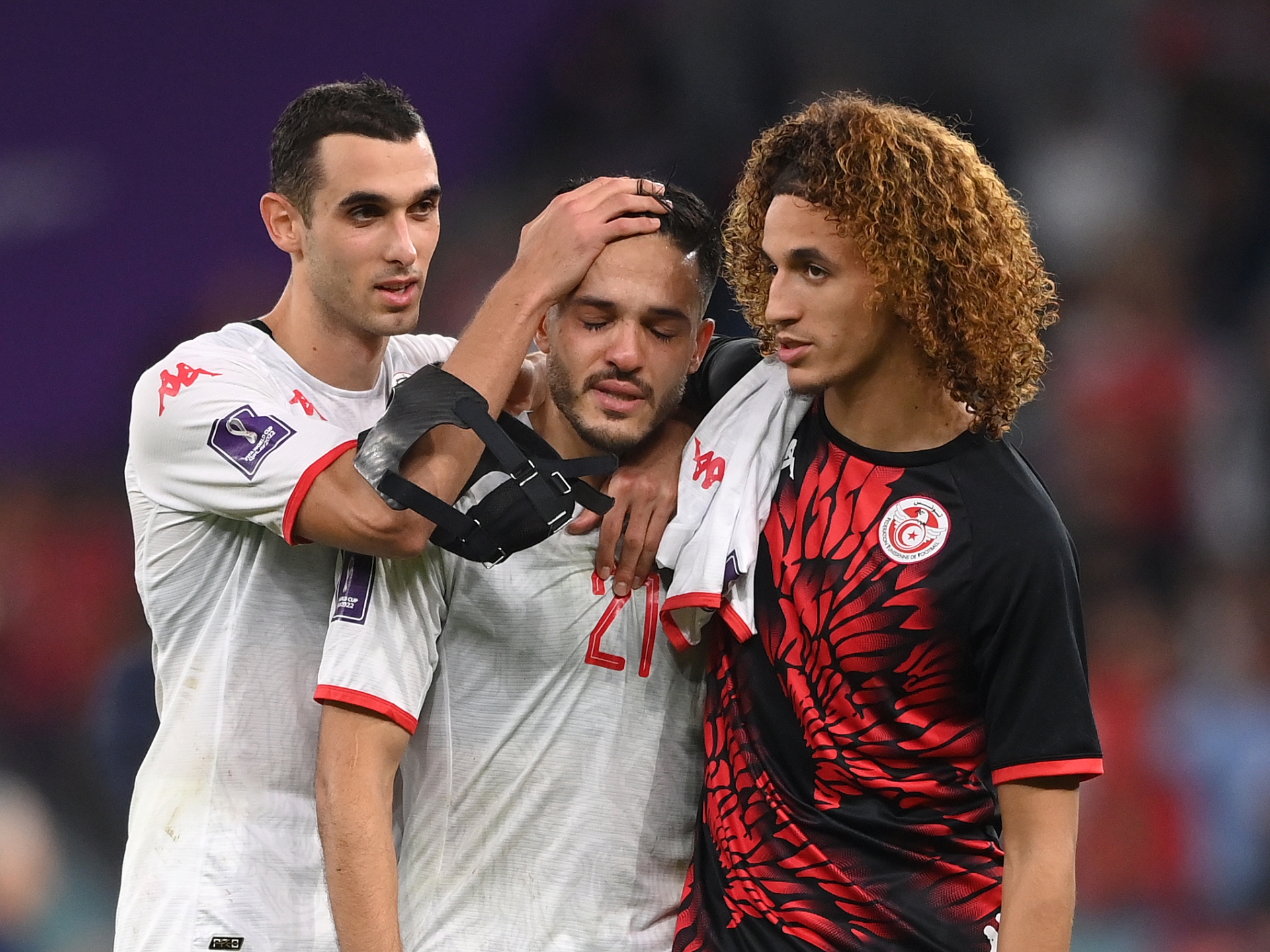 A sad Arab day, the one experienced by Arab football fans in the last rounds of the third and fourth groups of the World Cup finals.

Tunisia did not achieve the "miracle", despite its victory over France 1-0, nor did Saudi Arabia repeat the achievement of the 1994 tournament after its surrender to Mexico by 2-1, to end the dreams of the "Carthage Eagles" and "Saudi Green" in the "Arab World Cup".

Day No. 11 of the World Cup gave Lionel Messi the pass to the second round with Argentina, and he smiled at Robert Lewandowski as well, giving him the qualification card despite the defeat.

While Australia imposed itself as the biggest beneficiary, following its historic victory over Denmark with a goal of gold and accompanying defending champion France to the second round.

As was the custom in the days before the first World Cup to be held on Arab lands, this day was not without distinctive clips that aroused the attention of followers, and received wide interactions on social media platforms.

The "miracle" was very close to being realized, and the great joy almost exploded on Habib Bourguiba Street there in the capital, Tunis. The most difficult task - that is, beating France - had been accomplished, but the Danish attackers left hope behind, and were unable to amend, so all dreams ended.

Perhaps the image that most expresses what the Tunisians felt was the image of a Tunisian cheerleader in the stands, as she surrendered to her pouring tears.

The most precious Tunisian free tears affected our most important person at the time when the referee calculated the equalizer in favor of France, but the Var said no because there is clear infiltration and for the date: 11/30/2022 time: 17h57 I recorded it because it is the tears of the free, patriotic, honest Tunisian woman, the result is 1-0 in favor of Tunisia pic.twitter .com/lA4YFmUEjk

Despite this, a number of Tunisians expressed their pride in their country's national team, which achieved a historic victory that will remain firmly in the minds of the world champions.

The stars of the Saudi national team could not hold back their tears after their defeat against Mexico, and the end of their adventure in the Arab World Cup, and they expressed their great sadness after the defeat and exclusion.

The tears of Salem Al-Dosari, who scored the historic goal against Argentina, and one of the most prominent stars of Al-Akhdar during the World Cup, collapsed, while his colleagues tried to console him.

Before the start of the tournament, some were calling for the foot

of another goalkeeper, however Al Owais was not affected. He participated

In addition to Al-Dosari, the brilliant Saudi goalkeeper, Muhammad Khalil Al-Owais, was unable to hold back his tears after the match, in a touching scene that pleased the hearts of Saudis and Arabs.

For Messi to sign his first missed penalty kick in this tournament, knowing that he was behind scoring the first he got in the Saudi match.

This is the second consecutive penalty kick that Chesney has saved in this World Cup, after the first in the previous match against Saudi Arabia.

Camera lenses revealed that there was tension between Messi and Lewandowski during the match, as the Polish star tried to extend his hand to shake hands with Messi during the meeting, but he refused to exchange greetings after a collision between them.

In your opinion, what happened between # Messi and # Lewandowski after the match # Argentina and # Poland?

But it seems that Leva refused to leave the stadium without returning the water to its tracks and reconciling with Messi, who was angry with him, and this is what actually happened after the final whistle, as the two sides exchanged a bilateral dialogue before returning to the dressing room.

Why did the referee reject Griezmann's goal?

Griezmann celebrated a fatal goal for France against Tunisia, but his celebrations quickly faded after he was rejected by New Zealand referee Matt Kongi immediately after returning from the mouse screen.

Those watching the match initially thought that the reason for the cancellation was the presence of the Atletico Madrid striker in an offside position, which made them denounce the referee's decision, because the defender was the one who played the ball with his head;

But the decision to cancel came because French player Randall Colo Moanier pushed his hands - and clearly - Tunisian defender Montaser Talbi just before the goal, which caused the latter to fall to the ground.

The referee returns to the mouse and cancels Griezmann's goal ❌⚽️

The referee went to review the situation on the video screen, before deciding to cancel the French equalizer, amid the joy of the Tunisian team.

And in a precedent in the competition, French press reports stated that the French Football Federation is heading to file a complaint with FIFA, claiming that the referee refused a correct goal by Antoine Griezmann.