A prayer for Imam Achraf, an Arab and Muslim icon who congratulates Ramandan and whistles in Israel

Imam is "he who preaches the faith." The term is used to call the person who leads the collective prayers in the mosque, but it has several meanings, different... 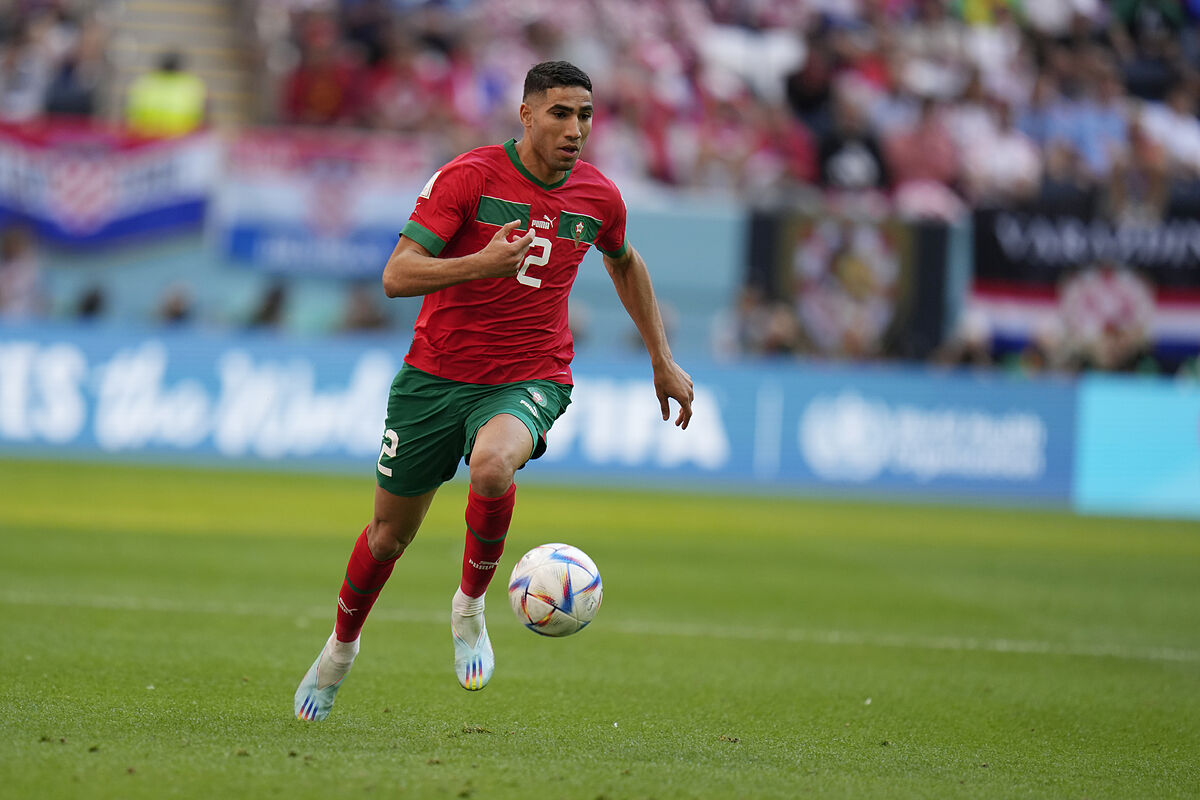 Imam is "the one who preaches the faith."

The term is used to refer to the person who leads the collective prayers in the mosque, but it has several meanings, different between Sunnis and Shiites.

He is a practicing Muslim born in Madrid, who keeps Ramadan and feels deeply identified with his family roots.

It is the reason why he chose Morocco, although he could have opted for the Spanish team.

He never brought it up.

It is the reason, money aside, why, among many other destinations, he decided to play for PSG, in Paris, a city with a large Muslim community.

It is the reason why, despite the muscular problems with which he finished the match against Croatia, he will take risks to play against Belgium.

"This is a World Cup, you have to die on the field," said coach

when asked about the status of his best footballer.

Achraf is so much more.

His figure appears in many places in Doha, giant on the facade of the buildings of the financial city that closes La Corniche, or small in local subway advertisements.

In a tournament without

, as Egypt did not qualify, and with

escaping at dawn due to injury, the Moroccan is the greatest individual benchmark in the Arab world, despite his youth.

«I am a product of Moroccan culture.

At home we have always spoken Arabic, my mother cooked Moroccan food and I am a practicing Muslim”, explains Achraf, who used to sit with his father as a child to listen to the stories of his country's great footballers.

among them, two of the heroes of the team that achieved the best qualification in a World Cup, the quarterfinals in Mexico, in 1986. «Now we are young people who have the ambition to do great things together and give our best for our people”, adds the player, inflamed whenever he talks about the country where his parents were born and about which he feels deeply.

The first game in Qatar resulted in a draw against Croatia (0-0) that the Moroccans valued as a victory.

"I had contacts with the Spanish team, but I always knew that I would play with Morocco," he reiterates, despite assuming that his title aspirations would be lower.

decided otherwise, but a change in FIFA regulations allowed him to return to Morocco after his lack of progress.

Saudi dropped one of the first bombs in the World Cup with the victory over Argentina, but its star and scorer,

, plays in his country's league and was valued at one million euros before the tournament.

The visibility granted by one of the greats of the Champions environment is incomparable.

With Iran it is different, selection of a country of Persian culture, which has fought throughout its history against Arab domination and lives under the yoke of one of the most extreme interpretations of Shiite Islamism.

The heroism of its footballers, without singing the anthem in solidarity with the protests in their country after the death in

a woman who did not wear the veil correctly, is of another order.

Not only in Morocco, then, a prayer is said for this imam who wears a short.

The first World Cup in the Arab world has aroused sensitivities among its population, beyond the performances of power like the one we saw in the box of the Al Bayt stadium, during the opening of the tournament, with the

as sponsors of the summit.

Religion and the couple

Achraf grew up in Madrid and at Real Madrid, where Zidane gave him his first-team debut.

Close to the son of the then coach, Luca, there was also a connection with the coach, by origin and by faith, although ZZ is not a practicing Muslim.

She was born in Madrid, she like Achraf, she and the daughter of Tunisian migrants, before embarking on her film career, she graduated in Arabic philology.

The actress has publicly made Achraf know, through the networks, the pride she feels in her way of interpreting her identity.

The player takes her beyond religious and Moroccan, aligning herself with causes in the Arab world that she considers just.

, freedom for Palestine, he wrote on Twitter, a fact that cost him to be whistled when he went with PSG to play in Tel Aviv, the city that has hosted the French Super Cup.

"Eid Mubarak for all Muslims in the world," the couple wished on the last day of Ramadan, last May, through their profiles on social networks.

is wished , happy day, and the family has breakfast.

The Muslim world is much broader than the Arab world, as the Islamic Museum of Doha, next to Stadium 974, wants to demonstrate in its innumerable rooms. The most sustainable and innovative venue in the World Cup along with the oldest copies of the Koran.

Qatar wants to be the Arab reference in everything, and it has the resources.

Then come cultural or territorial rivalries.

In the last Champions League final, in Paris, migrant fans were divided according to whether they were Arab or African.

The first, with Madrid for Benzema, French but the son of Algerians;

the latter, with Liverpool for Mané, a Senegalese.

The prayer of all of them, today, is for Achraf.