World-2022: Poland gives a lesson in realism to Saudi Arabia

Poland got the better of Saudi Arabia (2-0) on Saturday. The Poles, more realistic, were dominated by Saudis willing but too imprecise in the last gesture. 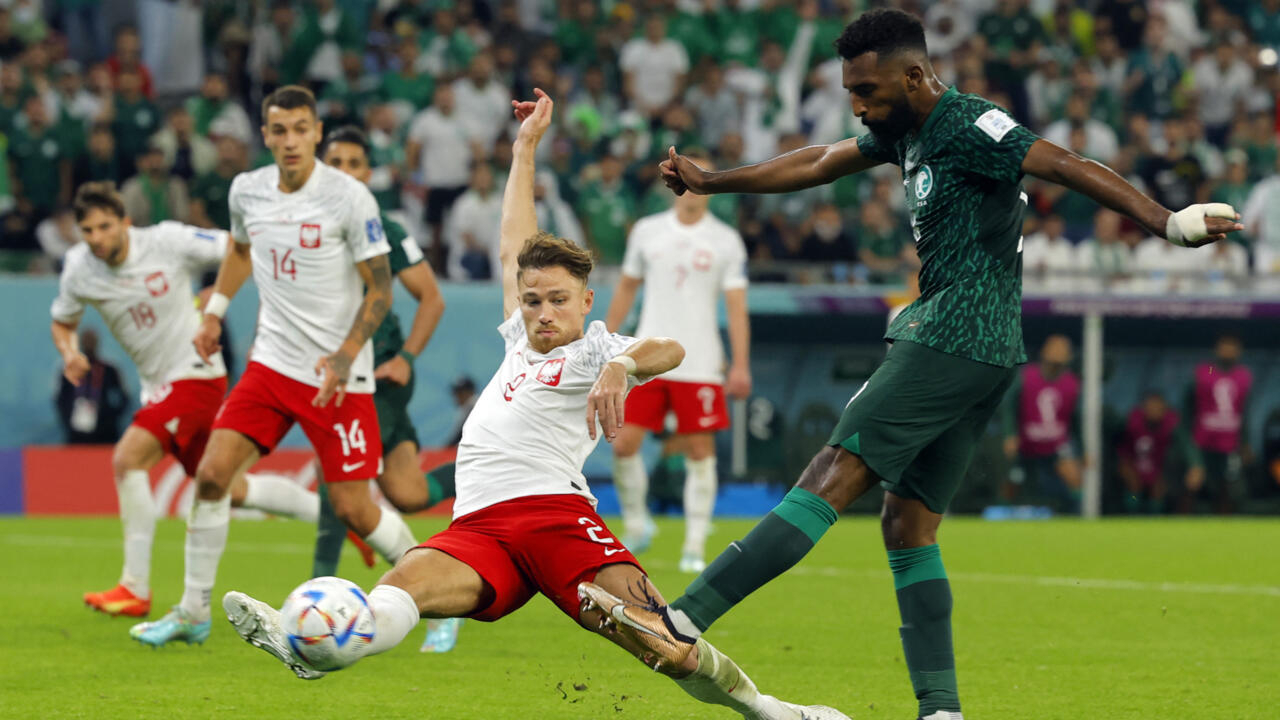 With 4 points on the clock, the Poles are in a good position to qualify for the round of 16 before the last day of the group stage.

The Saudis and the Poles start the match at a good pace but without giving any chances.

Poland tries a dangerous center but the goalkeeper AL-Owais is vigilant and captures the ball (6th).

Al-Burayk also lights a first fuse on a shot from 25 meters but the ball is deflected for a corner (8th).

Then Kannno gives the Saudis their first big chance by sending a curled shot into the opposing cage, which Szczesny slams for a corner (13th).

During this start of the match, Poland suffered the domination of the Saudis who played uninhibited.

They often find themselves forced to intervene at the wrong time and are logically warned several times (Kiwior in the 15th, Cash in the 16th and Milik in the 19th).

Saudi Arabia multiplies the phases of possession near the Polish surface, but does not find the fault for the moment.

Poland relies on a set piece to create danger: Bielik's header takes the path of the net but it is finally deflected for a corner (26th).

The Saudis are able to create gaps but lack precision in the last gesture, like this dangerous center which is not taken from the head in the Polish surface (33rd).

Poland, not very threatening since the start of the match, is however the first team to open the scoring in this match: Lewandowski serves Zielinski who lodges the ball under the crossbar (39th, 1-0).

A few minutes later, on contact in the Polish area between Bielik and Al-Shehri, the referee will watch the VAR images and whistle the penalty.

But Szczesny pushes back Al-Dawsari's shot then Al-Burayk's shot in stride, a double parry that leaves his team with a short advantage (45th + 1).

Despite ten minutes of additional time for this first period, the score did not change and it was Poland who returned to the locker room with an advantage on the scoreboard.

Poland hit the uprights twice... then score a second goal

The second period resumed at the same pace as the first: although behind, Saudi Arabia forged ahead and the Poles were curled up in their camp.

Al-Dawsari tries a shot but it ends far from the Polish cage (54th).

Saudi Arabia believe in equalizing on the following action: after a scramble in the Polish area, Al-Dawsari emerges to send the ball into the opposing nets but Szczesny is still decisive and pushes back the shot (55th).

AL-Buraikan also creates a great opportunity but his powerful shot goes just above the crossbar (60th).

The Poles are struggling to exist in this second act, until the head of Milik who is pushed back by the Saudi crossbar (63rd).

Shortly after, the red and whites created another big chance, but Lewandowski's deflection ended on the Saudi post (66th).

Al-Dawsari then tries a shot at the entrance to the Polish area, but without concern for Szczesny (69th).

Saudi Arabia has struggled for a few minutes to create danger, while Poland manages its lead and could even have taken cover twice during this second act.

Al-Malki tries a shot to return the score, but the ball escapes the frame (78th).

When entering the last ten minutes of regulation time, the Green Falcons are struggling to materialize their good intentions on the scoreboard.

And Poland, realistic, ended up killing all suspense: Lewandowski took advantage of a huge defensive error from Al-Malki to present himself alone against the Saudi goalkeeper and slip the ball into the net with a flat left foot (82nd, 2-0).

After this second goal, the Saudis – who spared no effort during this meeting – seem resigned.

With a little more precision, Lewandowski could even have scored a double (90th).

But the main thing is there: Poland was dominated, but it was she who finally took the three points.