Mbappé imposes the order of the champion, takes France to the round of 16 and reaches the top of the scorers in Qatar

A champion has to put order, and do it soon if she doesn't want her throne to be moved. She must also do it, who wants to be king. Kylian Mbappé wants it with anxiety. The... 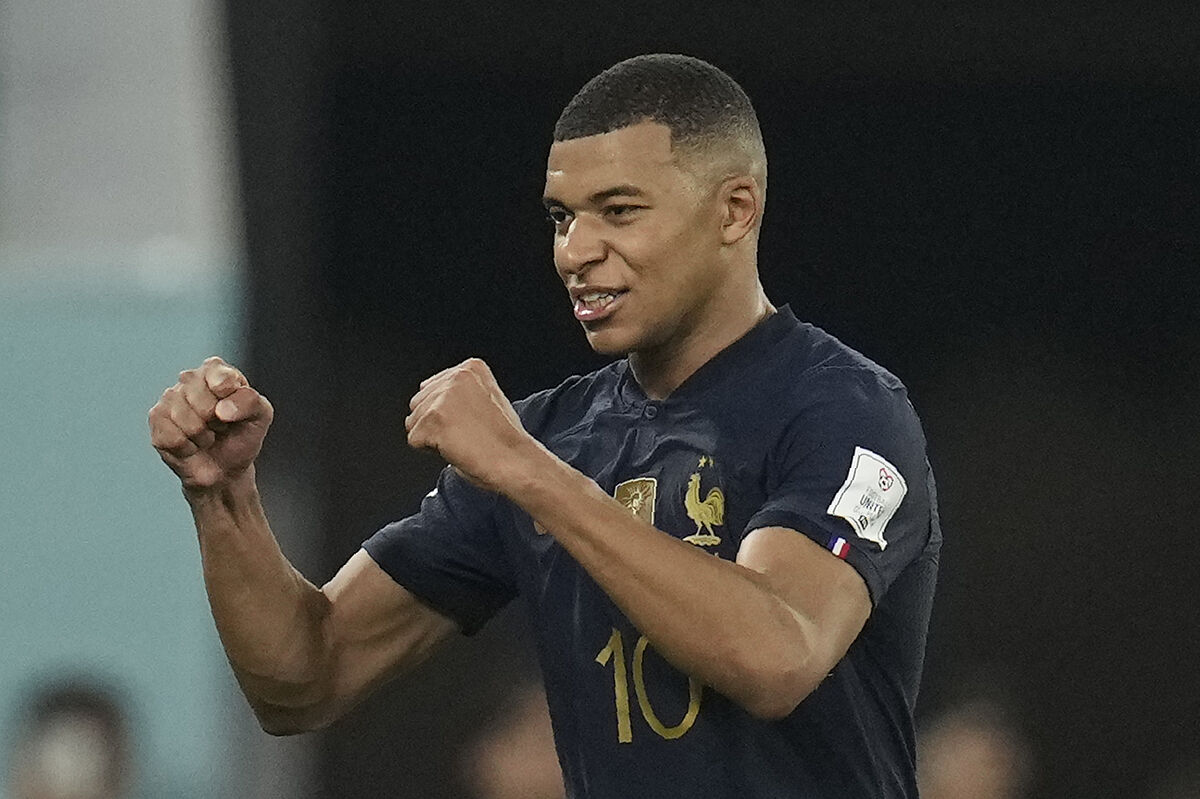 A champion has to put order, and do it soon if she doesn't want her throne to be moved.

She must also do it, who wants to be king.

wants it with anxiety.

The way of celebrating the second of his goals against Denmark, of beating his chest hard, is an act of affirmation.

Two goals to put France ahead twice against the Danish rock, take it to the round of 16, now virtually as first in the group, and equalize the Ecuadorian

, both with three goals, in the table of goal kings.

That, however, is not the reign that interests Mbappé the most.

The way to enter the World Cup speaks well of France, despite its structural deficiencies, and of its leader, a role that the PSG footballer assumes after

In his debut, he had to unleash an offensive cyclone to overcome Australia's goal.

Against Denmark, yesterday at the 974 Stadium in Doha, he reacted again to win (2-1).

For a team that is always emotionally brittle and with clan warfare endemic, it is a good sign.

will be able to manage resources against Tunisia before the round of 16.

The win against the Oceánicos (4-1), in combination with the other results in group D, practically guarantees them first place, but since goal difference prevails, they will have to wait for the last day to be mathematically so.

Deschamps once again decided on the trio of aces against a Denmark that would be unleashed, something that he showed when he had to.

Within minutes, he matched Mbappé's first goal, thanks to an arrival in the box by Barcelona

Deschamps does not have poker face cards for poker, although what is in front of him is a lot.

offer many offensive profiles, although the needs of the team force the Atlético player to take steps back, with Giroud, at 36, as a stake in the area.

He is a puncher, but not a 'joker', like Benzema.

A three of a kind is always a good hand, but it doesn't usually raise the bank or throw the other players off the table.

Dembélé initially assumed the role of agitator in a tactical clash due to the profile and situation of the teams.

Denmark is a rock, only when it finds space, it unleashes like an avalanche.

As natural phenomena, it is very once in a while.

The tie against Tunisia, in which she was overwhelmed at times, showed that she is not in this World Cup with the same freshness with which she appeared in the last Euro Cup, not for now.

case , then she was reborn.

Eriksen is back in his place, midfield, and Denmark looks more like it almost always has, with extraordinary exceptions, from

and the generation of '92, who left their beer cans on the beach to become European champions.

We are not facing one of those cases in Qatar.

The clash had to be shaken and Dembélé did it his way, with conductions, overflows and centers.

There are few players with his ability to move forward as if he were skating.

The feeling is that he does not step on the grass.

If he always knew what to do when he stopped, we would be looking at something supernatural.

For now, we are facing a player with a superlative quality.

An action in the first half showed that duality.

He started from his band, on the French pitch, and dribbled up to three rivals.

When he had eliminated enough pieces to wreak havoc in Denmark, he stopped and swept past.

The French attack found all the Nordic pieces back in place.

He needs a coach and he needs to listen to the coach.

Dembélé could be more, a scandal, but with what he is, he can start wherever he wants.

With the passes that must be given to overcome a line, the Barcelona player does it instinctively.

Don't ask him how, he doesn't know.

He lets his body act.

could not hit fully and another from

cleared in an acrobatics occurred thanks to his crosses.

On the opposite flank, Mbappé, with whom he shares qualities, was less prolific in the first period, but woke up after the break, unstoppable vertically, putting France ahead after a perfect combination with Theo

, who returned the ball in the second half.

Theo has stayed with the band of his brother Lucas, who left the World Cup injured in the first game.

Unlike Dembélé, the PSG player knows what he wants to do, what options he has, before starting.

He is, today, on another level.

His change of pace is unsustainable, but the surveillance to which he is subjected, always with help, has nothing to do with the past.

It suits Mbappé that Deschamps accumulates talent in attack, because that way the opposing defense has to maintain the zone instead of carrying out individual pursuits.

The French coach does it, however, because it is where he has the best cards.

, the midfield is supported

, correct, very academic, but not differential.

Rabiot has the soul of a playmaker, which forces Griezmann to position himself and work more from the inside.

When he stepped into the area against the Danes, he showed that it is his habitat, fast and dangerous.

With two great controls, he failed in the definition, but was seen in all his precision with the center of the decisive goal to Mbappé.

He hit with the body because he went into the finish with everything.