Argentina, Brazil, France… Who are the favorites for the 2022 World Cup?

The 22nd World Cup in football history takes place from November 20 to December 18 in Qatar. Like every four years, some teams stand out to be favorites. State of play. 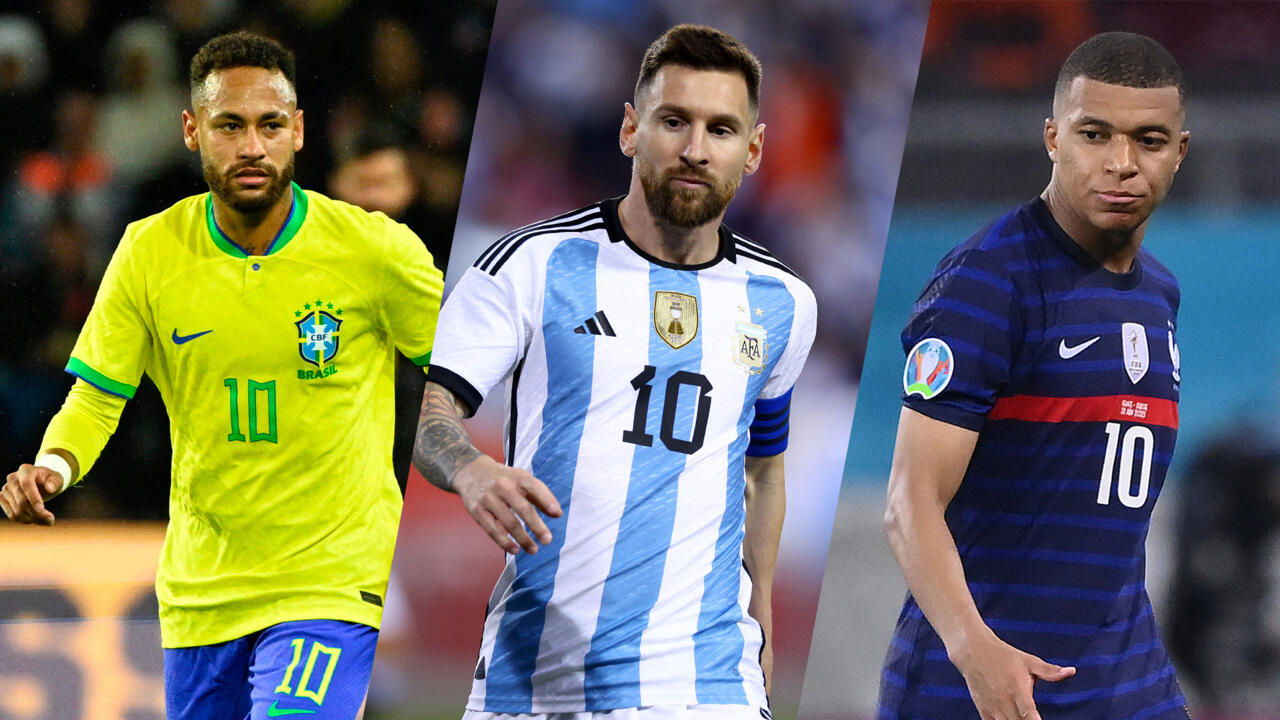 Who to succeed France at the World Cup in Qatar?

If the Blues are regularly cited as a natural favorite, others can claim the crown.

Winner of the 2018 Cup in Russia, the French team is the selection to beat for many participants.

Since this title, France has also won the League of Nations.

Its strong point is the star attack: two of the six players leading the last Ballon d'Or (Benzema 1st and Mbappé 6th) make it up and it can also count on Antoine Griezmann, Olivier Giroud and Ousmane Dembélé.

However, the Blues remain fragile.

She lost her magic doublet in the middle, Paul Pogba and N'Golo Kanté are forfeited, while in defense she will present herself without certainties between a recovering Varane, a now forfeited Kimpembe and newcomers without experience.

A statistic also plays against them: since 1998, five of the six defending champions have seen the exit from the group stage.

Record holder of the number of world champion titles (5), Brazil is a must when it comes to favorites for a football World Cup.

This year, the antiphon is even truer.

The nation of football is currently at the top of the Fifa rankings and can rely on a dream attack: Neymar in form since the start of the season with PSG (15 goals and 12 assists in 19 matches) supported by Vinicius Junior ( Real Madrid) or Gabriel Jesus (Arsenal).

Brazilian coach Tite, who is probably playing his last World Cup at the head of the Seleção, also has an experienced defense at his disposal with Thiago Silva and Marquinhos as well as Dani Alves, 39.

Eight years after the World Cup fiasco at home and the humiliation at the hands of Germany (7-1), time is running out for this Brazilian generation: this is probably their last chance at the world crown.

The Brazilian public has been waiting for a world title since 2022, an eternity for them.

Under the leadership of Lionel Scaloni, in office since 2018, the Albiceleste has gained in consistency to become one of the favorites.

Since 2019, Argentina remains on a series of 35 matches without defeat, two units from the record of Roberto Mancini's Italy, and should probably beat him during this World Cup.

The Argentinians are also the last team to beat another favorite, Brazil.

It was in 2021 in the final of a Copa America that the country had been waiting for 28 years.

After finally lifting a major trophy in the selection, "Leo" Messi should have the fangs to do the same in Qatar and lift the only trophy missing from his collection.

Portugal: aging Ronaldo and an armada to support him

Just like his best enemy Lionel Messi, Cristiano Ronaldo will experience his fifth in the world in Qatar.

The five-time Portuguese Ballon d'Or, however, is moving forward shrouded in doubts: lacking playing time with Manchester United, less sharp with Portugal, the superstar seems to be showing some wear and tear.

Fortunately in the quest for a first star on the Portuguese jersey, he can count on a team with world-class players on all lines.

Germany, beware of the sleeping bear

Has Germany ever been so little feared?

However, everyone knows that "football is a sport that is played eleven against eleven, and in the end, Germany wins".

If the team is in full reconstruction, Hanzi Flick has concocted a tasty team mixing glorious old, promising young people and confirmed players.

In the first category, Mario Götze, Thomas Müller, Manuel Neuer and Matthias Ginter, the four survivors of the coronation in Brazil eight years ago.

In the second, Flick is betting on Jamal Musiala, 19, the very young Youssoufa Moukokopas, not yet 18, a birthday he will celebrate on the day of the opening match on November 20.

After the fiasco of the 2018 World Cup in Russia, ended to everyone's surprise in the group stage with a defeat against South Korea (2-0), Germany wants to restore its image, 18 months from hosting the Euro-2024.

For the first time in its post-war history, the German selection did not reach the quarter-finals of a major tournament twice in a row (World or Euro), since 18 months ago, at the Euro-2020 shifted by a year, the Nationalmannschaft lost in the round of 16 against England (2-0).

Other nations can do well:

: after a semi-final in 2018 and a final lost at the last Euro, the Three Lions have a card to play in Qatar.

Harry Kane, Raheem Sterling, Phil Foden or even Mason Mount will put their talent at the service of the English nation which is awaiting its first major title since the world championship at home in 1966.

: semi-finalist of the last Euro, La Roja is one of the football sensations of the moment.

Luis Enrique offers a flamboyant game that relies above all on the collective.

Rather young, Spain has no real star but relies on a solid midfielder embodied by Pedri and Gavi, the two Barcelona nuggets, the latest winners of the Raymond Kopa trophy for best young player.

: less than a year after the first title in their history at CAN-2022, the Lions of Teranga are ready to make a whole people dream.

With its world-class players on all lines (Edouard Mendy, Kalidou Coulibaly, Idrissa Gueye, Sadio Mané), Senegal hopes to break the African glass ceiling in the World Cup, the quarter-finals.

However, bad news has darkened the hopes of the Senegalese: Sadio Mané was injured a few days before the World Cup.

Despite his presence in the roster, he might not be reinstated until the eventual round of 16.

veterans of La Celeste, Luis Suarez and Edinson Cavani, top scorers in the Uruguayan selection who will play their fourth in the World Cup, will guide promising young shooters, Federico Valverde and Darwin Nuñez.

What to dream of a last place in the last four, or even better even if Uruguay has not won the world title since 1950.