Hazard runs out of patience: what to do with the highest paid who never plays?

In the absence of playing minutes, Eden Hazard left two images on Wednesday that summarize his current status at Real Madrid. Minutes before the start of the game against... 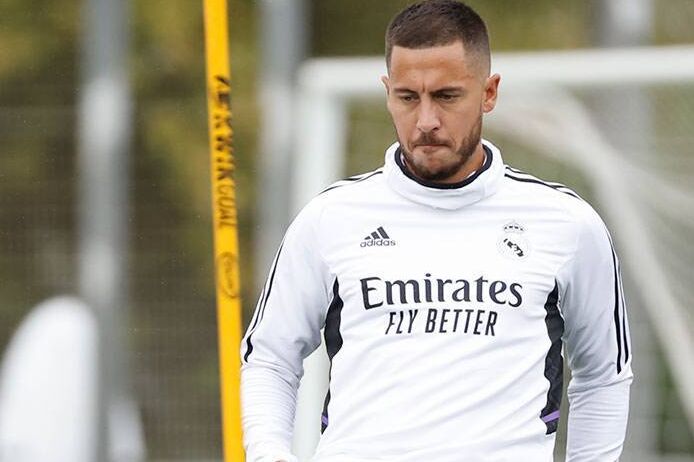 In the absence of playing minutes,

left two images on Wednesday that summarize his current status at Real Madrid.

Minutes before the start of the game against Shakhtar, the Belgian was surprised to raffle with

- rock, paper or scissors - his seat on the bench.

Two hours later, the two hurriedly paraded before the cameras, while the defenseman devoured a slice of pizza.

Hazard, who had jumped to warm up in the 64th minute, did not have an opportunity in the Champions League either.

For the fourth consecutive game,

had left him out of his plans.

Hazard trained on the wing under the orders of the physical trainer,

During that final stretch,

already dragging cramps in a calf.

His had been the 1-0 and the pass for

' goal against the Ukrainian champion, so the stadium fired him with a resounding ovation.

The young Brazilian, distinguished by UEFA as the best of the night, had once again shown his coupling to the position of second striker.

Precisely where Hazard has been most expected.

Just a month ago,

was injured in Glasgow and Hazard took his place, contributing a goal and an assist.

"I'm not going to ask him to score, but rather to play like against Celtic and maintain a good offensive attitude," Ancelotti announced prior to the match against Mallorca.

That ownership is today far away.

While the left-hander has not played a single minute again, Rodrygo has taken advantage of his opportunities in LaLiga, being decisive, for example, in the Metropolitano against Atlético.

Vinicius and Rodrygo, from 9% to 66% of Madrid's goals

Vinicius and Rodrygo, from 9% to 66% of Madrid's goals

The irrelevance of Hazard, on the other hand, would be even more evident last Sunday against Osasuna, when Ancelotti preferred to give way to

, arguing that during that final stretch he needed aerial play.

"He has not talked to me because he knows the situation, which is the same as that of other teammates. There is a lot of competition and some play less,"

sentenced , with his usual phlegm.

In any case, the weariness with Hazard's poor performance has crossed the walls of Valdebebas to filter into the noble zone of the Bernabéu.

The patience with the most expensive signing in the history of Real Madrid seems to have run out.

And that, unlike what happened with

, there is no discomfort with the attitude of the Belgian, who has finally managed to redirect the course in the physical section.

Although it sounds extravagant, for the first time since he landed in July 2019, Hazard has gone three months without injury.

Since then he has not caused casualties.

Behind him are the 16 physical problems, from Covid to a string of muscle punctures, which had prevented him from any hint of continuity.

However, even when his health respects him, the level of the winger is not enough for Real Madrid.

To this evidence we must add the economic issue, since Hazard, with a contract until 2024, is the best paid in the squad, with almost 23 million euros gross per season.

Double that of Vinicius and almost triple that of Rodrygo, to name just two examples.

For a long time, the containment of salary expenses has been an unquestionable pillar for

And the departures of Bale,

last summer confirmed that the club will not allow more astronomical salaries.

Right now, the only hope for Hazard lies in the World Cup in Qatar, given that there he could boost his undervalued cache, which today does not exceed 12 million, according to Transfermarkt's estimate.

Meanwhile, in Belgium there is also debate about the ownership of its captain.

And about the party, in a Brussels nightclub, before the last defeat against the Netherlands in the Nations League.

Eden, a father of five, hasn't even wanted to fight the rumours.

He has enough with his endless losing streak in Madrid.