Between silence, work and the war in Ukraine: the opportunity of Lunin, the "monk" of Real Madrid

On his wedding day, Andriy Lunin (Krasnohrad, Ukraine, 1999) appeared in a gray tracksuit and white sneakers. She, Anastasia Tamazova, repeated the set of the future of her ... 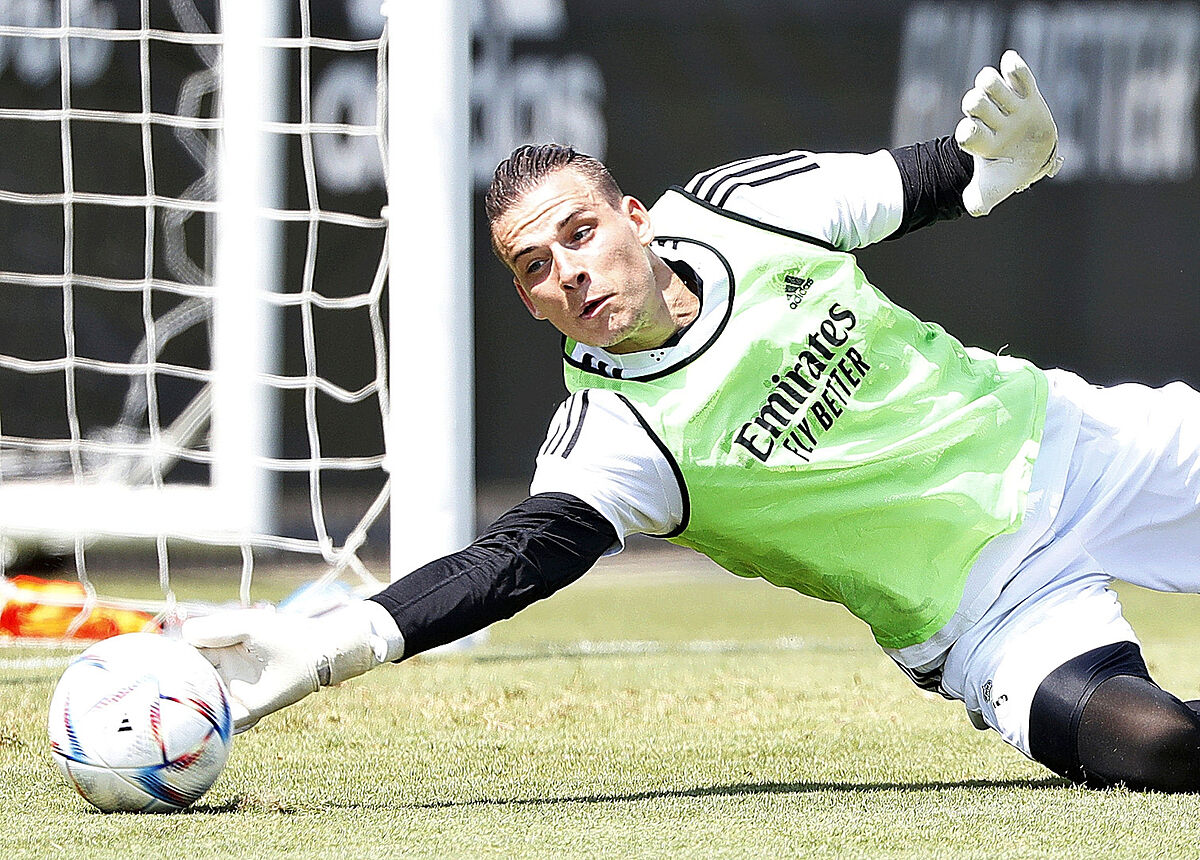 On his wedding day,

(Krasnohrad, Ukraine, 1999) appeared in a gray tracksuit and white sneakers.

, repeated the outfit of her future husband, although with white colors.

They celebrated the ceremony in

, privately and civilly, and its echo reached the sports city of

, where they joked with the young goalkeeper throughout the week.

It was, the people close to the Madrid dressing room say half jokingly, one of the few times they have seen the goalkeeper laugh out loud.

The reality of Lunin cannot be understood, logically, without

the war in his country

a sober and even "mysterious" character

, they say from the club, the Russian invasion of Ukraine has forced him to be part of a

from which he has always stayed away.

for weeks at a local

, has participated in events in Madrid with

and has even been seen in some

against the military action of the Government of

"Live the war in silence"

«He lives the war in silence, like a monk», they reveal from Valdebebas, where they highlight his «professionalism» during these years: «He is very serious, but

he only lives to train

It doesn't matter what time it is or what he has rested », they value about a characteristic that has amazed the locker room.

The situation in Ukraine has the squad and the coaching staff on edge and at the time they were offered to take "a few days" to assimilate everything.

But Lunin remained anchored in his professionalism.

Nothing seems to affect him publicly.

He has never given a problem

, as a starter and reference, and

, the goalkeeper coach, are his main supporters in the locker room.

But they are just that, because Lunin's interior is "

before the war, the invasion has not changed his way of being, something that is respected in the Madrid squad, even more so in these circumstances.

The Ukrainian has a family in the country and is still waiting for all the help that can be offered, but now his professional career has taken a 180-degree turn due to Courtois' injury.

He was already a starter against

, in what meant his

debut in this League

eighth game in the competition

first appearance in the Champions

in a Madrid duel since the white team announced his

, more than four years ago.

Since then his life and his career, which had gone at the speed of light, have hit the pause button.

first team in the highest category of Ukrainian football.

That summer he went to

, with whom he played in the

and made the leap to the

At the Bernabéu he went from protagonist to luxury spectator.

From Ukrainian soccer star to second to one of the best goalkeepers in the world.

For any other young player, having an elite footballer ahead can be positive, but there are hardly any rotations in goal.

For three years, the board has tried to find

minutes for him in Leganés, Valladolid and Oviedo

, but it has not exploded.

Since his arrival in Madrid, Lunin has accumulated only

, 20 of them with the Asturians in the Second Division.

For all this, this week as a starter could be a

His contract ends in 2024 and he will have to make a decision: continue with the Madrid Master in the shadow of Courtois or seek his own path, the one that for now will put Chamartín's sticks low in the European Cup.