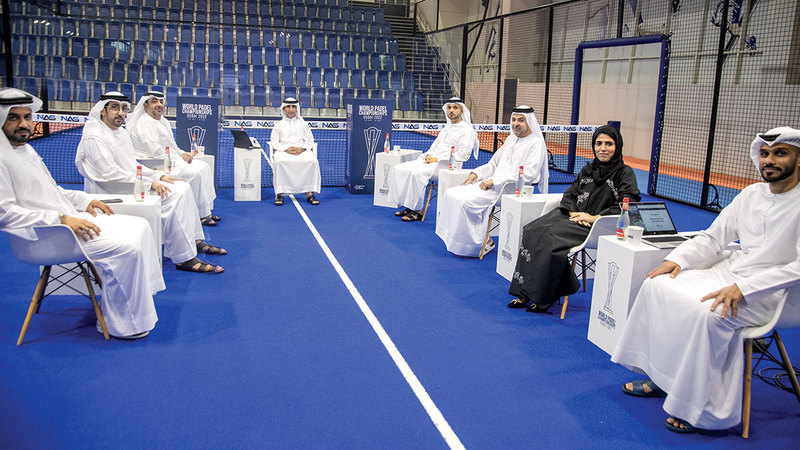 Saeed bin Maktoum, while presiding over the meeting of the Organizing Committee of the Paddle Tennis World Championships.

The Organizing Committee of the World Padel Tennis Championship held its first meeting, chaired by Sheikh Saeed bin Maktoum bin Juma Al Maktoum, President of the Federation and Chairman of the Organizing Committee for the tournament, which will be hosted by Dubai from October 31 to November 5, at the Dubai Duty Free Tennis Stadium, in cooperation with Dubai Sports Council and Dubai Department of Economy and Tourism.

The organizing committee said in a statement, yesterday, that the meeting reviewed the timetable for the preparations program to complete the completion of the championship village, the media center and crowd areas, and the various services provided to guests, in addition to reviewing the stadium implementation plan, which includes the preparation of eight stadiums, including the main stadium, and subsidiary stadiums. Others with international standards to host some matches and players’ training.

The statement added that the organizing committee reviewed the arrangements that have been completed so far, and approved the best ways to make the tournament a success, and provide the best services to the participants.

The committee was reassured about the ongoing preparations for choosing the official hotel for delegations, logistical arrangements, the official dinner party, and the distribution of the tasks of the work teams from reception at the airport to accommodation hotels.

The statement revealed that the members of the committee presented many proposals that will be studied and discussed in future meetings, to ensure a distinctive hosting of the global event, whether in terms of technical, organizational or public attendance.

The Vice-Chairman of the Organizing Committee, Ismail Al-Hashemi, confirmed that the preparations are progressing in a distinguished manner in order to host the first world championship in Dubai.

He said in a press statement: "We are looking forward to organizing an exceptional event, at the level of the good reputation that the UAE enjoys in hosting major international events, and we hope that the Dubai version will be one of the best tournaments in the history of the Padel Tennis World Cup."

Al-Hashemi added: “We are fully aware that the mass attendance is one of the main factors for achieving success in any sporting event, and therefore we will be keen to provide an ideal and unique atmosphere for fans of this game in the fans’ village.”

The tournament will be held over six days, in two separate categories for men and women, with 16 national teams participating in each category.