Teapot or vase?.. A widespread mockery of the Iraqi Super Cup

A state of sarcasm mixed with anger prevailed on the communication platforms in Iraq after the circulation of a picture of the design of the Super Cup, which looked more like a vase or a large glass teapot. 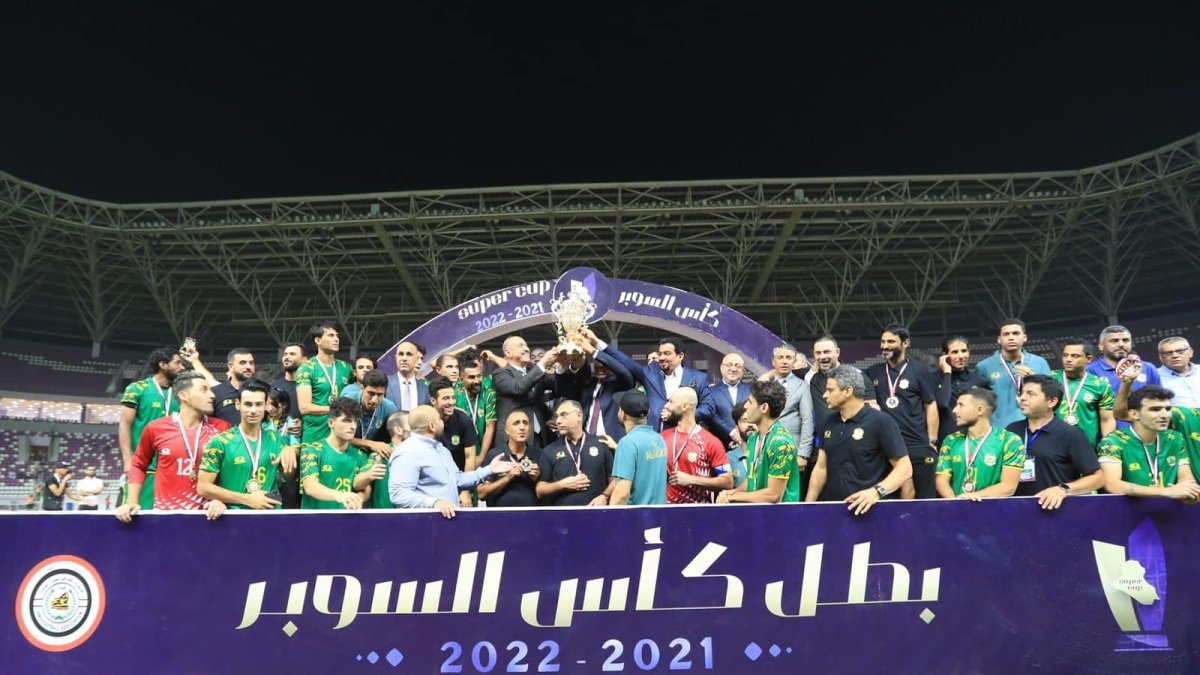 A state of ridicule mixed with anger prevailed on social media platforms in Iraq after the circulation of a picture of the design of the Super Cup, which looked more like a vase or a large glass teapot, which bloggers described as "inappropriate" and a "new football scandal".

Yesterday, Sunday, the Minister of Youth and Sports, Adnan Darjal, crowned the Police team with the cup after defeating its counterpart Al-Karkh with a goal for free, in a match that took place at Al-Madina International Stadium in Baghdad.

Iraqi accounts and bloggers published a picture of a cup-like chandelier, and they said that it was offered for sale in an electronic store in Egypt, and its price is about 4,000 Egyptian pounds (about $200).

You may think it is my home furniture in one of the palaces...

But this is what the Iraqi Super Cup looks like pic.twitter.com/wA9XWb7MQU

The order of the Iraqi Federation arrived from Egypt.# The Iraqi_Super Cup pic.twitter.com/KRxr4FWLFx

Bloggers and activists criticized the Football Association and the Ministry of Sports' underestimation of the football file, accusing those in charge of sports activities of corruption and not seeking to raise the level of sports in Iraq.

"Believe it or not, this is the design of the Super Cup, so let the international federations learn from our experience," journalist Ali Nouri wrote on his Twitter account.

Believe it or not, this is the design of the Super Cup, so the world federations learn from our experience!!

O Football Association, and the understanding who agreed to this design, this is what: No it is (mixer), no vase, no (symbolizing) Jay .. This is what they return!!

The blogger and sports fanatic Nadal said, "The one in the picture is the Iraqi Super Cup. Imagine the amount of taste and visual pollution and the cheapness of the image. Think a little about the level of the person who chose it and approved it."

"The country of sculptors, painters, artists and creators has reached, thanks to the political class, the Iraqi Super Cup being a copper crystal vase that is offered for sale on websites," said journalist Omar Hamid.

The spokesman for the Football Association, Ahmed Al-Moussawi, justified the selection of the Super Cup in this way, saying that it "represents something from the history of Iraq" and said that new things are always subject to criticism and then everyone gets used to the situation.

As the design of the cup was mocked, the "Extra Time" program - which is shown on the Iraqi sports satellite channel - shed light on another scandal during the same match.

And the program published a video revealing that the gold medals ran out while imitating the players during the coronation ceremonies.

The video was accompanied by a comment that read, "Players from the police team did not get medals in a strange and strange situation."