Listunova's triumph, Melnikova's motivation and Nagorny's perseverance: the Spartakiad of the strongest ended with a gymnast tournament

Olympic champion Victoria Listunova made a triumphant return to the competition after a foot injury, due to which she performed only on uneven bars at the Russian Cup in July. The 17-year-old gymnast, in a bitter struggle with Angelina Melnikova, won three gold medals at the All-Russian Spartakiad of the strongest athletes. In men, the all-around was again won by Nikita Nagorny. However, in other types of the program, he did not look so confident, having allowed two falls during the finals on individual apparatus. Read more about the results of the tournament in the material RT. 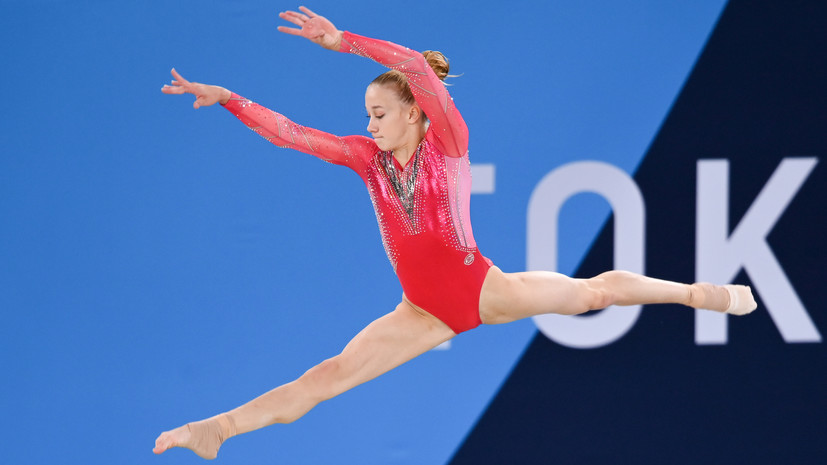 The program of the All-Russian Spartakiad of the strongest athletes ended with the competition of sports gymnasts.

The tournament was held in the capital of Tatarstan and brought together the leaders of the national team, although not all of them are in optimal shape today.

So, the Olympic champion Nikita Nagorny has long ceased to fully train and devotes more time to his projects.

In addition, his back is bothering him, so on the last day of the tournament he even performed on painkillers, and his teammate at the Tokyo Games, Artur Dalaloyan, cannot heal his hands in any way: he has damaged skin on his palms.

At the same time, Ivan Kulyak was able to enter the Spartakiad, suspended for a year by FIG for using the letter Z on his chest during the awards ceremony at the Doha World Cup stage.

The Russian side has obtained permission from the international federation to allow him to the tournament in Kazan.

“Normal mood, it’s hard, but I try not to think about it.

Only about training, and then be as it will be.

If I hadn’t been engaged, and they told me that I could perform, it would, I think, be more insulting, ”TASS quotes Kulyak as saying.

However, all efforts to admit the athlete to the competition turned out to be meaningless.

At the very beginning of the tournament, he was injured while jumping off the uneven bars and eventually withdrew from the Olympics without winning a single medal.

At the same time, fans did not see the dominance of Olympic champions in the male part of the competition.

Daniel Marinov again made a good competition to them.

At the Russian Cup, held in July, he lost to Nagorny in the all-around only because of the regulations.

In Kazan, such a stubborn struggle did not work out.

Nevertheless, the gymnast took third place, leaving behind, in addition to Nikita, another winner of the gold medal of the Tokyo Games, David Belyavsky.

The young athlete got nervous on the second day of the competition and made too many mistakes, although he lost only 0.099 points in total.

Moreover, the young man could easily play for Bulgaria, since he was born in Sofia, but preferred Russia.

“Not that I was offered to change citizenship.

The officials talked to me and thought through different options how they could help me.

As an option, come up with a special contract with a local club.

But rather not from their own goals, but from a sincere desire to help me.

They see that I am young, promising.

And they didn’t want me to disappear, especially since I have a Bulgarian passport, which means they have the opportunity to help me.

But I immediately told them that I did not need anything.

I love Russia, and no matter what happens, I will still play for this country, ”Sport-Express quotes the words of the gymnast.

If in the individual all-around everything ended relatively as expected, then the performance of the Olympic champions on individual apparatus raised questions.

Although such a result can be called expected.

So, Nagorny simply did not have the strength to compete for the third day in a row, and Friday turned out to be a failure for Nikita.

He did not try his hand at the rings, so as not to get a recurrence of a shoulder injury, but on horseback and in floor exercises he made mistakes that led to a fall.

The rest didn't look good either.

Dalaloyan also landed unsuccessfully during the execution of the diagonal in floor exercises, and David Belyavsky on horseback forgot to make an element.

As the athlete admitted, this happened to him for the first time in adult competitions.

“I don’t know what was in my head while I was doing the combination.

Perhaps not fully concentrated, although he felt everything was fine.

It’s good that there is a medal, but I’m not very pleased with my performance, ”Belyavsky explained to TASS.

Thanks to David's mistake, Sergei Naidin won gold in this type of program.

Another Olympic champion, Denis Ablyazin, did not have a good performance on the rings.

The gymnast lost a few precious tenths in the base.

As a result, gold went to 21-year-old Grigory Klimentyev.

The athlete confirmed that it was not in vain that he was the bronze medalist of the World Championships on this projectile.

On the final day of the competition, experienced gymnasts were able to rehabilitate themselves.

As Nagorny admitted, he used all possible methods of recovery: a bath, massage - and it worked.

As a result, on Saturday, October 1, Nikita climbed the podium three times, winning gold in the vault, silver on the crossbar and bronze on the parallel bars.

“Health is always [important] for me.

Today I went out to compete only because this is the last competition this year for me.

I won't be playing again this year.

Maybe I will be in demonstrations, at open training with children or some shows, but most likely not at competitions, ”said Nagorny.

At the same time, the athlete admitted that he was extremely interested in creating a media league in gymnastics, by analogy with football.

“We want to give the guys an opportunity.

It's the same story as in football.

It's about the Media Football League.

I think the systems are similar.

That is, there will be a format of show competitions, ”said the athlete.

Journalists on this day could not get around the topic raised by the head of the IOC, Thomas Bach.

He stated that Russian athletes who distanced themselves from the special operation in Ukraine should be able to compete under a neutral flag.

However, the idea of ​​the official was not supported in the national team.

How can you force athletes to renounce the country they represent all their lives?

Of course, this is a personal matter for everyone.

But I can’t say that we have such people in the national team,” Dalaloyan said.

Arthur, by the way, also rehabilitated on the last day of the tournament, winning silver in the vault.

However, judging by the competition in the current season, the composition of the Russian men's team will be significantly updated for the Olympics in Paris.

There was no big intrigue in the women's part of the tournament.

Moreover, the 17-year-old native of Moscow not only imposed a fight on her teammate, but also managed to win it several times.

The athlete turned out to be the best in the all-around, vault and on her crown bars.

At the same time, as Angelina noted, now she motivates herself to train by being an example for the younger generation.

“I have competed throughout my career, to be honest.

Now I go out to do gymnastics with love - for myself, for the coach, for the audience.

Here I compete only with myself.

I have a certain responsibility.

The younger generation is looking at me, and I have to show decent gymnastics, ”Sport24 quotes Angelina.

Officially, she is still on the youth team, but she is already training with the main team and getting used to the new environment.

The gymnast managed to push the girls to the second and third place on the balance beam, winning gold, and also wedged into the fight of the Olympic champions on the uneven bars.

For the junior, these awards were the first at the adult level.

The Olympic champion Vladislava Urazova did not perform well at the tournament.

She won only two bronze medals - in the all-around and in floor exercises.

However, as the head coach of the Russian national team Valentina Rodionenko explained, she was in a difficult psychological state.

“Urazova buried her dad two weeks ago… We supported her, but you understand, the death of her father, a young man… This is life,” the specialist said.

In general, according to the coach, despite the lack of international competitions, the girls find the strength to prepare and learn new elements.

“There is some progress in the all-around, many young girls showed good programs.

Despite the fact that we are not in a very good position, we are deprived of international starts, they train normally, they try, they want to.

Competitions have shown that there are still few starts, but many mistakes.

Someone has simplified the program, thrown out those elements that we would not like to exclude.

Not everything worked out even for the winners.

Listunova made a mistake on the beam.

There is something to work on, ”the specialist added.

Unfortunately, the girls were not without injuries at the Spartakiad either.

Maria Minaeva could not complete the all-around.

She suspected an Achilles tear.

Sports 2022-10-02T07:30:39.986Z
Listunova's triumph, Melnikova's motivation and Nagorny's perseverance: the Spartakiad of the strongest ended with a gymnast tournament
Sports 2022-07-24T21:16:20.488Z
In the shadow of Kramarenko: the Averina sisters were left without personal victories at the tournament in Belarus
Sports 2022-08-19T06:29:37.466Z
“Everything is going according to plan”: how Lasitskene and Lysenko won the athletics tournament in Moscow
ADS
Sports 2022-08-28T17:20:40.757Z
Egoryan's triumph, Rylov's false start, Stoyanovskiy and Leshukov's dominance: how the Spartakiad of the strongest is held in Russia
Sports 2022-09-29T08:30:26.840Z
Nemov on mobilization: certain reservations should be for current and former members of the national team
Sports 2022-07-26T11:59:39.674Z
“We will still fight for records”: Russian swimmers at the tournament in Kazan showed results at the level of World Cup winners
Sports 2022-11-03T21:47:37.606Z
Gymnastics World Championships: Historic victory for Rebeca Andrade
Sports 2022-09-06T18:41:42.836Z
The Olympics in Paris, alternative tournaments and the protection of the rights of Russians: what sports topics were covered on the fields of the EEF
Sports 2022-07-10T18:41:24.818Z
The triumph of Melnikova and Nagorny and the feat of Listunova: what made the Russian Cup in Artistic Gymnastics memorable