“Thanks to the judge for not removing”: how the Orenburg striker proposed to his girlfriend during the RPL match

Orenburg footballer Vladimir Sychevoi made an offer to his girlfriend right during the match of the 11th round of the RPL with Sochi. Having converted a penalty at the end of the first half, he ran up to the fence, handed his beloved a bouquet of flowers and, dropping to one knee, handed her a box with a ring. After the final whistle, the striker said that he had decided to act a few days ago and did not inform any of his partners about it. He also thanked referee Artyom Lyubimov for not showing him a yellow card, which would have been his second in the match. 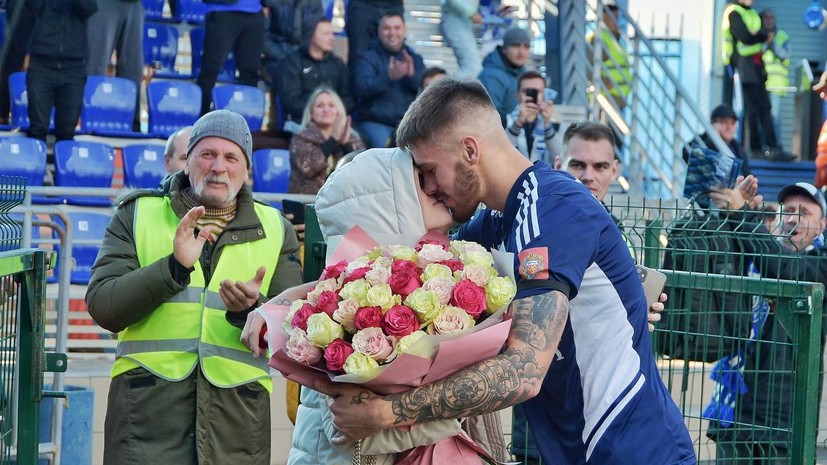 The 11th round of the RPL opened with a match with a not very loud sign - Orenburg hosted Sochi.

However, the meeting exceeded all expectations.

There was a place in it for five goals, two penalties and a red card.

But much more than football I remember the unexpected act of Vladimir Sychev.

At the end of the first half, the attacking hosts earned a penalty kick and converted it himself.

The athlete did not manage with the usual celebration and prepared a whole performance.

He ran to the edge of the fence, picked up a huge bouquet of white and pink flowers and handed it to his surprised girlfriend, who was watching the confrontation from the podium.

Then came the climax of the episode.

The player got down on one knee and handed his beloved a burgundy box with a ring.

She, in a state of pleasant shock, just nodded her head.

After that, the young people merged into a kiss, and the fans gave them a standing ovation.

Surprisingly, at the end of the meeting, it turned out that Sychevoi did not prepare for long to make an offer, and his act was largely spontaneous.

“The idea came to mind three days ago.

I just lay there and thought about our relationship.

Decided it was time to back them up with something.

Nobody on the team knew.

I decided not to tell anyone, because happiness loves silence.

Now everyone congratulated me, ”the Orenburg social networks quote the words of the striker.

According to him, he had two options: to propose after the goal or the final whistle.

“Of course, it was more pleasant to score.

And then they also won.

Got ten out of ten.

I understand that I have attracted a lot of attention to myself and have not even opened the phone yet - I'm afraid, ”added Sychevoi.

Moreover, even the club's management was not aware of the player's ideas.

Sports director Dmitry Andreev assured that he had no idea about anything.

“Yes, we ourselves are in shock!

Can you imagine what creative people play in Orenburg?

Now let's congratulate the players on the victory, and Sychevy separately, on an important event in his life, ”the Sport24 functionary quotes.

In the RPL, the player’s act was reacted with humor and compared with Cristiano Ronaldo’s signature goal celebration, not in favor of the Portuguese.

"Boy: scores and does SIUUUU.

Man: scores and proposes to his girlfriend, ”the post on social networks reads.

And in the Sochi Telegram channel, they were jokingly indignant at the fact that the rivals arranged a registry office right at the stadium.

It is curious that formally the offer to the girl threatened to end for Vladimir with removal.

At that time, he already had a yellow card in his liability, received for stepping on his opponent's foot.

Artyom Lyubimov could get a second "yellow card", but took pity on the player.

According to former judge Igor Fedotov, his colleague had a lot of grounds for issuing a harsh verdict.

“Going out of bounds without the permission of the referee, delaying the game, unsportsmanlike behavior - here you can list for a long time.

According to the scenario, Sychev did not have to show yellow in the first half - then no one would talk about the removal.

But the first card is not discussed at all, everything is clear there, ”the Championship quotes Fedotov.

However, he also drew attention to the ethical side of the issue and, as a negative example, cited the yellow one that Vasily Kazartsev showed to the Spartak striker Alexander Sobolev after a goal in the meeting of the first round of RPL-2020/21 with Sochi.

Then the striker took off his T-shirt, under which he wore a T-shirt with a photo of his recently deceased mother.

“Such situations are discussed at the pre-match meeting, and everyone was aware of Sychev’s plans.

But no one thought that he would have a yellow one.

A beautiful script was clearly developed, but something did not go according to plan.

There was an agreement with the judges, and it is visible: a person realizes a penalty, runs to his brother-friends, claps his hands, goes in the right direction, where his beloved comes, and gives her flowers, ”added Fedotov.

Another ex-referee Alexei Nikolaev believes that there is nothing to punish the striker for, since he did not provoke the audience and did not commit unsportsmanlike acts.

“I suggest that those who believe that it is yellow give a whistle so that they go out onto the lawn and in such a situation show it to the person who, after the goal, did such a kind, original and cool deed.

The referee, I think, didn’t even think about the yellow card at that moment, ”Match TV quotes Nikolaev.

And the head of the Control and Disciplinary Committee of the Russian Football Union (FTC RFU), Artur Grigoryants, promised not to consider the episode involving the Orenburg striker, since it falls exclusively under the jurisdiction of judges.

Finally, Sychevoi himself put an end to the dispute, who honestly admitted: Lyubimov had the right to punish him, but he was sympathetic.

“I am very grateful to him.

I thought I would get a mustard plaster 50/50. Immediately after I made an offer, we talked to the referee.

Told him, "Thank you for not giving me a red card, regardless of how right or wrong it is."

In his place, I would have done the same, ”the football player explained.

By the way, this marriage proposal right on the football field is not the first in the history of the RPL.

In April 2015, Rostov defender Ivan Novoseltsev committed a similar act at that time, turning to the basketball player of the Russian national team and Moscow Dynamo Katerina Keira.

Unlike Sychevy, he held a small ceremony after the match.

Apparently, Novoseltsev was worried that Rostov might stumble in the game with Torpedo, and the result of the meeting would ruin such a significant day for him.

Ivan, surrounded by partners, invited Keir to become his wife.

After the consent of the basketball players, the colleagues congratulated the couple, and the ceremony was crowned by the head coach of the southerners Kurban Berdyev, who embraced Ivan and Katerina like a father.

“Thought it all out quite carefully.

Only a few of the teammates knew about it.

And the people on the podium, whose mission was to bring my bride to the field.

I chose this match specifically because Torpedo is my former club, and Katerina comes from Rostov-on-Don, ”the football player said then.