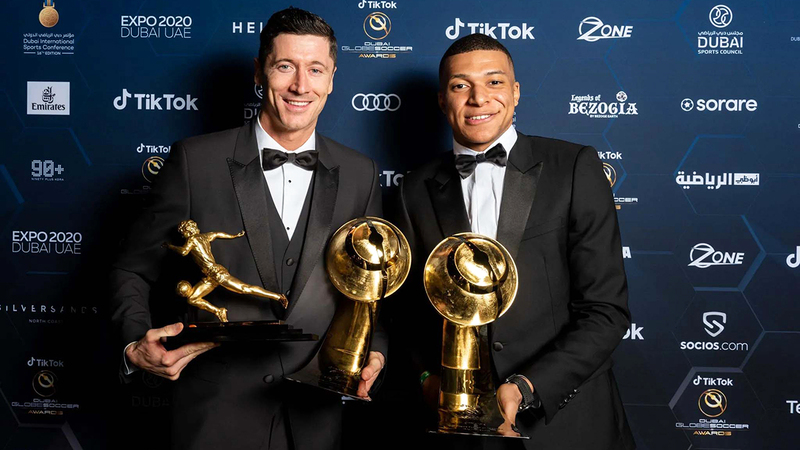 During the honoring of Mbappe and Lewandowski at the last edition of the Dubai International Conference.

The Organizing Committee of the Dubai International Sports Conference decided to hold the 17th edition of the conference and the 13th Dubai Globe Soccer Awards on November 17, three days before the start of the 2022 FIFA World Cup Qatar.

International football stars, including players, coaches and decision makers, will meet with a group of celebrities and guests at Madinat Jumeirah to follow the event, which will be broadcast to viewers in various countries of the world.

The event will include a session on playing plans and how to achieve victories, with the participation of international coaches to be announced later, according to a statement issued by the Dubai Sports Council.

The statement added, "The conference will continue its role as a global platform in the development of football, and shed light on the experiences of the most important players, coaches and club leaders in various fields, in order to identify successful global experiences, and to form a model that suits the Emirates clubs, and constitutes a source of motivation and inspiration for all workers in the field of football." football".

While the Dubai Globe Soccer Award, since its launch in 2010, continues to introduce new categories for honoring awards, reflecting the development of the sports industry and the diversity of its global appeal, in line with this tradition.

The 2022 edition will see the addition of the CNN Off The Pitch Award, which honors the achievement of an individual, a gym or a football organization, that has made a positive impact on the wider community, culture, philanthropy, or a role model for others. The Power Horse Award will be given to the best emerging player, which It will honor the young players who scored outstanding success last season with their incredible performances.

The Dubai Sports Council and MEFIT Pro have announced the organization of the MIFFT Pro Conference and Exhibition for Fitness and Physical Health, which will be held from the 6th to the 8th of next October at the Mövenpick Grand Plaza Hotel in Dubai Media City, with the attendance of more than 1,000 participants, with 30 lecturers speaking. From different countries and continents of the world, they give 60 different lectures.

Ali Omar, Director of Sports Events Department at the Dubai Sports Council, said, "The continuity of this event confirms its success and distinction at all levels, and its success in attracting participants from inside and outside the country, and from various disciplines, which constitutes an addition to the sports sector. During sports, it is not an excess of luxury, but rather a necessary need related to the existence of man in life and his continuity in it.

The conference includes 60 lectures by 30 of the best lecturers in the field of fitness and physical health in the world.

8. CNN Off The Pitch Award

17. The best soccer player in esports.