First match of the year: Utkin's goal in the end helped Russia snatch victory from Kyrgyzstan

The Russian team won a strong-willed victory over the national team of Kyrgyzstan. A friendly match at the Dolon Omurzakov Stadium in Bishkek ended with a score of 2:1. The hosts actively started the meeting and managed to upset Matvey Safonov after a two-moveer in the center, but Alexander Sobolev almost immediately restored the balance by converting a penalty for a foul on Daniil Fomin. And at the end of the second half, Daniil Utkin irresistibly shot into the top corner, taking advantage of a convenient pass from Nikolai Komlichenko. 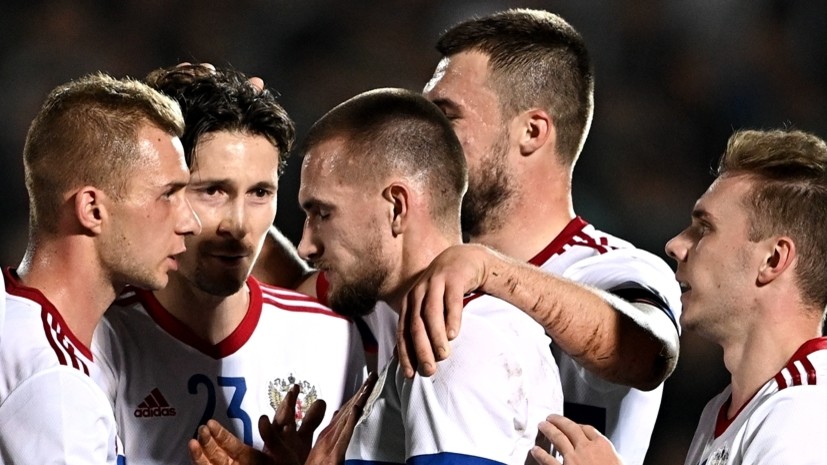 For the Russian team, the match with the Kyrgyz team was a priori an extremely important event.

Due to the difficult situation in the world, Valery Karpin's wards were deprived of the opportunity to take part in official international competitions and only in September got the opportunity to enter the field for the first time.

And although the meeting at the Dolon Omurzakov stadium had the status of a friendly, they expected a confident and dominant performance from the guests.

At least because of the huge difference in the level of teams.

However, after the announcement of the compositions, it became clear that an easy victory might not be.

Karpin initially considered this match as a field for experiments and an opportunity to look at the nearest reserve, and subsequently confirmed his words in practice.

Four debutants got a chance to prove themselves at once - Daniil Krugovoy and Sergey Borodin came out in defense, Alexander Kovalenko was in the middle line, and Roman Yezhov was in attack.

Against their background, even Danil Glebov and Maxim Osipenko looked like old-timers, who began to be actively involved in the national team only after the arrival of a new mentor.

Under such conditions, one had to rely rather not on a well-coordinated game, but on the individual skill of individual performers.

But this evening there were serious problems with that.

In such conditions, much more was expected from more experienced and stellar compatriots - at the core they were more than enough.

But neither Daniil Fomin with Alexander Sobolev, nor Zelimkhan Bakaev with Vyacheslav Karavaev could lead partners.

For the entire first half, the Russians did not organize a single dangerous moment from the game, they only hit the goal four times, and in general they did not control the course of the meeting.

The extremely low pace and the off-scale amount of marriage very often prevented them from crossing the center of the field and provoked not only the disruption of their own attacks, but also raids into the penalty area of ​​Matvey Safonov.

Unlike rivals, the hosts looked active, relaxed and did not hesitate to check the vigilance of the goalkeeper of Krasnodar.

In terms of the number of blows, they almost doubled (7:4) their opponents, which can already be considered a serious achievement.

Only two passes were enough for the wards of Alexander Krestinin to “cut off” half of the opposing team.

"Shot" in the near corner was a logical end to the episode and at the same time a punishment for the loss of concentration.

It was possible to prevent a total failure in the first half thanks to the actions of Bakaev and Fomin.

The first received the ball on the flank and immediately addressed it to a partner who ran into the penalty area, and the defender laid him on the lawn.

The chief arbiter, without a shadow of a doubt, pointed to the point from which Sobolev irresistibly struck.

But it is unlikely that this could completely smooth out the impression of the team's extremely unsuccessful and toothless game.

Before the start of the meeting, Karpin admitted that during the confrontation with Kyrgyzstan, all 22 field players who arrived in Bishkek would get a chance to prove themselves.

And he did not deviate from this plan, even in difficult conditions.

As a result, only Fedor Chalov and Stanislav Magkeev remained on the bench, while ten nominal substitutes appeared right after the break.

And although the guests increased a little in terms of activity, there was no need to talk about cardinal changes.

The way out of the defense was still carried out through a long throw to a powerful center forward, in the role of which, after the break, Nikolai Komlichenko turned out to be, and when trying to pass the center line through a short pass, problems arose.

At the same time, it was striking how passive the Russians looked without the ball and how reluctantly they opened into free zones.

Attempts to take the initiative in their own hands and try to organize an offensive alone can be completely counted on the fingers.

In a couple of episodes, Andrei Mostovoy ventured into this, but did not succeed.

And Maxim Glushenkov did seem to be embarrassed to act in his usual manner, surrounded by experienced compatriots.

Daniil Utkin looked more active than others, not only taking on the functions of a playmaker, but also trying to take part in completing attacks.

In this, he was traditionally helped by his partner in Rostov Komlichenko, with whom they built more than one goal in the RPL.

And although in the traditional form their super-connection did not work (Nikolai could not take advantage of his throw and shot higher from the summer), teammates still managed to save Karpin's team from a fiasco.

In the 89th minute, the striker won the fight near the edge of the penalty area and helped Daler Kuzyaev's pass reach the midfielder, who shot irresistibly into the upper left corner.

The Russian team was still able to defeat the team of Kyrgyzstan, but left not the most pleasant impression of their performance.

And although all this can be justified by the lack of teamwork between partners, a large number of debutants (nine) and a lack of practice, this is unlikely to be a serious excuse for the fans.

Karpin himself partially agreed with this, according to which he still had questions for his wards about the game.