Holy water on the head of the pioneer. Pope Francis consecrates Rien Schuurhuis, a Dutchman who this Sunday will become the first representative of the Vatican in a... 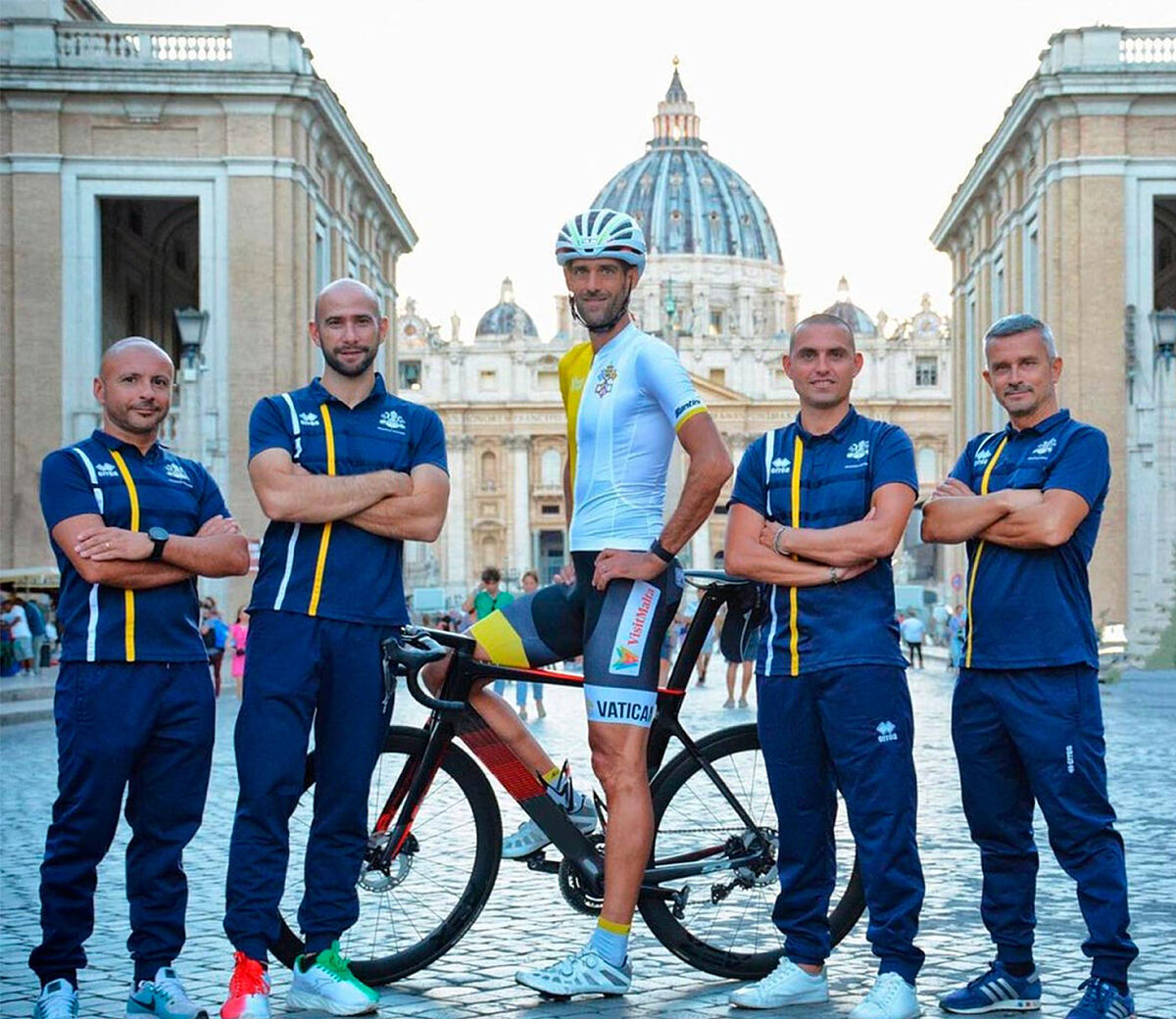 Holy water on the head of the pioneer.

, a Dutchman who this Sunday will become the first Vatican representative in a cycling World Cup.

All honors for the cyclist of God, who is 40 years old and has no relevant track record.

Holiness as a distinctive rank of the road championship in Wollongong (Australia), where the smallest state in the world will leave its mark.

For the first time, a bicycle anointed by the Supreme Pontiff and a white and yellow jersey will be integrated into the squad of the best, where the figures of

The Vatican only has 800 inhabitants, but sportingly it can be represented by citizens of their country, both lay and clergy, and their families.

Rien Schuurhuis, born in Groningen, is married to

the Australian Ambassador to the Holy See

A nod to the organizers of this year's World Cup.

The Cycling Federation (included in the Vatican Athletica, a body recognized by the Italian Olympic Committee) was admitted by the International Cycling Union (UCI) in the fall of 2021 and has a team of 10 riders.

Cycling has always attracted the Holy See, in the 90s it promoted the Amore & Vita team.

Pope Francis likes cycling, not only as a sport but also for the values ​​it conveys.

References to this sport are common in his homilies: «Cycling

highlights virtues such as endurance

, fatigue, altruism and team spirit... The balance of the Church is similar to the balance of a bicycle: it is immobile and it works well when on the go;

if you leave it immobile, it falls.”

Schuurhuis is happy with his role as emissary of the Most High: «Since I arrived in Rome, I was immediately attracted by the community spirit of Athletica Vaticana.

The language of sport is truly universal.

Representing the Vatican in Australia is an incredible honor

This Dutch veteran grew up in an environment in which the bicycle took center stage.

In Groningen he cycled to school

and shops to buy food for his family.

«My first money was spent on a bicycle.

I don't know exactly when the love for cycling as a sport was born, but I think it has always been there in my heart », he said in an interview with the Italpress agency.

In a meeting with 'L'Osservatore' he said that he always admired

: «I used to encourage the Spanish Miguel Indurain.

I really admired his modesty and humility in and out of cycling.

He was an inspiration to many young riders.

The opposite of the vivacious personality of my childhood hero, Mario Cipollini", he explained before starting his trip to Australia.

“We have put in a lot of effort to get to this point and I hope to bring this team spirit to the competition.

Sport has the power to push each of us to give the best of ourselves,

», assured a runner always far from the elite.

Schuurhuis made his professional debut in 2016, on the Australian team Oliver's Real Food.

He has also been a member of the Black Inc Cycling Team of Laos.

his career has been in Asia and Oceania

His best results have been a fifth place in the general classification of the Grand South Coast Tour in 2017, a second place in the Tour of Tahiti in 2018, two stage wins in that same race in 2019 and a third place in the Tour of New Caledonia 2019. Last year he participated in the Dutch Time Trial Championship, finishing in 40th place, more than more minutes behind the winner,

For the Pope's cyclist, finishing Sunday's race (266.9 kilometers, with a broken and very demanding profile) would be a feat.

Schuurhuis will have the technical support of

, a former cyclist for the Liquigas, Astana and Bahrain teams and a domestique of

Sport is a dynamic factor in the house of San Pedro, it maintains a

, made up of volunteers from the Swiss Guard, members of the Papal Council and museum guards.

It also has a

On July 1, he attended an official international competition for the first time: the Mediterranean Games, held in Oran (Algeria).

Sara Carnicelli (27 years old, daughter of a Vatican clerk, participated in the half marathon event.