Mohammed Mohsen, an Emirati champion who excelled in the world of water bikes at the age of 50

The water bike rider, Muhammad Mohsen, confirmed that he aspires to win the world title, to be held in the United States next October, pointing out that the organizing committee classified him as the most prominent candidate for the title. Muhammad Mohsen (53 years), told «Emirates Today»: « If his love for 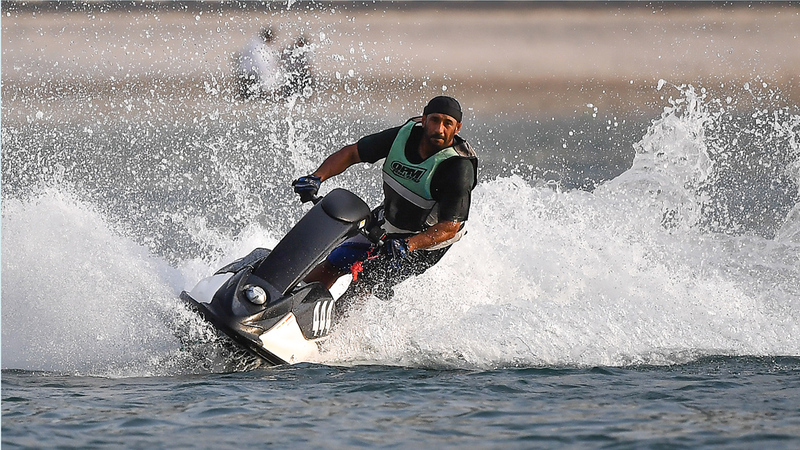 He left Al-Nasr football club due to injury

Mohammed Mohsen, an Emirati champion who excelled in the world of water bikes at the age of 50

The water bike rider, Mohamed Mohsen, confirmed that he aspires to win the world championship, to be held in the United States next October, pointing out that the organizing committee classified him as the most prominent candidate for the title.

Mohamed Mohsen, 53, told "Emirates Today": "His love for water bikes (Jet Ski) did not stop for nearly three decades," explaining: "I have been associated with sports since I was young, and I started playing football and I was a player in a club. Al-Nasr, along with my love for marine sports in the nineties of the last century, but a severe injury forced me to stop playing football, so I moved to professional water cycling since 1994.”

He added: "I am one of the first people to represent the country in foreign participation, after a water bike race was organized in Dubai, with the aim of forming a team representing the Emirates in the Middle East Championship in Lebanon, and I got second place, while the matter developed with me because of my desire to reach the level of professionally, and I traveled to the United States to develop my level.”

He continued: "I participated in many tournaments, most notably the American Championship, which was held in Arizona, and won second place, and also achieved many titles in Hungary, Austria, Britain and Poland, as well as in the Gulf countries (Bahrain, Saudi Arabia and Oman), and local championships in the country. ».

Mohsen talked about his daily program to prepare for the upcoming world championships, and said: "I train daily for two hours in the morning and then go to the gym, because this sport requires great physical strength and high fitness."

He pointed out that the sport of water bikes is financially costly, and that he participates in the tournaments at his own expense, and said: "I spend at least 300 dirhams per day in terms of preparations, oil and special equipment, and it comes to nearly 10,000 dirhams per month, while sometimes the participations have a return. Good money that compensates for what he spent during the preparation and training period.”

As for his departure from football, he said: "I have moved away from playing, but I follow Al-Nasr club and encourage it, and unfortunately (the Brigadier) is like a dollar day above and day under, and I hope to achieve the league title this season, after an absence of more than 30 years."

Mohsen spoke about the most difficult situations he faced, and said: "I had a severe accident in 2015 and lost consciousness and drowned, but the rescue forces pulled me out and I felt myself only while I was in the hospital, but this accident did not affect my desire to continue practicing my beloved sport to my heart." .

It is noteworthy that Mohsen achieved his most prominent achievements by winning second place in the “Gales Expert” competitions in the Veteran category, within the World Championship held in America, as he scored 151 points, 12 points ahead of the American champion, Snider Troy, as this championship is within the World Championship ( The Triple Crown), which enjoys great international attention appeared, through the nobility of the tournament and the great participations from different continents of the world.

He spends of his own money on sports, about 10 thousand dirhams per month, and bets on the return of the tournaments to make up for his expenses.

Among the most prominent achievements of Mohamed Mohsen is his second place in the "Gales Expert", in the category of veterans in the World Championships.