Akhmetov's masterpiece, Alexandrov's double and Dynamo's defeat in Rostov-on-Don: what do you remember about the matches of the Russian Cup

Adolfo Gaich's first goal in a year and a half helped CSKA take over Torpedo, and Ilzat Akhmetov's masterpiece pass brought Krasnodar a victory over Khimki. Rostov inflicted the first defeat of the season on Dynamo, and Lokomotiv failed to defeat Pari NN for the second time in a row, this time losing on the road. The heroes of the meetings were Yegor Golenkov and Nikita Alexandrov, who scored twice. Sochi, in the absence of Christian Noboa, lost on the road to Ural, and Akhmat confidently defeated Orenburg at home. What do you remember about the matches of the first round of the group stage of the Russian Cup - in the material RT. 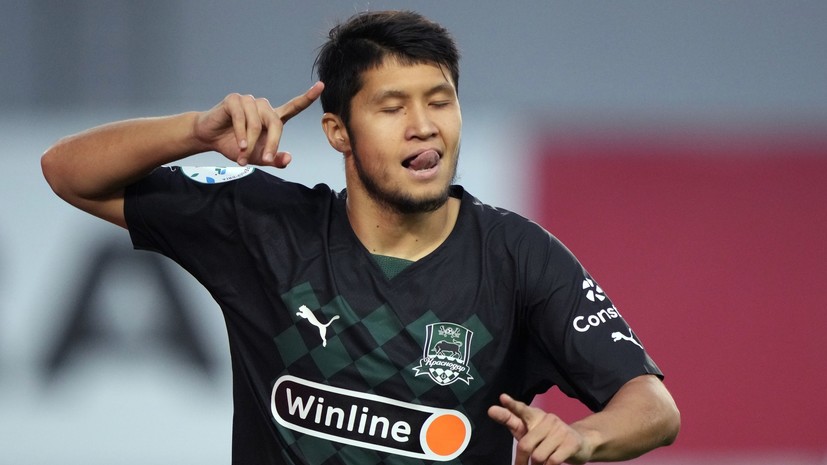 Almost all the top clubs, on the eve of the eighth round of the RPL, preferred to keep the leaders in the matches of the Russian Cup.

CSKA was no exception.

However, the players who replaced them did their best.

First of all, this concerns Adolfo Gaich, who had a good ending of the meeting with Rostov and almost brought the team victory.

After that, the coach released the Argentine from the first minutes, and he repaid the confidence by participating in both goals.

At the 14th minute, Oleksandr Dovbnya unsuccessfully parried his blow directly at 19-year-old Nikita Ermakov, who had no difficulty sending a projectile at a target from close range.

For the midfielder, this ball was the debut in adult football.

And after the break, the striker scored on his own, running away from the defenders and taking advantage of an excellent transfer from Matvey Lukin from his own half.

Finally, having hit someone else's goal, Gaich did not hide his happiness, because he had not scored in any tournament since March 2021.

And in the composition of CSKA, he did not differ at all for almost two years.

Also in the composition of the army team, the young goalkeeper Vladislav Torop should be singled out.

Akinfeev's replacement made seven saves and had a "dry" match for the third time in his career.

The confrontation between Khimki and Krasnodar ended with a similar score.

However, the team near Moscow broke the whole game in the middle of the first half.

Zakhar Volkov knocked down an opponent who was running away to the opponent's goal, and referee Anton Frolov, after watching the replay, showed the violator a direct red card for a foul of the last hope.

The standard draw ended with the first goal for the team by 21-year-old graduate of the club academy Vyacheslav Litvinov.

And shortly before the break, a rookie Ilzat Akhmetov scored a stunning goal.

In the penalty area, the midfielder “on a handkerchief” on dribbling left three opponents and carefully threw a projectile into the far nine past Vitaly Gudiev.

Khimki team did not manage to upset Stanislav Agkatsev.

So far, it remains to state that the resignation of Sergei Yuran did not justify itself.

Under the leadership of Nikolai Pisarev, the red-blacks suffered four defeats in a row with a total score of 2:12.

According to media reports, in the near future he risks leaving the post.

In the evening, Roman Teryushkov, a member of the club's supervisory board, confirmed the information.

However, there were enough unexpected results in the first round.

For example, Sochi, which is in fifth place in the RPL table, sensationally lost on the road to the outsider Ural, who scored only one point.

The southerners were considered the clear favorites of the meeting, but failed it.

Yekaterinburgers, in the pouring rain, took advantage of their moments.

Already in the eighth minute, Alexander Yushin realized a one-on-one exit after an amazing casting from his partner from his own half of the field.

Moreover, in this episode, an injured defender of the guests was lying on the lawn, but the referee did not record a foul.

And after an hour of the meeting, Igor Yurganov involuntarily helped the opponent, cutting the ball into his own net in an attempt to interrupt the opponent's cross.

True, shortly before this, the referee canceled the goal of Ramazan Gadzhimuradov due to an offside position.

In turn, the wards of Vadim Garanin practically did not threaten the gates of others.

They possessed the ball 44% of the time and had only four shots on target without causing problems for Nikita Alekseev.

Ural, on the other hand, not only took the lead in Group D along with CSKA, but also won their first victory since May.

But the victory of Pari NN over Lokomotiv was less surprising to some extent.

Last season, Nizhny Novgorod proved to be a "thunderstorm of authorities", and the change of head coach did not affect their character.

At the start of the current national championship draw, the team of Mikhail Galaktionov managed to take points from Dynamo and CSKA.

And he started his away draw just with the railroad.

Muscovites were eager to take revenge and at the same time extend their own winning streak.

However, luck was not on their side this evening.

If the hosts squeezed the maximum out of the available chances, then the guests experienced serious problems with the implementation.

One Ivan Ignatiev missed a couple of absolute moments.

And the young central defender Viktor Alexandrov unexpectedly became the main character in their composition.

Before that, at the adult level, he had never scored, but in the match with Loko he scored a double.

In the first case, he finished off the ball into the net from close range, and in the second he outplayed Stanislav Magkeev on the “second floor”.

On top of all the troubles, the red-greens were left without the injured Marinato Guilherme in the first half.

Andrey Savin took the field instead.

The debut of the Albanian Mario Mitai in the center of defense was also blurred.

And in the central match of the game day, Rostov and Dynamo met.

However, their confrontation did not turn out to be fully complete, since both coaches decided to save the leaders and threw a large number of reservists into battle.

It hit the Muscovites harder, because from the first minutes a lot of unfinished youth entered the field: Alexander Kutitsky, Denis Osokin, Georgy Sulakvelidze, Yaroslav Gladyshev.

And 19-year-old Arsen Zakharyan received the captain's armband at all.

As a result, the noticeably updated composition of the blue and white did not manage to oppose anything to the more experienced wards of Valery Karpin.

First of all, it concerned the game in defense.

The young Osokin also made blots.

It was his violation of the rules in the penalty area that led to the appointment of a penalty.

And shortly before the break, the hosts again converted a standard position into a goal.

After filing from the flank, the same Golenkov upset Igor Leshchuk for the second time.

Already in the course of the second half of the meeting, Slavish Jokanovich released Sabu Sazonov, Daniil Fomin, Konstantin Tyukavin and Luka Gagnidze, but this did not help turn the tide of confrontation.

The Southerners confidently acted on the defensive, and in several situations, partners were rescued by Nikita Medvedev.

Thus, Rostov once again proved to be an extremely uncomfortable opponent for Dynamo, especially at home.

In the last seven matches in Rostov-on-Don, the blue-and-whites suffered five defeats with one draw and the same number of defeats.

It seemed that the wards of Marcel Lichka were able to take points from Grozny, but they had an extremely unsuccessful match.

In fact, all questions about the outcome of the confrontation were removed already in the middle of the first half, when the hosts scored two goals one after the other.

First, someone else's goal was struck by Kirill Volmer, and then by a local pupil Lechi Sadulaev.

It is noteworthy that he managed to distinguish himself from the transfer of the old-timer and team captain Rizvan Utsiev.

And immediately after the break, Vladimir Ilyin brought the score to a large one.

For Orenburg, the only reason for joy was the goal of prestige by Vladimir Sychev.

The guests' Joker appeared on the field only in the 74th minute, but managed to score again.

In general, the striker, who played in the Crimean championship a few years ago, is having a good season, because he has five goals in six matches in the RPL and the National Cup.