“This is the decision of her parents”: 15-year-old figure skater Shiryaeva agreed to transfer to the Canadian team

Russian figure skater Uliana Shiryaeva should soon change her sports citizenship and start playing for the Canadian national team. Skate Canada said it had sent a request to the Russian Figure Skating Federation and expected to receive a response in December. In turn, the FFKKR said that the athlete's family decided to move because of her father's work. According to three-time Olympic champion Irina Rodnina, changing sports citizenship is a normal practice for figure skaters, and ex-world champion Maria Butyrskaya did not rule out that Shiryaeva took such a step in order to be able to participate in international tournaments. 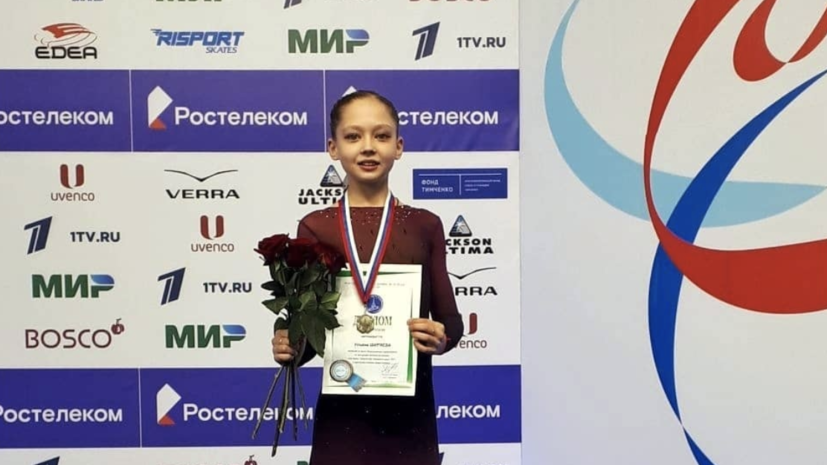 The Canadian Figure Skating Federation confirmed that the girl is in the process of paperwork.

It is noted that the point in this matter should be put no earlier than December.

“Skate Canada has submitted a request and Russia will review it in December.

During this transitional period, until a final decision is made ... her Moscow club allowed her to participate in non-qualifying starts, ”BIV.com quotes the words of the executive director of Skate Canada in British Columbia, Ted Barton.

The organization said that the 15-year-old figure skater moved to Canada at the beginning of the year and is now waiting for her situation to be resolved.

This will not prevent her from taking part in the tournament, which takes place this weekend in the suburbs of Vancouver.

One of the functionaries of Skate Canada, Mike Slipchuk, noted that although the Russians were forbidden to compete in international competitions, Ulyana was allowed to apply for regional starts, since the girl was in the process of changing sports citizenship.

The Army of Figure Skating club, which Shiryaeva represented before leaving for Canada, also gave her permission to do so.

The Russian Figure Skating Federation confirmed that they would make a final verdict on the athlete, according to the prescribed procedures, at the executive committee of the organization in December.

“Moving to Canada is due to the fact that dad was offered a new job there, and they went with the whole family,” the FFKKR press service explained to TASS.

The general director of the federation, Alexander Kogan, not only calmly reacted to the decision of the young figure skater, but also asked the question: had any of the non-specialists heard about her before?

At the same time, the functionary promised that all procedures for changing sports citizenship would be strictly observed.

At first glance, Shiryaeva's decision to compete under the flag of Canada will not be a big loss for Russian figure skating.

The girl showed very modest results and was not considered one of the most talented in her age.

The biggest achievement for her was the third place at the stage of the Russian Cup among juniors in Perm in November 2021.

Then she lost only to Victoria Morozova and Natalia Lagutova.

But at the January championship of the country among juniors, Ulyana did not even get into the top ten, sitting on the 11th line.

At the junior CHR-2021 among seniors, she was sixth.

She demonstrated a similar performance at the Moscow-2021 championship among juniors.

Nevertheless, according to the former coach of the athlete Alexei Vasilevsky, Shiryaeva is in excellent shape and has a good selection of jumps: a triple axel and a quadruple salchow and sheepskin coat, which are “90% ready”.

“Ulyana left with her parents a few months ago, before leaving, they processed the documents.

On the eve of her departure to Canada, she only spent three months in Moldova ... They periodically get in touch and moved to Canada in connection with the work of their father, they did not have much choice.

They have already submitted documents for the transition to the federation, these are the rules, ”the specialist emphasized.

Renat Laishev, president of the Sambo-70 Sports and Education Center, where many leading domestic figure skaters grew up, spoke out on the topic of Shiryaeva's departure: Anna Shcherbakova, Alina Zagitova, Alexandra Trusova and others.

He advised the 15-year-old girl not to rush.

“As a person who is older, and as a citizen of Russia, I want to turn to her and her parents so that she thinks again.

15 years is already a mature age when a person is aware of everything.

And I would not take rash steps so as not to spoil my life.

The level of sports professionalism has not yet been proven within their country.

There is something to strive for, ”quotes a Metaratings specialist.

At the same time, Shiryaeva was not the first young Russian figure skater who decided to change sports citizenship in August.

The athlete who trains with Lyudmila Gafarova in Kazan will continue to represent the Georgian national team.

She is declared for the third stage of the Grand Prix among juniors, which will be held in Riga in September.

“I could leave, afraid of high competition”

According to experts, there is nothing wrong with such transitions.

So, three-time Olympic champion Irina Rodnina doubted that Shiryaeva would be able to help the Russian national team in the future.

“I don’t follow the junior competitions so closely, but leaving for Canada is primarily the decision of her parents.

At the age of 15, Shiryaeva hardly took such a step on her own.

Even if she is a capable girl, Ulyana still has to grow into a star.

Even if, according to her coach, the skater is almost ready to jump two quadruples and has a good triple axel, the question is: will she retain this set by the age of 17, when she can start performing at an adult level?

- Rodnina noted in an interview with RT.

She also recalled that changing sports citizenship is a normal practice for figure skaters, and cited Marina Anisina, who achieved success under the flag of France, and Alena Savchenko, who won the gold medal at the Olympic Games in Pyeongchang for Germany, as an example.

“Shiryaeva is not the first and not the last, and the point here is not to remove Russia from international competitions.

It’s hard for me to say if Ulyana went to Canada in order to be able to perform, but talking about the flight is not entirely true.

In fact, we are talking about a child who does not have the right to sign any document.

There is no need to arrange a tragedy out of the blue, ”added Rodnina.

But the former world champion Maria Butyrskaya, on the contrary, suggested that a girl with such a set of jumps in the future could get into the Russian national team, and explained why moving to Canada is dangerous for her.

“Of course, she could leave, afraid of the high competition in the country.

However, it is in such a struggle that one can truly progress.

I remember the Russians who play for other national teams.

There they are deprived of this opportunity.

Everything is chic with them: they do not know their equals at the national level and regularly go to major competitions.

But at the same time they are getting weaker.

She did not rule out that Ulyana took such a step in order to get the opportunity to take part in international tournaments.

“Unfortunately, some athletes in such a situation will be sent to other countries.

People are looking for ways to get out of the difficult situation in which domestic figure skating has found itself.

Change of citizenship is one of the options.

Together with a new passport, you get new opportunities, ”added Butyrskaya.

But the famous coach Tatyana Tarasova, like Rodnina, did not see anything wrong with this.

“Moreover, in the current conditions, there is no need to discuss this, she moved on and moved on.

I personally am not offended that our young athletes are changing the national team.

Yes, they are leaving us, but this is a good page in their life and career, ”the RBC specialist quotes.