The revival of the gladiator: how Promes leads Spartak and fights for the title of the best legionnaire in the history of the RPL

Quincy Promes became one of the brightest players in the first five rounds of the Russian Championship. The Spartak striker scored six goals and two assists, giving the best segment at the start of the season in his sports career. And if he does not slow down, then during this tournament draw he can become the most productive foreigner in the history of the RPL. At the same time, some time ago, the transfer of the Dutchman was called an unsuccessful decision, and he himself was called a pale shadow of his former self. 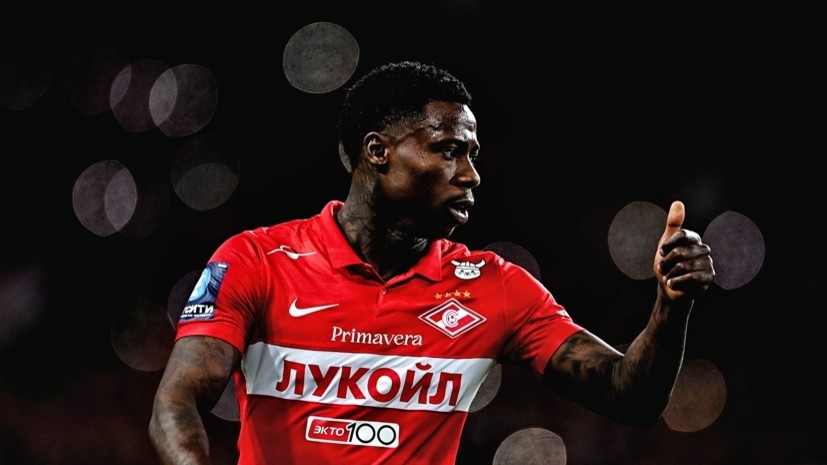 The start of the new RPL season turned out to be rich in events and was remembered not only by the unexpected misfires of Zenit, the sensational failure of Lokomotiv and cardinal changes in the style of Dynamo, but also by a number of bright individual performances.

Daniil Utkin flourished in Rostov, Jorge Carrascal led CSKA, and Matvey Safonov made an application for the title of the strongest goalkeeper in Russia.

Against the general background, Quincy Promes stands out, demonstrating perhaps the best football in the last five years.

It was his amazing game and performance that helped Spartak to take the lead in many ways and made them talk about him now as a contender for the title of top scorer of the championship.

And this despite the fact that a year and a half ago, many were skeptical about his return to Moscow.

At the beginning of last year, Promes was at one of the low points of his career.

His arrival at Ajax turned out, although not a failure, but not as bright as expected from him.

The transfer from Sevilla in the summer of 2019 cost the Amsterdammers €18 million, making him one of the two most expensive players in the history of the club.

At that time, the same amount was spent only on the acquisition of Daley Blind from Manchester United.

The experienced Quincy was expected to form a powerful trio with Dusan Tadic and Hakim Ziyech.

And although he still “shot” 21 (16 + 5) points according to the “goal + pass” system, he failed to help the team achieve serious success.

Although she became nominally the first in the season interrupted due to the pandemic, she could not overcome the group stage barrier in the Champions League.

Despite the fact that the opponents, with the exception of Chelsea, were passable - Valencia and Lille.

The following year, Promes generally dropped out of the base.

David Neres and Anthony looked more impressive on the flanks, Dusan Tadic did not give up either, and Sebastian Aller, bought from West Ham, took the position of the center forward.

As a result, the midfielder played a total of 25 matches, but only 13 came out at the start, scoring six goals and one assist.

And in December, a story flared up with an attack on a relative, as a result of which Quincy almost ended up in jail.

Against the backdrop of all this, Promes returned to Spartak.

Many seriously believed that Quincy was going to Russia to finish the game and no longer set high goals for himself.

And at first the Dutchman himself willingly gave a reason to think in this vein.

In 11 matches for Spartak in the 2020/21 season, he only scored three times himself and assisted partners the same number of times.

At first, he looked unprepared, and over time, there was no ease in the actions of the once explosive and super-technical player.

Domenico Tedesco also decided to use him as a central attacking midfielder, which clearly did not go in favor of the Dutchman.

In the absence of free space, Promes could not demonstrate his strengths and resembled a pale shadow of himself in his best years.

Doubts about the transfer only strengthened during the next championship.

After the arrival of Rui Vitoria, the Dutchman returned to the left flank of the attack, but he still looked unconvincing, and gradually injuries were added to the game problems.

The transformation did not happen even after the appearance of Paolo Vanoli on the coaching bridge, who continued to move Promes from one position to another.

The Italian tried it in place of a central attacking midfielder, a drawn-out striker and only occasionally released it on the left.

As a result, another statistically disastrous year, the bright spot in which was only a double against Napoli and six (4 + 2) points in three meetings of the Russian Cup.

True, five of them were recruited in confrontations with the "Kuban" and "Yenisei", which partially offsets this achievement.

But the winning goal in the final against Dynamo should not be forgotten.

As a result, Promes approached this season in the status of a dark horse.

He remained one of the most honored legionnaires of the RPL, but his last performances did not allow him to count on a full return to the role of leader and main star of Spartak.

The signing of a contract with young coach Guillermo Abascal helped.

He not only recreated the conditions in the team that maximized the best qualities of the ward, but also endowed him with new powers.

Promes nominally took the position of the left forward in the top three, but began to operate not as an orthodox winger, relying solely on shifting at speed from the flank to the center.

With Abascal, he became a full-fledged red-and-white playmaker, participating in all phases of the team's attack.

Quincy goes deep and helps to connect the lines, pushes the ball forward and often finds himself in the opponent's penalty area.

In terms of functionality, it resembles Lionel Messi from the time of his performances at Barcelona.

And this is especially symbolic, because the current coach of Spartak is a pupil of the Catalan club, who personally watched the legendary Argentine in the blaugrana.

It is possible that it was his experience that inspired him, delegating the same duties to the Dutchman.

And while Promes is not just coping with a new role, but is being revived in the status of one of the top players in the RPL.

In five rounds, he scored six goals, assisted partners twice and has already repeated his own performance in the past championship.

True, then he needed to spend 22 matches.

So impressively, he did not start the national tournament either in Spartak, or in Ajax with Twente, and even more so in Sevilla, where he was tried as a lateral.

But most importantly, the productivity of Promes is not due to the extremely high implementation or the off-scale number of punched penalties, but to the level of the game.

Yes, he scored a little more than statistically predicted, but not like the same Nikolay Komlichenko, whose difference between expected and actual goals scored is 2.11.

Quincy, however, does not impress with her abilities in the end, but she creates a lot both for herself and for her partners.

In this aspect, neither the Brazilian legionnaires of Zenit, nor Utkin and Carrascal, who deserve to be among the main protagonists of the start of the season, can compare with him.

For example, the Dutchman leads not only in terms of expected goals (xG), but also in dangerous chances created with his direct participation (xGChain).

In terms of expected assists (xA), he is second only to two current teammates and one former – Alexander Sobolev, Roman Zobnin and Alexander Lomovitsky.

And this once again speaks of his value to the team - he is the cornerstone in the constructions of Abascal and the main creator of red and white.

And the achievements of Promes cannot be explained by the level of rivals, because in the first five rounds Spartak met mainly with pretty good clubs.

In the first round, he was opposed by Akhmat, which is especially dangerous on the home arena, in the second - by the still dangerous Krasnodar, and in the fifth - by the silver medalist of the past season, Sochi.

Yes, for a number of reasons, at least one of them cannot yet be called a contender for awards, but one should not consider passing matches with these teams either.

Of course, it is too early to draw far-reaching conclusions based on five meetings and crown Promes in advance, but so far it is he who looks like the brightest player at the start of the championship.

An important test will be the derby with Dynamo in the sixth round, during which Quincy may find himself in extremely uncomfortable conditions.

Under Slavis Jokanovic, the blue and whites act in a low block and try to deprive the opponent of space and chances for quick counterattacks to the maximum.

Therefore, it may not be so easy for the Spartak winger to prove himself, however, if he succeeds, he will not only confirm the hopes placed on him, but will also take another step towards the title of the best foreign goalscorer in the history of Russian football.

Now he has 74 accurate hits, only Wagner Love and Serdar Azmun have more (both 85 each).