Rostov's goals from standards, Lokomotiv's struggle for survival and the "swamp" at the bottom of the table: what do you remember about the 5th round of the RPL

Rostov beat Paris Nizhny Novgorod thanks to two goals from set pieces and climbed to third place in the table. Lokomotiv escaped defeat at the end of the match with Krylya Sovetov and remained in the joint zone. In addition to the railway workers, four more teams still do not know victories. And at once in two oppositions zero draws have been fixed. What did the fifth round of the RPL remember - in the material RT. 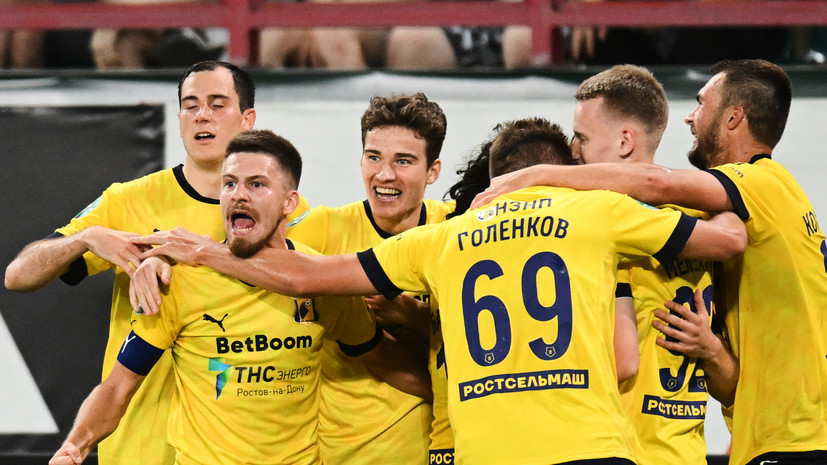 Summer matches of the RPL turned out to be extremely productive.

Football players pleased the fans with beautiful balls in almost every match, and the number of goals only increased (1st round - 24, 2nd - 28, 3rd - 30).

However, in the fourth round, the teams scored only 22 in total, and the first goalless draw was recorded.

In the reporting round, an account was not opened in two confrontations.

The battle of the outsiders Fakel - Ural turned out to be extremely unspectacular.

The first shot on target in Voronezh was delivered only at the end of the first half, and in total the goalkeepers had to enter the game five times.

And if the caution of Yekaterinburg residents can be understood, given the change of coach and “zero” in the points scored, then the passivity of the hosts, who owned the ball less than the opponent, surprised.

The team's mentor Oleg Vasilenko bluntly stated that he focused on defense and was happy with the debut "rusk".

A large number of goals were also expected from the Dynamo-Krasnodar match, but the opponents preferred to keep the "zeros" on the scoreboard than to take risks and open up.

First of all, this concerns the Muscovites, who gave the ball to the southerners and relied on counterattacks.

Under Sandro Schwartz, this was hard to imagine.

In the fall, a further decrease in productivity should be expected.

Firstly, the teams will be forced to think more about the result than about the game.

Secondly, the fields will begin to become unusable, which will affect the quality of football.

Continuation of the fall of Lokomotiv

Meanwhile, Lokomotiv continues to sink to the bottom.

After devastating defeats from Zenit and Krasnodar with a total score of 0:8, the team had a good opportunity to rehabilitate itself in a match with Wings of the Soviets, which also started the season unsuccessfully.

But the railway workers did not take advantage of it and almost lost again.

Although they possessed the ball more often (61%), they could not do anything with the opponent's quick counterattacks.

Guests over and over again easily penetrated through the support zone and created chances.

Only the inspired game of Daniil Khudyakov, who made eight saves, prevented them from distinguishing themselves.

In addition, in the first minutes he parried a penalty from Maxim Glushenkov.

However, in the middle of the second half, he was powerless when the same Glushenkov, opening between Mark Mampassi and Nair Tiknizyan, sent the ball on target from close range.

The hosts did not even use explicit moments.

So, Francois Camano failed to realize the penalty.

It was possible to escape only thanks to the second, rather controversial penalty, which Anton Miranchuk undertook to break through.

But this did not greatly please the few fans who, during the meeting, chanted "Fire the Germans from the club."

The red-greens remained in the zone of transitional matches and, in addition, for the first time since 1996, they failed to win a single victory in the first five rounds of the national championship.

Despite this, the leadership expressed their support for head coach Josef Zinnbauer.

The formation of a "swamp" at the bottom of the standings

In addition to Lokomotiv, four more teams still do not know victories.

Such a number of teams without winnings after five rounds is nonsense.

For comparison, in the previous season there was only one (Ural), and the year before last there were two (Khimki and Rotor).

The current state of affairs threatens to form a "swamp" at the bottom of the standings, because a number of participants do not look the best.

Before the start of the season, Nizhny Novgorod, who finished in 11th place, had a change of coach, which surprised many.

Until she redeemed herself.

Under Alexander Kerzhakov, they didn’t show bright football, but they acted reliably in defense and scored their points.

Under the leadership of Mikhail Galaktionov, Pari NN scores a lot (seven), but also concedes the most along with Torpedo and Lokomotiv - 12. At the same time, the team, as before, has the least possession of the ball (an average of 42.2%) .

"Torpedo" and "Fakel" are not very successful for other reasons.

Both newcomers, having won tickets to the elite division, did not radically change the compositions and are forced to go through a period of difficult adaptation.

And in the Voronezh roster, only some players played in the RPL.

Alexander Borodyuk has much more experienced performers, but they do not show themselves.

For example, ex-defender of the Russian national team Ilya Kutepov received a direct red card at the beginning of the second half of the match with Orenburg.

But the biggest disappointment is Ural, which closes the standings and has already survived the coaching resignation.

In five matches, Yekaterinburg scored only once, but conceded ten.

They also occupy the first line in terms of the number of shots allowed at their own goal (an average of 21.2 per meeting).

If Lokomotiv disappoints fans at the start of the season, Rostov, on the contrary, pleases.

After five rounds, the southerners are in the top three and, along with Zenit and Spartak, do not know defeat.

At the same time, a successful performance is largely paradoxical, since they scored most of the points thanks to the successful drawing of set pieces.

The transition of Daniil Utkin helped to make them his weapon.

Even in Akhmat he became a real master in this component, and in Rostov he confirmed the title.

In matches with Dynamo, Lokomotiv and Khimki, the midfielder performed perfect free throws on the head of Nikolai Komlichenko.

In the confrontation with the railroad, he also distinguished himself on his own, taking advantage of the goalkeeper's grossest mistake in the performance of the corner.

Finally, in a meeting with Pari NN, the pupil of Krasnodar showed his other trump card, scoring with a direct free kick.

In the last RPL draw, he had five such goals.

And only in the 57th minute of the match in Nizhny Novgorod, Dmitry Poloz scored the team's debut goal of the season from the game.

A noteworthy moment: although the yellow-blues occupy the third line in terms of the number of goals (10), they rarely hit on goal (11.4), but they even realize non-obvious moments.

According to Xg (expected goals) they had to score 7.16 times and score no more than eight points.

But the team cannot always be lucky, especially if it continues to rely solely on standards.