Preparation for the Commonwealth Cup, the incident with sticks and the return of Beh: how Russian biathletes spend the offseason

Leading Russian biathletes continue training for the Commonwealth Cup, which starts on August 23. It is planned to participate in the competitions of the team almost in its entirety. Only Kristina Reztsova will not start, who will miss two stages due to an aggravated shoulder injury. Ekaterina Bekh, who returned after being expelled from the national team of Ukraine, will also take part in the tournament. Now she represents the suburbs. And coach Mikhail Shashilov was forced to buy ski poles for the athletes of his group to replace those that broke during the flight to Sochi. How the off-season goes in Russian biathlon - in the material RT. 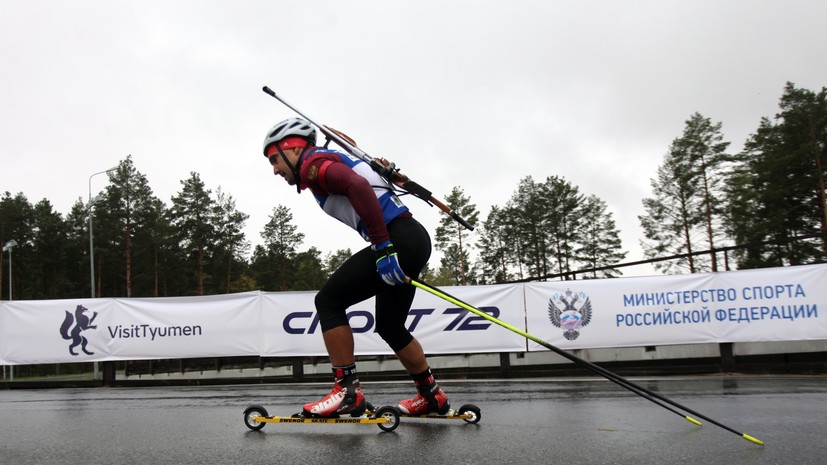 Preparing for the Commonwealth Cup

The Russian biathlon team is actively preparing for the start of the new season.

Already on August 23, the Commonwealth Cup will start in Sochi, in which both Russian and Belarusian athletes will take part.

The first two stages of the tournament will include competitions on roller skates, and from the third, December, athletes will switch to skiing.

Not all leaders will come to the start in Sochi.

So, Kristina Reztsova will miss the summer part of the Cup due to health problems.

For the same reason, the biathlete is absent from the training camp that Artyom Istomin's group is holding these days in Tyumen.

“We discussed her preparation with Christina back in May in Terskol.

At that time, we had a plan that included a high-altitude gathering, and after that a trip to Toksovo and so on.

As a result, she went according to our first plan, but at the same time she completes the work in the same time frame as the main team.

The only thing is that her shoulder injury has worsened, which has been bothering Christina since the winter.

I had to reduce the load and receive treatment, so she misses the training camp, ”said the coach.

Separately from the team, Larisa Kuklina is also engaged.

She, according to Istomin, needs to spend more time in the mountains, so the athlete went to the Seminsky Pass in Altai.

There are no other losses besides Reztsova yet: everyone plans to perform at the starting stage of the Commonwealth Cup.

“All the living will participate,” Kaminsky joked about this.

His ward Eduard Latypov noted that the summer starts will help to check how well the first part of the preparation for the season went.

“See how you feel, compare with the guys.

The group is doing well.

Everyone is interested in how we look at this stage.

Such control starts help to keep in shape.

It is very good that there will be healthy competition.

We need to make sure that we are ready for admission to international competitions, ”Match TV quotes the words of the biathlete.

Among the participants in the competition will be Evgeny Garanichev, who did not qualify for the national team and is preparing together with the biathletes of the Tyumen region.

According to team coach Maxim Kugaevsky, working with an Olympic medalist is a great motivation for young athletes.

“We are glad that Evgeny decided to continue his career and trains with our group.

He is satisfied with the conditions of the training camp and work with other athletes.

For them, he is an example, but it should be so.

It shows how to approach training, what work to do, how to properly perform coaching tasks, ”the specialist emphasized.

In turn, Sergey Bashkirov told how the work on the preparation of the track and the arena at the Laura Olympic Stadium is going.

According to him, it remains for the organizers to put the finishing touches.

“They are doing everything necessary for the competition to be held at the highest level,” the specialist noted.

Spectators will be able to watch biathlon for free.

The only thing is that those who wish will have to pay for a lift to the mountains, but on race days it will have a special price of 333 rubles (usually 1500).

A native of the Khabarovsk Territory, Ekaterina Bekh, who played for Ukraine last season, returned to Russia and will now represent the Moscow region.

She was expelled from the Ukrainian national team in April amid a special operation.

According to the head of the biathlon federation of the Moscow region, Alexei Nuzhdov, he had no reason to refuse Beh when she and her personal coach Nikolai Lopukhov asked to include the biathlete in the regional team.

“She is a famous athlete.

I have known her since childhood.

She started in cross-country skiing, then switched to biathlon.

I ran with my athletes at the championship of the Moscow region, intersected.

She lives in Odintsovo.

That is, in terms of territoriality, it is closest to us.

So it's a combination of factors.

The two-time world champion among juniors plans to perform at the second stage of the Commonwealth Cup in the Belarusian Raubichi, as well as at the Russian summer championship, which will be held in September in Chaikovsky.

An unpleasant incident occurred with the biathletes of the Russian national team from the Shashilov group: equipment was damaged during one of the flights.

Anastasia Shevchenko spoke about this on social networks, posting a photo of damaged ski poles.

The beginning of the training camp in Sochi, where the team arrived, was under threat.

Shashilov had no choice but to buy new equipment for the girls with his own money.

This is the human factor.

I can't say exactly how it happened.

The fact is, they were broken.

But there is nothing to worry about: new sticks have been bought.

Did I buy them on my own.

What should I do?

Wait by the sea for the weather?

What difference does it make who bought it?

The main thing is that the athletes are provided with equipment, ”the Match TV coach quotes.

Ekaterina Yurlova-Perkht has not yet made a final decision about continuing her career.

So, in July, after attending an open training session by Sergei Bashkirov, she said that in order to return to the ski track, she needed to solve health problems.

But the former world champion maintains her form.

In social networks, she regularly talks about her unusual activities.

For example, a biathlete performs jogging with a stroller in which her one-year-old daughter is located.

And the athlete also mastered the sapboard.

“Variety in the training process is one of the important components of performance.

Stand up paddleboarding is a great recovery tool!

And not only in sports!

— wrote Yurlova-Perht in the social network.

In addition, a native of St. Petersburg took part in the amateur cycling race La Strada.

The biathlete overcame a distance of 40 km.

“Great respect to the organizers of the race!

The bike embankments of St. Petersburg are beautiful!”