Dreams of Zagitova about an interview with the president, a meeting between Valieva and Ovechkin: what is being discussed in the world of figure skating

Alina Zagitova admitted that she would like to one day interview Russian President Vladimir Putin, but noted that for this she still needs to gain experience in journalism. Alexander Ovechkin called Kamila Valieva a hero and a completely simple girl. The stars met during the children's hockey tournament Ovi Cup, where the figure skater performed with a demonstration number. Anna Shcherbakova revealed the secrets of the training process of the Eteri Tutberidze group, and Alexandra Stepanova told whether they plan to continue their professional careers with Ivan Bukin. What is discussed in the world of figure skating - in the material RT. 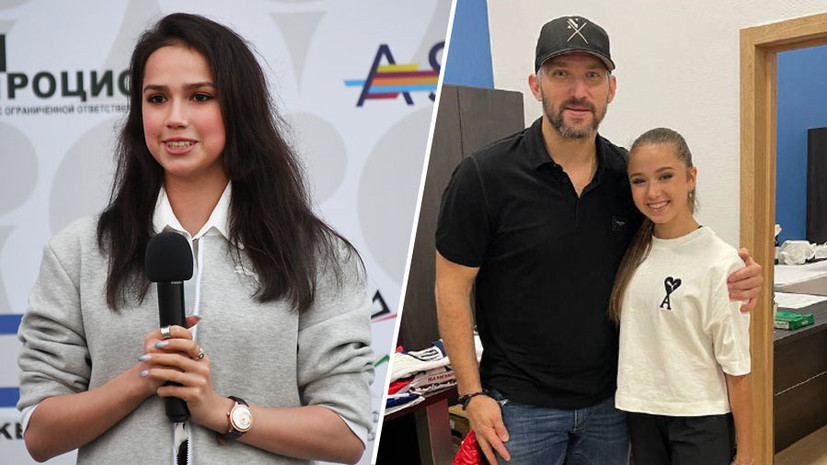 Summer is drawing to a close and the school year is about to begin.

Many figure skaters combine their studies at universities with active training.

So, Evgeny Semenenko is studying at the First St. Petersburg State Medical University, Alexandra Trusova and Anna Shcherbakova entered the correspondence department of the Russian State University of Physical Culture, Sports, Youth and Tourism, and Alina Zagitova is already in her third year at the Faculty of Journalism at the RANEPA.

Recently, the Olympic champion shared how hard it is for her to combine her studies with sports and spoke about her dream in her future profession.

“If you want to study well, then you need to completely immerse yourself in it.

It's the same with sports - in order to achieve results, it must be in the first place.

But now I have a relatively free schedule, I can, for example, if necessary, transfer workouts when they overlap with classes.

When asked who she would like to interview, Zagitova thoughtfully named Russian President Vladimir Putin.

(laughs) But, of course, while I don’t plan to do this, I still don’t have enough experience, ”admitted Alina.

The popular TV presenter Dmitry Guberniev, who has long been offering his future colleague his professional skills lessons, reacted to the skater's statement.

Alina, as a talented girl, can develop further in this sense.

But she needs to understand that in order to be convincing when she interviews, she needs to fully master the skill of a television presenter.

And without me, it will be very difficult for her to do this, ”said the journalist.

Among those who will sit down again this year will be Pyotr Gumennik, who became a student at the Faculty of Software Engineering and Computer Science at ITMO National Research University.

The figure skater graduated from high school two years ago, but decided to get a higher education only now.

“This year I passed the exam in computer science with 100 points.

The bronze medalist of the World Junior Championships expressed the hope that he would be able to study at a university without compromising sports - and vice versa.

“Although I asked those who are already studying there.

They said: to combine study and sports, you need to be either a genius or a cunning one.

I love creating challenges for myself.

Doing only figure skating is boring.

Monotony can even lead to burnout, ”the athlete emphasized.

Kamila Valieva took part in the solemn ceremony preceding the final match of the Ovi Cup children's tournament in Krasnogorsk.

She presented the spectators and participants of the competition with a demonstration program to the music from the film "Avatar".

Also at the event, she talked with Alexander Ovechkin, Vyacheslav Fetisov, Ilya Kovalchuk and many other hockey stars.

“Very cool and very exciting, because so many legends have gathered here.

The forward of "Washington" also shared his impressions of communication with the Beijing Olympic champion in team competitions.

She is a hero, there was such pressure on her ... We root for her with all our hearts, like the whole of Russia, ”said Ovechkin, referring to the doping scandal at the 2022 Games.

The investigation into Valieva’s case is still ongoing, while foreign “well-wishers” keep making sharp comments about the athlete.

So, recently Camila admitted: she is sorry that Russian figure skaters are not allowed to participate in international competitions.

This statement was rather rudely answered by the American Alexa Knierim, who is paired with Brandon Fraser.

“It’s a pity that I still have to wait until I receive my Olympic medal,” the figure skater wrote on the social network.

Anna Shcherbakova lifted the veil of secrecy about how training takes place in the Eteri Tutberidze group.

According to her, in the morning classes, skaters work on gliding, steps and combinations, jumps, and also roll up a short program.

But the evening training takes place in the format of competitions.

“Like in tournaments, there are six minutes of warm-up, during which we run our program.

Then the drawing of lots, just like in competitions, we draw the numbers, worry, worry and run the free program.

The coach writes a listing of elements for everyone, gives a grade for each one in turn, we analyze everything and then work on the mistakes.

And so every day, one day off a week,” shared the Olympic champion, speaking to the participants of the Sirius Educational Center program in Sochi.

The athlete also admitted that, most likely, she would not be able to jump some double jumps now, as she was used to doing triples or quadruples.

According to her, skaters do not count the number of revolutions in the air, because there is simply no time for this: the jump is based on sensations.

“It happens that after you get used to triple jumps, double jumps stop working, you twist them, because out of habit you twist more into the jump and get a little lost in sensations, but this is usually the first time,” Anna noted.

Shcherbakova also said that she does not adhere to any rituals before the competition, but she has a training system developed over the years: how to properly warm up, prepare, tune in to the performance.

“For the past few years, I already had my own tactics, which I adhered to.

I came to the tournament and knew my tasks for every day.

Outside of what we have at the rink, I worked out at the hotel, went to the gym, I knew at what moment I needed to train, at what time to rest.

You just develop your own rhythm, you know how to set up both the body and the head separately.

It's just training and the right mental readiness, ”the figure skater emphasized.

Alexandra Stepanova, who recently received a spectacular marriage proposal right during the ice show in Sochi, told if she and her fiancé are planning a wedding in the near future.

The figure skater's chosen one was Vladislav Malinov, the nephew of coach Svetlana Sokolovskaya.

The exact date was not discussed, but I just really want the whole family and close friends to be around at such an important event.

Therefore, of course, it will take time to gather everyone, and so far we do not have an exact date, ”the athlete shared.

She also admitted that she had not yet thought about the question of whether she would change her surname after marriage.

But Stepanova and her partner on the ice, Ivan Bukin, have certainty about their future careers - the couple plans to perform at least until the 2026 Games.

“Now we are working on our new free program - there are trainings between shows, and in some places we have time to really work on something.

We will ride - one hundred percent.

We do not leave the sport in any case - we really do not want to leave on such a note.

We will work, let's hope that the Olympics will still be ahead of us, and we will perform with dignity at it, ”Sport24 quotes Alexandra.

In turn, the news about the end of the career of Olympic champions in team competitions Victoria Sinitsyna and Nikita Katsalapov caused a huge resonance.

This was announced by their coach Alexander Zhulin, citing age and lack of motivation as the reasons for the decision.

But later this information was denied by the athletes themselves, and the mentor admitted that he was confused.

“Friends, we did not announce our retirement!

My words were torn out of the context of the old interview, they provoked the coach and pulled out a comment from him.

There were no statements,” Katsalapov wrote on Telegram.

She published photos from the Zenit-CSKA football match, signing it with the popular chant of St. Petersburg fans: “Oh, come on!

Also in this post, she congratulated the wards of Sergei Semak on their victory.

Under the picture, there were a lot of comments from army fans, many of which were offensive and very aggressive.

Apparently, the athlete did not expect this at all.

“What a horror ... I thought and thought about how to sign the photo, and came up with it.

Now I’m reading a stream of vile exercises in wit,” wrote Stanislav in the Telegram channel.

According to Konstantinova, her whole family is a fan of the blue-white-blues and she does not imagine that she could support any other team.

I was born in St. Petersburg, I have been living here for 20 years.

Should I come to the match and say that I am rooting for friendship to win?

No!” added the figure skater.

Despite everything, Konstantinova does not refuse to attend football matches and plans to come to Moscow with her father for a meeting with Spartak, which will take place on September 4.