After a successful start: why Yuran left Khimki for the third time

Sergey Yuran left the post of Khimki head coach six months after his appointment. This was announced by a member of the Supervisory Board of the club near Moscow Roman Teryushkov. According to him, the parties did not initially plan long-term cooperation, and the resignation is not related to a possible conflict between the specialist and the team's investor Tufan Sadigov. Why the team changed their mentor after the best start in the RPL in history - in the RT material. 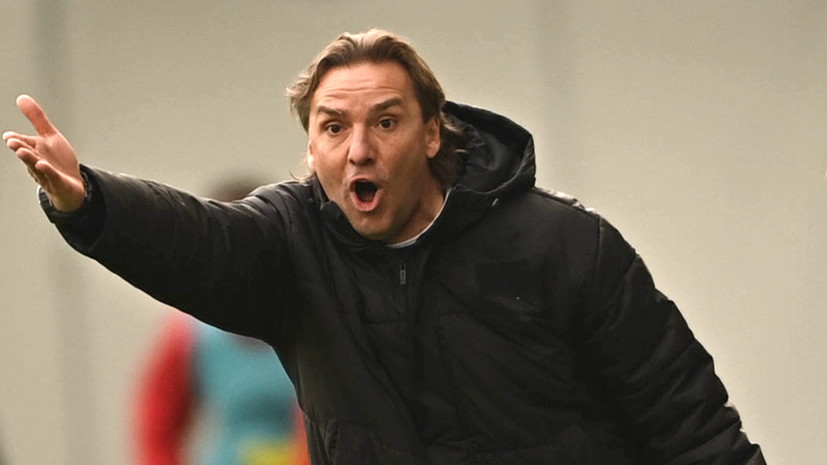 In two days, two coaching resignations took place in the RPL at once.

But if the possible departure of Igor Shalimov from Ural was discussed immediately after the meeting with Spartak, then parting with Sergei Yuran was surprising.

Under his leadership, Khimki looked more than worthy at the start of the season, and after four rounds they were at the top of the standings and showed solid football.

Therefore, many considered that the termination of the contract with a specialist was provoked not by the performance of the team, but by other, hidden reasons.

For the first time, rumors about Yuran's resignation appeared the day before, and confirmation followed a day later.

Roman Teryushkov, a member of the Supervisory Board of the club near Moscow, announced this on the air of the Match TV channel.

According to him, the parties initially did not plan to cooperate for a long time.

“We talked about some kind of short-term interaction: staying in the elite and preparing for the new season.

Now, by mutual agreement, we have come to the conclusion that it is necessary to part.

Documents will be signed in the near future, compensation will be paid, ”Teryushkov said.

However, it is hard to believe in the explanations of a member of the Khimki Supervisory Board.

In football, the pre-season is of great importance, so most functionaries try to appoint a coach before it starts - to give him the opportunity to get to know the athletes, assess their potential, adapt to a specific game model.

Often, even a few lost weeks can have an extremely negative impact on the team's prospects in the championship.

For example, it was precisely for this that CSKA was criticized in the summer, which failed to immediately reach an agreement with Vladimir Fedotov.

And it is difficult to imagine how much more complicated the task is if a specialist takes his post already in the course of the championship.

Let's say that Yuran's tasks really included only maintaining a residence permit in the Premier League and preparing the team for the new championship.

But why didn't the helmsman change happen sooner?

If his departure was planned, then why wait for the fourth round and put his successor in an awkward situation?

After all, he will have to prepare the red-blacks for a difficult confrontation with Akhmat in a short time, and then completely pass the test of Lokomotiv and Sochi.

The former will certainly be eager to be rehabilitated for a failure at the start, the latter are the current RPL silver medalists and look very impressive even after losing a number of leaders.

The decision seems even more strange, because it is almost impossible to seriously criticize Yuran for the results.

In four matches, Khimki scored seven points and ended up at a distance of three from the leading CSKA and Spartak.

In the entire history of performances in the country's top division, they have never started more successfully.

And although the majority was obtained in meetings with equal opponents (“Pari NN” and “Torpedo”), a sensational draw with Zenit is a serious achievement.

It's hard to complain about the game.

The red-blacks are in the top eight both in terms of expected goals scored and goals conceded, and perhaps their most modern style can cause questions.

Wards Juran do not press too actively and rely on smashing counterattacks, but this can be understood.

Not the most stellar selection of performers does not allow them to act as the first number, and the presence of reactive Reziuan Mirzov and Alexander Lomovitsky literally pushes to rely on their strengths.

Thus, it may seem much more logical that the reason for Juran's resignation lay not in sports, but in football moments.

It is not known for certain about them, however, there are rumors in the media about possible difficulties in the relationship between the coach and Teryushkov, as well as a conflict with Khimki investor Tufan Sadygov.

So, the reason for such decisive measures against the mentor could be his unwillingness to put a functionary, Ilya Sadigov, in the composition of the son.

The young striker spent four minutes in the confrontation with Pari NN, after which he first remained on the bench in the match with Rostov, and then did not get into the application for a meeting with Torpedo.

“Is it due to the fact that Juran did not release Sadigov on the field in the match with Rostov?

Not related at all.

We have those who are ready on the field.

The coach accepted the structure.

Ilya played in that championship, in this one too, so it has nothing to do with it.

Also, a member of the Supervisory Board denied the information that Yuran could lose his post due to the situation around the match with Krylya Sovetov.

As noted in the media, the mentor could be involved in a judicial scandal, and his dismissal could help avoid sanctions.

At the moment, there is no confirmation of this information, as well as information about a large penalty that the club will have to pay to its former helmsman.

If you believe the "Championship", for the termination of the agreement Yuran will receive 35-40 million rubles.

At the same time, the replacement of the disgraced specialist is already known.

The team will be led by Valery Karpin's assistant in the Russian national team - Nikolai Pisarev.

“In the next few days we will announce this ... I hope that on a permanent basis and for a long time.

But decisions are made by the club collectively with the board of founders.

It's impossible to guess.

But there should be at least a season, ”Teryushkov announced.

The legendary Yuri Semin called this decision incomprehensible, and the ex-midfielder of Zenit Vladimir Bystrov suggested that it was not the performance of the players that was to blame, but the “undercover games”.

Agreed with him and former teammate Andrei Arshavin.

“Yuran was taken away in a strange way once.

God forbid if this happens a second time, ”said the midfielder.

It is noteworthy that Yuran leaves Khimki for the third time.

If in 2008 his parting with the asset went relatively smoothly, then in 2020 it was not without a scandal.

And then everything happened under similar circumstances.

Under his leadership, the team sensationally reached the final of the Russian Cup and took second place in the FNL, having won a direct ticket to the Premier League.

But a week before the start of the championship, she was left without a coach.

And then the club also assured that the decision to go different ways was mutual, and Sergey had no complaints.

He confirmed this in a recent interview.

“I just didn’t understand how it was possible to do this to me - like a dog was thrown into the trash.

There would be a reason - no questions.

But when such things happen... For the fact that we played in the Cup final and reached the RPL?

I was so angry about this situation that I just could not be silent.

After two years, I still didn’t understand why I was fired then, ”Juran admitted to Sport24.

According to him, they treated him ugly even after it became officially known about his departure.

Yuran came for things, but at first they did not want to let him into the base, arguing this with instructions from the stadium director.

“The door was locked.

I say: "I have personal things there."

They: "We will collect."

Here I naturally got excited: “I collect my personal belongings myself!”

Patience ran out - the guys almost knocked out this door, and then they opened it for us.

I packed my things and left,” Yuran added.

However, this did not prevent the mentor from signing a contract with the red-blacks again two years later, and in a rather difficult situation.

After 18 rounds, Khimki occupied the 16th line in the table and was five points behind the saving, 12th place, but under the leadership of Yuran they changed.

And although they failed to avoid participation in transitional matches, they still retained their residence permit in the RPL.

Despite this, Yuran's third arrival at Khimki was the shortest.

This time he worked at the club for only 5.5 months.

True, this is not much less than his previous two periods of stay in the team.

In both cases, he did not stay there longer than six months.

And frequent personnel changes on the coaching bridge can already be called the hallmark of the club near Moscow.

Over the past five years, eight different mentors managed to work in it, and some of them several times.

And only Igor Cherevchenko managed to hold out for more than a year.

True, only in order to spend four more games in it.

After that, he was fired again and, apparently, still holds a grudge against his former employers.

“I will not return to Khimki if they call me back,” Cherevchenko reacted sharply to the question of his desire to take the vacant seat.

As for the future of Yuran, they are talking about his potential arrival at Ural and Torpedo.

The first is already looking for a replacement for Shalimov, and the second may soon be forced to solve similar problems.

As reported in the press, Muscovites are considering the possibility of the resignation of Alexander Borodyuk, and Sergey is on the short list of his potential successors.

It is noteworthy that in addition to him, Cherevchenko and Viktor Goncharenko also appear in it.