Problems with the squad and the struggle for survival: why Lokomotiv is called the main disappointment of the start of the RPL season

After four rounds of the new season of the RPL, Lokomotiv is in 14th place. The team scored only two points and did not win a single victory. At the same time, she concedes the most along with Fakel (11 goals) and scored only twice from the game. Seriously affected the game of railway personnel difficulties. Central defender Lucas Fasson suffered a severe knee injury, and key defensive midfielder Alexis Beka-Beka moved to Nice. In the attack, Wilson Isidore does not show himself, who only hit the opponents' gates once. 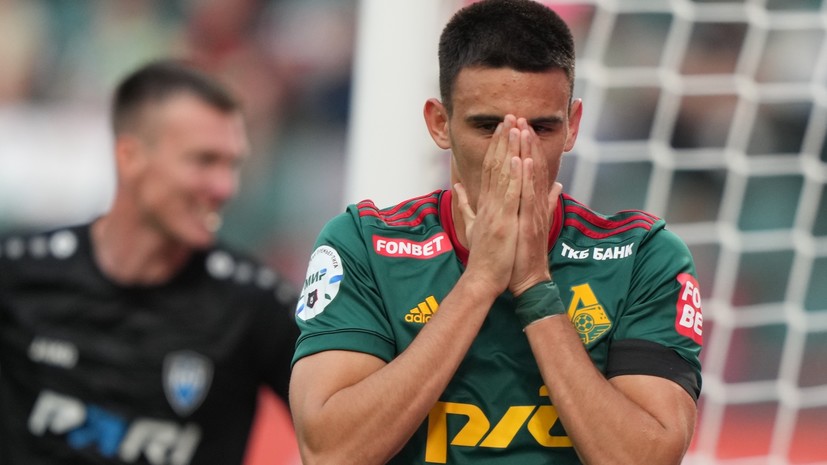 On the eve of the new season, Lokomotiv was seen as perhaps the main rival of Zenit in the fight for the championship and, at least, a clear contender for medals.

Unlike rivals, the club retained almost all legionnaires, with the exception of Jan Kukhta, kept the leaders with a Russian passport and pointwise strengthened the problematic positions with defender Lucas Fasson and forwards Ivan Ignatiev and Marko Rakognac.

However, the railway workers failed the first matches.

After four rounds, they have only two points in their assets and occupy 14th place in the table, located one step away from the relegation zone.

For the team, this is the worst indicator in the national championship in this segment since 2006, when the Muscovites led by Slavoljub Muslin had one point in their assets.

But they have never conceded 11 goals in the first four rounds.

Moreover, according to this indicator, the red-greens share the last line with the newcomer of the elite division Fakel.

The defensive line is a real headache for Marvin Komper and Josef Zinnbauer.

With the appearance of Fasson in the composition of the coaching staff, the duet of the Brazilian and Tina Yedvai played in the center of defense.

In the confrontation with Zenit, the Croat was paired with Stanislav Magkeev, who returned to action after an injury, and in the meeting with Krasnodar, young Mark Mampassi.

In both cases, the outcome was sad.

From St. Petersburg, the railway workers missed five, and from the southerners - three.

To some extent, this number of goals can be called an accident, since the opponents managed to achieve a comfortable advantage in the end, when the Muscovites exposed their rear and went forward.

In the northern capital, they were also let down by Dmitry Barinov, who received a red card.

But by that time, the hosts had already brought the matter to a rout.

In matches with other contenders for awards, the red-greens, having missed, crumbled.

Moreover, if Zenit is currently able to beat any opponent in the RPL, then Krasnodar also did not start the season in the best way and in the first three rounds won only one victory over the hopeless outsider Ural, but broke up with Fakel and lost big to Spartak.

It is curious that the "weak link" in the center of the team's defense is not even Mampassi or Magkeev, but Jedvay, who has experience playing in Serie A and the Bundesliga.

The Croatian is regularly risky thrown out of the defensive line and allows effective blots.

So, in the match with Rostov, it was he who did not keep Nikolai Komlichenko on the set-piece.

In the confrontation with Zenit, the legionnaire did not follow Mateo Cassierra in the episode with the first goal, but in the meeting with Krasnodar he allowed Olakunle Olusuegun to run unhindered to the other's goal from the central circle.

Does not rescue partners and the goalkeeper.

The coaches relied on the young Daniil Khudyakov, but she does not justify herself.

Yes, in the match with Zenit he saved the team several times, but in general he does it infrequently.

According to advanced statistics, in the first three meetings, he reflected only 50% of shots on target.

In the match with Krasnodar, this figure was even more modest - two saves with five accurate shots.

In addition, the goalkeeper managed to make two gross mistakes.

The most memorable one happened in the game with Rostov, when he played unsuccessfully at the exit when submitting a standard and allowed Daniil Utkin to shoot an empty target.

And in the match with Krasnodar, Khudyakov failed to cope with Christian Ramirez's long-range shot at the near one.

Of course, not only the goalkeeper and defenders, but also the defenders should be blamed for the large number of goals conceded.

In this area, the team also has serious problems.

Having sold Alexis Beck-Beck for €12 million to Nice, the club, on the one hand, managed to make good money, but on the other hand, they lost an excellent destroyer with good technique and a high-quality first pass in the person of the Frenchman.

Perhaps, it is precisely this that Lokomotiv lacks in the first phase of building their own attacks, when it is necessary to deliver the ball to the front line.

On top of all the troubles, the legionnaire received an optional red card in the confrontation with Rostov and missed the match with Zenit, which also caused the defeat.

And on the eve of the meeting with Krasnodar, the railroad workers also lost the disqualified Barinov.

As a result, the experimental duet in the support zone was 20-year-old Artyom Karpukas and Magkeev, who has recently become more accustomed to seeing in the center of defense.

But it is difficult to blame them for the defeat, because for most of the fight a couple of Russians were not inferior to their opponents in the center of the field.

And Stanislav does currently rank second in the league in the average number of interceptions (3.3).

It is completely impossible to make a claim to the first, since Lokomotiv did not miss a single time on the field with him.

Finally, the red-greens have great difficulties not only in destruction, but also in creation.

In four matches, they scored three goals and are ahead of only Torpedo (two) and Ural (one) located in the relegation zone.

At the same time, the Muscovites scored twice from the game.

In the game against Rostov, Anton Miranchuk converted a penalty.

Fans were waiting for the continuation of the scoring extravaganza from Wilson Isidore, who hit the opponents' goal seven times in the second part of last season, but so far he managed the ball in the game with the modest Pari NN.

The reason for this regression lies on the surface.

Having replenished the team, the Frenchman scored on emotions even in those situations when it was difficult to do so.

In the new season, he does not shine with implementation, although he strikes an average of 2.5 hits per game.

In the match with the Nizhny Novgorod forward, on the contrary, he missed some great moments.

François Camano and Girano Kerk do not support him either, who still have not scored a single point for performance.

Miranchuk once assisted a partner, but so far he looks like a pale shadow of himself.

Quite indicative in this regard was the replacement during the break of the meeting with Krasnodar, in which the 11th number was absolutely invisible.

Rookie forwards do not show themselves either.

Acquired for € 2.5 million, Rakognac is content with substitute appearances in the endings, and, apparently, is far from ideal form.

Ignatiev got a chance in the confrontation with the former Krasnodar team, but in 82 minutes he landed only one hit and made only 19 touches.

Of course, the team of Rifat Zhemaletdinov is very much missing, who scored nine goals and gave six assists in the previous RPL draw.

In the summer, the midfielder suffered a severe Achilles injury and was out for a long time.

And therefore, the railway workers ahead can only count on standard positions or individual miracle goals, like the one that Konstantin Maradishvili scored in the end of the confrontation with Rostov.