The cycling team continued to present its honorable performances and positive results in the fifth edition of the Islamic Solidarity Games, which is currently being hosted in the Turkish city of Konya, as Yusuf Mirza managed yesterday to win the second gold for the UAE in the session in the track competition in the category of points 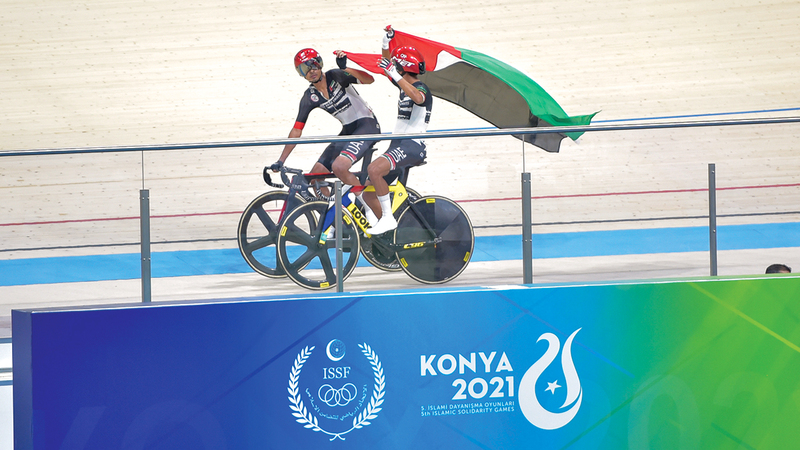 The cycling team continued to present its honorable performances and positive results in the fifth edition of the Islamic Solidarity Games, which is currently hosted by the Turkish city of Konya. Yesterday, the star Yusuf Mirza managed to win the second gold for the UAE in the course in the track competition, the points category, which was held on the Konya Cycling Track with 38 points. Ahmed Al-Mansoori won the bronze medal in the same category with 16 points, while the Iranian Behnam Arian won the second place and the silver medal.

At the end of the third day of the competition, the UAE’s balance rose to three colored medals, two gold and one bronze, all of which came through the cycling team after the gold that Ahmed Al-Mansoori won on the opening day in the Scratch Race, the track category, to enhance the UAE’s position in the general ranking table in second place behind Kazakhstan is the leader with six medals, three gold, one silver and three bronze, while Uzbekistan came third with five medals, one gold, two silver and two bronze.

The race witnessed joint coordination between the understanding duo Yousef Mirza and Ahmed Al-Mansoori, during which the latter made great efforts to preserve the chances of his colleague in grabbing the gold medal in the name of the UAE in the strong competition that was contested most of the periods between the 18 contestants;

Mirza won the first place and climbed with Ahmed Al Mansouri on the podium, which witnessed the crowning of two UAE champions in cycling.

In a press statement, Mirza stressed the importance of setting goals before participating in each entitlement and working to achieve them, noting that the points race in the track category was very strong and witnessed excellent planning by the technical staff of the team. I thank him for his sincere efforts, which resulted in winning the gold and bronze medals in this race, and we are proud of this achievement.”

The coach of the national team, Abdullah Suwaidan, said in a press statement that Ahmed Al-Mansoori played a prominent role in the points race on the track, and continued: “He gave a strong performance that opened the way for Youssef Mirza to shine and win the gold medal.

Today, the weightlifting team arrives in Konya, and includes Sheikh Khaled Montaser Al Qasimi, Ahmed Mustafa in the youth category, and the two players Mai Al Madani and Alia Al Bastaki, in preparation for participating in the tournament on the 11th of this month.

«Olympic» participates in the meeting of the General Assembly

Eng. Azza Bint Suleiman, Assistant Secretary-General for Administrative and Financial Affairs of the National Olympic Committee, participated in the 11th General Assembly of the Islamic Solidarity Sports Federation, which was held yesterday in the Turkish city of Konya, and reviewed many topics on the meeting’s agenda, including the presentation of the Federation’s Board of Directors’ report on The previous period, and presented the report of the Director of the Islamic Solidarity Games in Konya, and presented the proposed amendments to the Statute of the Federation.

The meeting witnessed the signing of the Konya 2022 Capital of the Islamic World Protocol between Prince Abdulaziz bin Turki Al-Faisal and Muhammed Muharram Kasaboglu, the Turkish Minister of Sports.

The UAE raised the medal harvest to 3 in second place in the teams' ranking.