Usman defense, test for Moldavskiy and PFL Grand Prix semi-finals with Russian participation: the most anticipated events of August in MMA

Valentin Moldavsky will take on Steve Mowry and try to reclaim the title of the first contender for the Bellator heavyweight title, while Kamaru Usman will make another defense of the UFC welterweight belt in a rematch with Leon Edwards. Russians Denis Goltsov, Omari Akhmedov and Magomed Umalatov will compete for tickets to the PFL Grand Prix final, and Victoria Dudakova will try to get a contract with the UFC at Dana White's Contender Series. In turn, two fights for the trophy will take place in the ACA, and Azamat Murzakanov will compete for the second time under the auspices of the Absolute Fighting Championship. 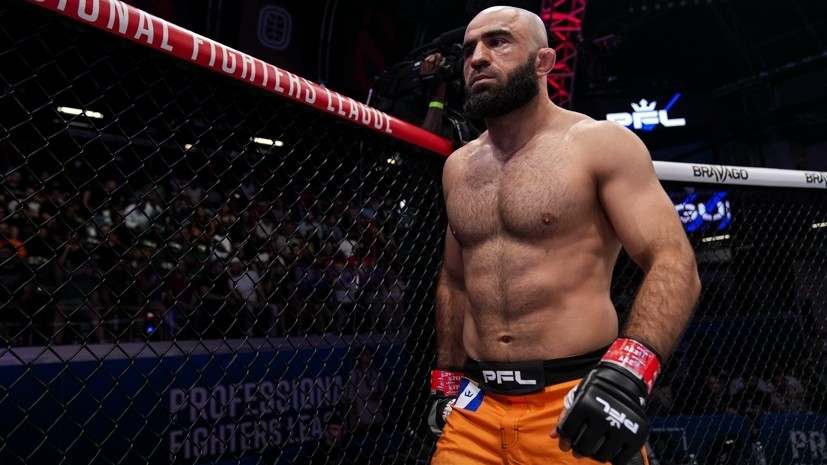 In August, the playoffs of the Professional Fighter League starts, and Omari Akhmedov will compete for a ticket to the final already at the first show.

The Russian light heavyweight will face one of the brightest prospects in this category - American Josh Silveira.

By the age of 29, he managed to win the LFA belt and won nine victories in a row without suffering a single defeat.

Moreover, in the PFL, he won exclusively ahead of schedule, albeit in a battle with not the strongest opponents.

First, he “strangled” Mohamed Juma, and then knocked out Martin Hamlet.

And although Akhmedov is considered an underdog, it is not worth putting an end to his prospects.

In terms of wrestling skills and experience, he is noticeably superior to Silveira, and he is quite a bit inferior in height.

And this is a rather rare case - even during performances in the middle division, Omari never stood out in size.

However, the exchange at an average distance is unlikely to benefit the Russian.

The American has a good arsenal and kicks very dangerously, which was felt by both Hamlet and Ty Cummins - the latter was on the floor already in the 49th second of the battle.

At the same show, Elmar Umarov will make his debut in the PFL.

Like Silveira, the Russian welterweight rose to fame in the LFA, after which he received an invitation from a more status league.

And although he did not have a chance to participate in the current Grand Prix, he can already reserve a place among the participants of the next season.

To do this, you need to deal with the famous grappler Lucas Barbosa.

During his career, he took first place 12 times in prestigious Brazilian jiu-jitsu competitions, and after ten years of inactivity, he decided to try his hand at MMA again, which surprised many.

A week later, a pupil of Fedor Emelianenko will start his second campaign for the title.

In January, he lost to Ryan Bader by a controversial decision and could not bring another Fedor Team belt, and now he is forced to fight again for the title of contender.

And a convincing victory over Steve Mowry may be enough to gain a foothold in the first line of the rating.

The American seems to be an extremely dangerous opponent, which confirms the record of 10-0.

Although most of the opponents were clearly below his level, there were a couple of serious ones.

For the Moldavian battle with Mowry, it can turn out to be extremely difficult.

The American is very strong on the ground, and recently he has also noticeably added to the rack, which was helped by training in the Sanford MMA gym.

He won all his victories ahead of schedule, and the last three opponents could not stand against him for even five minutes.

In striking technique, it will be very difficult for Valentine to oppose something to Steve, so the main question is whether he will be able to dominate him in the fight.

Usually the Russian seeks happiness in the ground and the clinch, but this time his skills and physics may not be enough.

At the second PFL tournament in August, the finalists of the welterweight and heavyweight competitions will be determined, and in this case, the Russians will also not do without.

But if Magomed Umalatov makes his first attempt to get to the decisive fight of the Grand Prix, then Denis Goltsov will try to overcome this barrier from the third time.

Previously, he twice successfully passed the regular season, but suffered setbacks in the playoffs.

In 2019, he was stopped by the future triumphant Ali Isaev, and two years later by Ante Delia.

He will be opposed by another "victim" of the Croatian heavyweight - Matheus Scheiffel.

In 2021, he tried to break into the UFC, but lost to Azamat Murzakanov at the Dana White's Contender Series show, after which he ended up in the PFL through a little-known promotion.

And there he made a sensation by defeating the winner of last year's Grand Prix Bruno Cappelozza.

True, initially this did not help the Brazilian to get around his compatriot in the table and qualify for the playoffs, however, Kappelozza withdrew from the fight with Goltsov, and Scheiffel took his place.

In turn, Magomed Umalatov is waiting for, if not more dangerous, then certainly a more eminent opponent.

In the mid-2010s, Rory McDonald was considered one of the rising stars of the UFC, and at the age of 25 he was already fighting for the welterweight title.

But over the next eight years after his second loss to Robbie Lawler, although he added the Bellator belt to his collection of trophies, he won only five fights out of a dozen, and once declared his unwillingness to hurt his opponents.

And in 2022, the Canadian only vaguely resembles that formidable fighter who was named the heir to Georges St-Pierre.

And this inspires confidence in Umalatov.

Although he does not have the same experience and regalia, in a duel with an unmotivated and lost taste for MMA, MacDonald is able to surprise.

In the stand, the Canadian has not shown anything interesting for a long time and relies solely on a tedious, withering fight.

And if the Russian is able to defend himself from passes to the legs, he will have a good chance of success.

On the same day, the next tournament of the Ultimate Fighting Championship will take place at the Pechanga Arena, which will be crowned by a battle between the stars of the lightest division - Marlon Vera and Dominick Cruz.

And it also arouses interest for the reason that its winner in the near future may become a rival of Peter Yan.

In October, the Russian will face off against Sean O'Malley, but if successful, he may well not get another chance to compete for the title.

Especially if he stays with Algemain Sterling.

And then the matchmakers can either immediately give it to the same Ecuadorian (if he confirms the status of the favorite and deals with the veteran of the promotion), or arrange an eliminator.

Azamat Murzakanov will also fight in San Diego, who will try to take the upper hand in the 12th fight in a row.

The opponent will be Devin Clark, who does not lose hope of breaking into the top 15 light heavyweight.

But for this, he clearly lacks the skills, which is confirmed by his repeated defeats from skilled fighters.

In a duel with a Russian, he will certainly try to use his wrestling skills, but the Russian is unlikely to yield to him in this aspect.

In the stand, the latter looks much more interesting and can send the opponent to the floor ahead of schedule.

A week later, the UFC will hold another numbered tournament, led by a long-awaited rematch between Kamaru Usman and Leon Edwards.

In 2015, the Brit missed six takedowns and lost by unanimous decision, but subsequently won nine out of ten battles and deserved a rematch with the Nigerian.

True, the impressive series did not affect the opinion of the bookmakers at all.

Those still consider the current champion a clear favorite and believe that he will extend the unbeaten streak to a record 16 fights in the UFC.

This can be explained both by the incredible power of Usman and by the fact that on the way to the status of the first number, Edwards dealt with only one representative of the top 4 - Rafael dos Anjos.

This happened in 2019, followed by a failed duel with Belal Muhammad and a tough duel with Nate Diaz.

In the end, the American went ahead and almost laid his opponent on the canvas.

Also, UFC 278 promises to be remembered for a couple more big fights.

As part of one of them, there will be a clash between Paulo Costa and Luke Rockhold.

Middleweight stars will try to break the series of two failures.

The only difference is that the first did not win for three years, and the second for almost five years.

In September 2019, the ex-champion left no chance for David Branch, but then missed the chance to become an interim champion and made a disastrous debut in the light heavyweight category.

And yet another fiasco could well spell the end of the 37-year-old American's career.

Merab Dvalishvili will try to make the next step on the way to the top of the division.

The Georgian athlete is ranked sixth in the bantamweight division, and success against the legendary Jose Aldo can help him break into the top 3.

The only question is what will happen next?

The belt is now held by his friend and teammate Sterling, and a face-to-face meeting seems unlikely.

Two title fights will take place at once in the ACA, which continues to move away from the scandal surrounding the fight between Ali Bagov and Rashid Magomedov.

Surprisingly, the tournament will be headed not by the fight between Salimgerey Rasulov and Alikhan Vakhaev in the historically more prestigious category, but by the middleweight fight.

In December 2020, Artyom Frolov already unsuccessfully tried to cope with the wrestling skills of Magomedrasul Gasanov, and now he will make a second attempt.

As for the battle of heavyweights, both approach it on a series of seven victories, and it is quite difficult to single out a clear favorite.

But there is no reason to doubt Vakhaev's motivation.

Initially, he was supposed to fight for the trophy in March, but was injured and gave way to Rasulov.

As a result, the experienced Salimgerey easily dealt with Tony Johnson and became the champion for the first time in his career.

The final chord of the summer will be the next Dana White's Contender Series show, as a result of which Victoria Dudakova can get a contract with the UFC.

In amateur MMA, the Russian woman has reached great heights - in her track record is the gold of the European Championship and the bronze of the world championship, and in professionals she won five victories in a row, and all ahead of schedule.

Now she needs to get the better of the undefeated Brazilian.

Maria Silva is undefeated in any of her eight fights, one of which was in the DWCS.

But then Dana White was not impressed with her performance.