The national cycling team arrived in the Turkish city of Konya in preparation for the participation of the UAE delegation in the fifth edition of the Islamic Solidarity Games, during the period from the 9th to the 18th of this month, with the participation of 6000 athletes from 56 countries, competing in 24 sports through 483 sports competitions held effectively 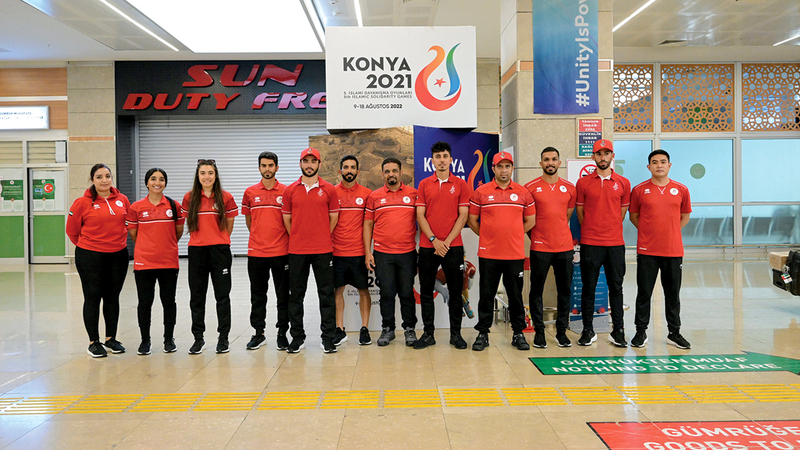 During the arrival of the cycling delegation to the city of Konya.

The national cycling team arrived in Konya, Turkey, in preparation for the participation of the UAE delegation in the fifth edition of the Islamic Solidarity Games, during the period from the ninth to the 18th of this month, with the participation of 6000 athletes from 56 countries, competing in 24 sports through 483 sports competitions held on 13 sites differently, with the attendance of 2,000 volunteers, and the UAE participates in nine different sports.

The team will compete on the first day of the track through Ahmed Al-Mansoori and Youssef Mirza in the men's scratch race, while Sheikha Issa and Zahra Hussein will participate in the women's scratch race.

The technical director of the national cycling team, Abdullah Sweidan, confirmed the readiness of the riders participating in the course, after going through many strong stations, whether at the level of participation, gatherings and camps, noting that the last period witnessed the establishment of a camp for the team that lasted for nearly a month in Italy, during which training was conducted in an atmosphere and conditions. Similar to the host city of Konya in terms of altitude above sea level.

He said: "Many countries are candidates for first places and gold medals, in light of the presence of countries such as Malaysia, Uzbekistan, Kazakhstan, Algeria, Indonesia and other strong and well-known countries in the world of cycling, and all the riders made great efforts in the Italian camp, including Youssef Mirza, the captain of the national team, who participated in Several races in conjunction with the camp within the Emirates Professional Team, in addition to achieving three colorful medals by cycling in the International Games for Police and Firefighters that recently concluded in the Netherlands, as well as the gold medal for Youssef Mirza in the points race at the Asian Track Championship in New Delhi last June, which It reflects the extent of continuous readiness to participate in all forums and focus on the same goal, which is to ascend the podiums and raise the flag of the state.”

Suwaidan pointed out that the Islamic Solidarity Games and its distinguished cyclists participating in world championships and Olympic Games make it difficult to predict the number of medals that can be achieved in the session.

He added, "We have great chances to win colorful medals through the men's and women's categories, and we will reserve a place for us on the podiums among the champions and riders present, because the UAE bikes deserve to be in the forefront always, and what we see from the players indicates their desire and commitment to achieve this, and despite the pressure of the camps and participations, they They are doing the best, as Jaber Al-Mansoori, Khaled Mayouf, Saif Al-Kaabi and Walid Al-Naqbi joined the team immediately after their successful participation in the International Police and Firefighting Games in the Netherlands, which reflects everyone’s keenness to represent the UAE sport in the desired image in various entitlements and forums.”

The nine games in which the UAE will participate in the tournament include: archery, bow and arrow, bow and arrow for people of determination, karate, judo, taekwondo, fencing, weightlifting, swimming, and cycling.

Al-Mardasi: The team trio is at the heart of the competition

The coach of the women's national cycling team, Sana Al-Mirdasi, said that "the trio: Safiya Al-Sayegh, Zahra Hussein and Sheikha Issa are in the heart of the competition, and they are not far from the advanced positions in the various competitions," noting that there are many participating teams that take the UAE into account due to what it possesses. One of the most promising and talented players in cycling.

She added: “We have difficult confrontations with the participating teams, including the Egyptian and Moroccan teams, and others, and we wish success in all the races that will not be easy, including the track race, which includes four races, including the aluminum one, and consists of six races alone, but in the end we always trust in the capabilities of the players. , especially in the case of experience elements such as Yusuf Mirza and all the riders who give the team a great push towards achieving achievements and winning medals.”