Victim of circumstances: how the departure of legionnaires called into question the readiness of CSKA for the season

CSKA Moscow found itself in an extremely difficult position before the start of the Russian Championship. Vladimir Fedotov still cannot find the perfect combination of players, as evidenced by three defeats in a row in pre-season matches. The mass exodus of legionnaires provokes new problems with the composition, for which the leadership of the army was not ready. Chidera Ejuke and Arnor Sigurdsson, who left the team, created a shortage of high-class performers on the flanks of the attack, and the possible departure of Yaka Biyola and the injury of Bruno Fuchs deprived the coach of room for maneuver in the center of defense. 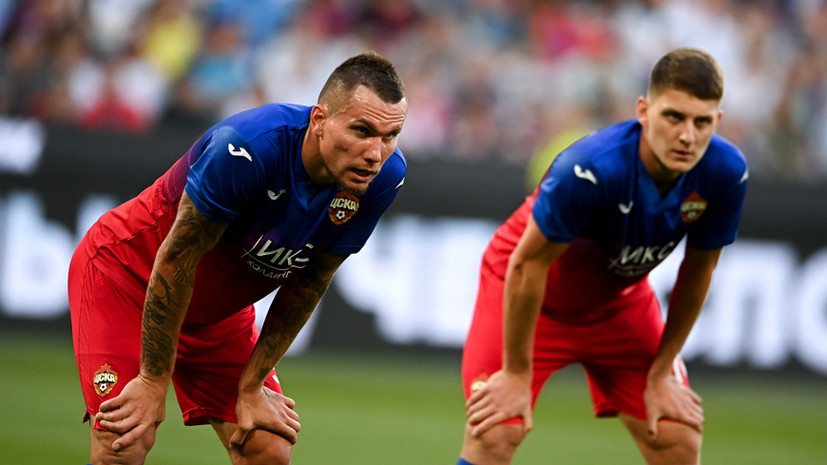 A few weeks ago, CSKA could be considered one of the main competitors of Zenit in the fight for gold medals.

The army team had a powerful clip with a whole scattering of skilful legionnaires, and one of the strongest coaches in the country, Vladimir Fedotov, who helped Sochi win silver last season, was appointed to lead them.

However, in just a couple of weeks, the team not only lost some of the star foreign players and lost depth, but it started extremely uncertainly in a friendly tournament, which only increased anxiety about its prospects.

Of course, one should not evaluate the state of the team by its results in the friendly cup.

Suffice it to recall how triumphantly Spartak performed at these competitions.

The Red-Whites have twice won first place in Doha, and a year ago they won three victories with a total score of 13:1 in Moscow.

But despite this, they failed the start of the season, losing in four out of five meetings.

And if the defeat of Benfica in the qualification for the Champions League hardly surprised anyone, then the losses to Nizhny Novgorod and Rubin came as a surprise.

The first only made his debut in the RPL, and the second was defeated at the same pre-season championship with a score of 4: 0.

Therefore, it is hardly worth drawing far-reaching conclusions on two defeats of CSKA at the PARI Premier tournament and one more defeat in a friendly game with Veles.

Of course, three failures with a total goal difference of 0:7 are unlikely to have a positive effect on the mood of the team on the eve of the start of the national championship and certainly do not encourage its fans.

But it must be understood that Fedotov started working with the army team relatively late and still continues to build a team and search for optimal combinations.

Suffice it to say that in total, the mentor managed to see more than three dozen (!) Players in action.

But many of them only yesterday defended the colors of the youth team, and some were even on view.

This clearly indicates Fedotov's desire not only to focus on developing connections between partners, but also to check the near and far reserves, which may well be involved in the course of the championship.

And in such conditions, there is not only no reason to demand victories from the team, but also sense.

At the moment, the coach is clearly dealing with other tasks, and one of them is to understand which positions need to be strengthened and which do not.

And judging by his recent statements, the conclusions are disappointing.

“We are now looking not for a striker, but for a team.

We now have one central defender, we need reinforcement in this area.

We are now in the minority.

It is worth noting that the mentor spoke in a similar vein both immediately upon appointment and after the defeat by the champion.

Unless then it was about strengthening several problem areas, while now they are talking about the need for global staffing.

And there are several reasons for this.

The first one is trauma.

In the summer, CSKA has already lost two players due to various kinds of injuries, and the absence of one of them created a colossal shortage of performers in the center of defense.

The infamous Bruno Fuchs has once again confirmed his status as one of the Red-Blues' biggest transfer failures in recent years and has been out of action for the ninth time in the past two years.

In total, the Brazilian has already missed almost a year, and his return is expected no earlier than July 18.

By this time, the army team will already have time to meet the Urals in the first round of the RPL and begin preparations for a fundamental confrontation with Sochi.

And it is likely that in it they will not be able to count on the Olympic champion as part of the Brazilian national team.

After all, in a couple of days he definitely will not have time to gain the necessary conditions.

The Croatian just returned from a loan spell at Fatih Karagumruk just a couple of weeks ago and has already made two appearances.

True, during the match with Zenit he received a muscle injury and did not play with Pari NN.

And now he also risks missing the starting round of the national championship.

But much more damage to potential contenders for medals was caused by FIFA, which allowed the players to unilaterally suspend contracts with Russian clubs.

If during the spring segment CSKA managed to keep all the athletes without exception, then this time many were not so accommodating.

The Icelander spent the last competitive year on loan at Venice and was hardly in the mood to return to Moscow.

He began to stagnate and lost the trust of the coaching staff back in 2021, and now he would be forced to fight for a place at the base.

He usually went out on one of the flanks of the attack, where both the recently acquired Jorge Carrascal and Jesus Medina, and Konstantin Kuchaev, who returned from rent, with Yegor Ushakov, can also play.

And this is not counting Fedor Chalov, whom Alexei Berezutsky often used as a winger.

Although this experiment can hardly be called successful.

In addition to the above players, Sigurdsson would have to compete with Ejuka if he also did not exercise the right to suspend the contract with CSKA.

And this despite the fact that the club clearly counted on a dribbler and were not going to lose another option on the flanks.

This is evidenced at least by his appearance at the start for the match with Zenit and the angry comments of representatives of Muscovites after the Nigerian's "escape".

So, Fedotov called Chidera's behavior "an outrage", and General Director Roman Babaev promised to file a complaint with the International Football Federation.

After all, the winger not only left the team in a difficult situation, but also did so after receiving a quarter of the salary for the year.

According to SalarySport, he was entitled to about €520,000 per season.

Biyol turned out to be the most loyal to the red-blue.

Although the Slovenian expressed a desire to leave Moscow, he decided to do it in accordance with all the rules of the football market.

If you believe the rumors, in the near future he will join the Udinese squad, and the transfer amount will be €5 million. €400,000 was spent on its purchase.

But even solid compensation is unlikely to greatly improve the current position of CSKA.

Pre-season training turned out to be crumpled, and the departures of Biyol and Ejuke added a headache to the club's selection department.

After all, now he needs to hastily strengthen not only the center of defense, which even before the departure of the Slovene seemed to be a problem area, but also the attack.

Of course, several players can play in the place of Chidera at once, but there are only two comparable to him in terms of skill - Medina and Carrascal.

Kuchaev, who left the RPL with Rubin, still cannot reach a qualitatively new level, and 19-year-old Ushakov is still unstable.

In defense, the situation is completely stalemate.

In addition to Igor Diveev, Fuchs, Vadim Karpov and Dmitry Kaptilovich are the “thoroughbred” central defenders.

But the first of the Russians had just returned from a lease at Tekstilshchik, and the second was transferred from a double.

And both are unlikely to meet the requirements of the team, which sets itself the task of fighting for medals.

Complicating everything is Fedotov's commitment to the scheme with three central defenders, which he actively played during the preseason.

In this case, the army team can hardly get the minimum number of performers to start, and there is simply no replacement left, because you can’t seriously count on Fuchs.

Yes, the universal Kirill Nababkin and Georgy Shchennikov can be located along the edges of Diveev, but this cannot be called a complete solution to the problem.

But there are not so many hopes for a qualitative strengthening from abroad.

As Babaev himself admitted, in the current situation, the RPL clubs have to either "kill legionnaires with money, or endure."

At the same time, the CEO emphasized that the first option does not suit the club.

And this is fully confirmed by the almost complete absence of rumors about possible newcomers.

The only exception is information about the possible return to the VEB Arena of Herdur Magnusson.

In the summer, the Icelander ended his contract with the team, and negotiations for an extension were unsuccessful.

Perhaps the reason for this was the unwillingness of the army team to offer more favorable conditions to an athlete who had just recovered from an Achilles rupture, because of which he missed a total of 247 days.

But in such difficult conditions, the red-blues may have no choice but to trust a person who has already proven himself, even if he is going through a difficult period in his career.

In addition, there is a gaping hole in the center of midfield, formed after the departure of Alan Dzagoev and Ilzat Akhmetov.

Surely it was supposed that Yusuf Yazici would fill it, but the failure in negotiations with Lille deprived CSKA of the team's top scorer last season.

And even Yuri Gazinsky, who recently underwent a medical examination, is unlikely to be able to compensate for his absence.

First, it is more focused on destruction than creation.

Secondly, his career is clearly on the decline.

On July 20, the midfielder will turn 33 years old, and last season he spent only 1058 minutes on the field in all tournaments as part of Krasnodar.

As a result, in just a few weeks, CSKA turned from one of the main competitors of Zenit into a team whose prospects seem extremely vague.

Even if Fedotov receives the necessary reinforcement in the coming days, he will not have time to properly integrate him into the squad before the start of the championship.

It's no secret that system coaches always need a little more time to introduce new players into the team mechanism, and he may well not have such a luxury.