“Showed themselves”: Kalnins was suspended from playing for the Latvian national team due to the signing of a contract with Amur

Janis Kalnins has been suspended from playing for the Latvian national team due to the signing of a one-year contract with the KHL club Amur. In the local hockey federation, this decision was explained by changes in the country's legislation and stressed that the goalkeeper will never again be called up to the national team, even if he returns home. According to Alexander Kozhevnikov, the goalkeeper made a strong move by agreeing to move to Russia. And Alexei Tereshchenko expressed confidence that many athletes on their way to the KHL would not be stopped even by harsh sanctions. 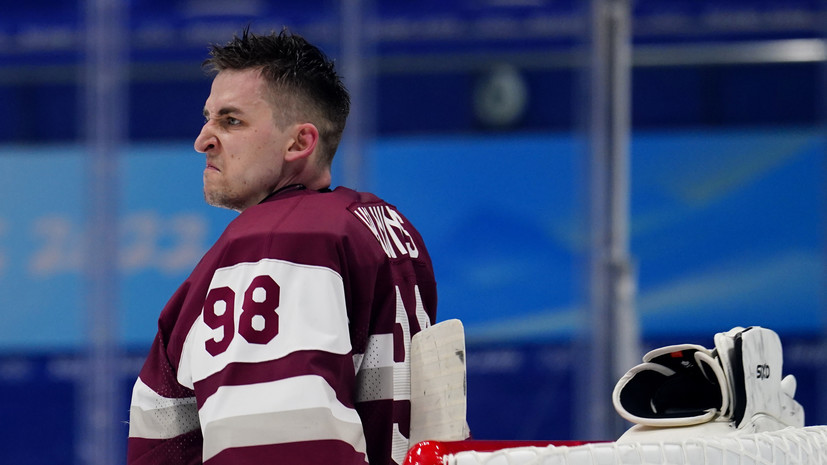 In the current realities, many athletes from European countries do not dare to move to Russia, fearing pressure in their homeland.

Therefore, the signing of a one-year agreement with the KHL club Amur by the goalkeeper of the Latvian ice hockey team Janis Kalnins was a big surprise.

“The contract was signed in full accordance with the regulations of the Continental Hockey League, and we are waiting for a newcomer at the training camp.

All procedures are completed, documents are issued.

The club is in touch with the player's side," the team from Khabarovsk said.

The 30-year-old goalkeeper himself explained his concern for the future of the family.

The athlete emphasized that he did not have long to play at a high level, and therefore he could not reject a profitable offer.

“This is an unpopular decision, but I made it because my career will no longer be long.

This option turned out to be the best for my family and life after hockey.

I am an adult and I understand what kind of reaction people will have, and how the media will turn it.

Each of us lives our own life and makes decisions that are best for us and our family,” Kalnins said in an interview with Sportacentrs.

However, this did not save him from harsh sanctions from the local ice hockey federation.

They announced that Janis would no longer play for the national team in accordance with changes in the country's legislation.

“There is no need for discussion and speculation as the Latvian government on April 30 amended the sports law, which clearly states that athletes and other sports-related employees are prohibited from participating in competitions held in Russia and Belarus.

We have always followed the rules and laws.

It should be noted that, according to it, persons who play sports in Russia or Belarus will be prohibited from playing in the Latvian national teams, ”R-Sport quotes the Secretary General of the Latvian Hockey Federation Roberts Pluzejs.

Moreover, according to him, even if Kalnins returns home, he will no longer receive a call to the national team and will lose the opportunity to work with her as a coach or other specialist at the end of his career.

At first glance, such a harsh verdict will hit the Balts themselves first of all, because they will lose an experienced reliable goalkeeper.

A native of Limbazhi in recent years, he was regularly called up under the banner of the national team.

With her, he took part in four world championships and the Olympic Games in Beijing.

In particular, in China, he spent three out of four matches.

In total, he has 25 meetings under the flag of Latvia in various tournaments.

The modest Amur, on the other hand, which in the last KHL draw took only tenth place in the regular championship and did not make it to the playoffs, has strengthened itself with a high-level performer, who has five seasons in the league behind him.

He made his debut back in 2016 as part of Dynamo Riga.

Two years later, the talented goalkeeper moved to Jokerit, with whom he twice made it to the Gagarin Cup.

In total, the Balts played 199 matches in the KHL and conceded 415 goals.

Last season, he was noted for two teams at once: the Swedish Vaksjo Lakers and the Finnish Tappare.

With the latter, Kalnins even became the champion of Finland.

He also won gold twice in the Latvian championship and once in Hungary.

Together with Janis, another hockey player of the Baltic national team Miks Indrashis was hit.

At the end of June, Spartak Moscow announced the signing of a one-year agreement with the striker.

However, a few days later, the athlete issued a statement in which he denied this information.

Spartak is unhappy with my refusal to play in Russia, hence their behavior.

I am a patriot of Latvia and have always demonstrated my attitude to the country on the ice, wearing the national team sweater at nine world championships in a row, ”Sport24 forward quotes.

But the club continues to insist: the contract was signed in accordance with the regulations and registered with the KHL Central Information Bureau.

In the event that Indrashis refuses to fulfill his obligations, he will have to pay compensation to the capital's team.

Unfortunately, the example of Kalniņš is not the only precedent of this kind in European sports.

So, the Polish footballer Maciej Rybus was suspended from playing for the national team after he joined Spartak as a free agent.

It was not taken into account that the defender spent most of his career in Russia and is married to a native of North Ossetia, Lana Baimatova, with whom he has two sons.

The Swedish basketball player Jonas Jerebko, who signed an agreement with CSKA in March, also suffered.

After that, the local federation emphasized that there are “no conditions” for one of the strongest players in the country to represent the national team.

Experts interviewed by RT remained at a loss from the removal of Kalnins and admired his courage.

Thus, two-time Olympic champion Alexander Kozhevnikov called for the creation of all conditions for the hockey player in Russia so that he could not worry about his future fate.

“We must not forget that the problem is not only Janis.

At home, he probably had parents and other relatives who could be harassed.

The person needs to be supported.

Nothing surprises me anymore.

There are scoundrels everywhere.

In the Baltics, this is how their children were brought up.

Therefore, I simply do not understand how Janis had the will to go to Russia.

This is a very strong move.

I repeat, in Russia they should help him so that everyone understands: we are not abandoning our own.

And here we are not talking about those hockey players who arrived today and left tomorrow, ”Kozhevnikov emphasized.

According to him, the current political situation has become a litmus test for legionnaires and has demonstrated their human qualities.

And in no case should one forget about the statements and actions of some of them.

“For example, Canadians are loyal to Russia and are in no hurry to terminate contracts with KHL clubs.

Many of them continue to perform with us, although the country's leadership does not treat Russia in the best way.

As for Europe, this is a completely different topic ... They have shown themselves, and there is no faith in anyone.

People are afraid of everything, and they had no principles.

And when such legionnaires want to return, we must remember how they treated us at a difficult moment.

Otherwise, it turns out that we constantly forgive everyone, ”added Kozhevnikov.

In turn, three-time world champion Alexei Tereshchenko admitted that he was not surprised by what happened to Kalnins.

Unfortunately, Janis should not expect support from the IIHF, which could condemn such decisions of the national federations.

They do not have the courage to make such a proposal.

What to talk about if Russia was indefinitely suspended from all competitions and no appeals were accepted.

I don't understand how this is possible.

And the deed of Kalnins causes boundless respect.

And pay attention, he went far from the top club, ”Tereshchenko said.

However, in his opinion, even the tough act of the Latvian Hockey Federation will not become an obstacle for foreigners on the way to the KHL.

Someone is afraid and carefully weighs the pros and cons, but someone doesn’t care.

I am sure many will not pay attention to the possible consequences.

We should take things calmly.

Whoever wants to play in Russia is welcome.