Peskov's reaction, FHR's appeal to government agencies and filing a lawsuit: how the scandal with the participation of hockey player Fedotov develops

Alexey Ponomarev, the lawyer of the goalkeeper of the Russian national team Ivan Fedotov, announced that he had filed a lawsuit with the court and a complaint with the military prosecutor's office. However, he refused to answer the question about the whereabouts of the client. According to media reports, the hockey player has arrived in Severodvinsk, where he can stay at the training center until September. Meanwhile, the FHR reported that they had applied to state bodies "to clarify the details of the case." And according to the press secretary of the President of the country Dmitry Peskov, emotional comments in the current situation are inappropriate, since all the details about the draft are clearly spelled out in the legislation. 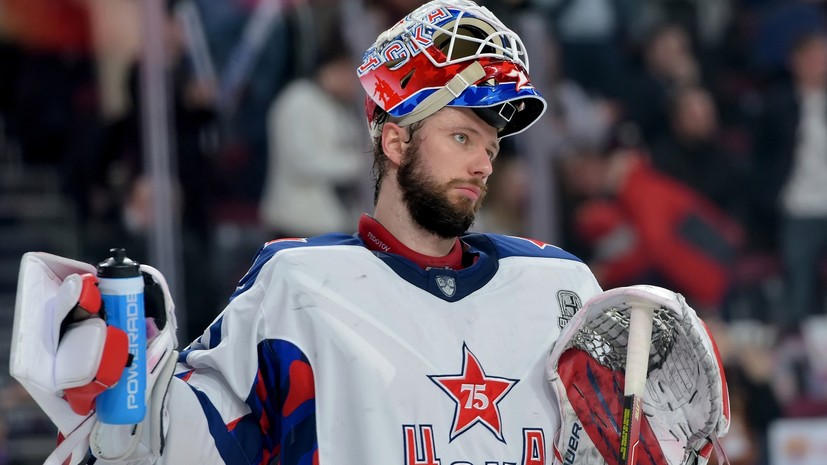 On July 1, the hockey player, according to his lawyer Alexei Ponomarev, was detained on suspicion of evading service and taken to the military registration and enlistment office.

Since then, there has been no official information about the whereabouts of the athlete.

However, the media claim that he arrived in Severodvinsk in the Arkhangelsk region, where the 907th training center of the main command of the Navy is located.

According to Fontanka, the goalkeeper will stay there until September, after which a verdict will be made on where he will go to serve.

However, according to the ArenaBreda Telegram channel, he has allegedly already been informed that he will stay in this unit for the whole year.

And sports journalist Daria Tuboltseva added that in Severodvinsk, a young man will even have the opportunity to train and play hockey.

At the same time, the head of the press service of the Northern Fleet, Vadim Serga, emphasized that Fedotov is not yet on the list of military personnel.

“All conditions have been created in the Northern Fleet so that they master not only military specialties, but also be able to engage in their hobbies or sports.

If we talk about hockey, the Northern Military Hockey League has been operating in the Northern Fleet for several years, which includes 22 teams,” Serga told TASS.

Finally, the R-Sport source considers the conflict with CSKA to be the main reason for what happened to Ivan.

He noted that military-age athletes who are part of the Russian national teams, in agreement with the Ministry of Defense, are usually sent to the sports company.

“Fedotov had a fight with the army.

It's all a matter of contacts, ambitions of the goalkeeper and another person.

It is clear that everyone must serve.

But at the same time, there is an approved procedure that did not suit Fedotov, ”the source explained.

The goalkeeper's lawyer declined to comment on the client's whereabouts, but announced that a lawsuit had been filed in court.

“As I said earlier, in it we demand to declare illegal and cancel the decision of the draft board.

They also turned to the military prosecutor's office, ”TASS quotes the lawyer.

Meanwhile, the scandal involving the hockey player caused such a serious resonance that even the press secretary of the country's president, Dmitry Peskov, reacted to it.

He stressed that there can be no “human comments” in this situation, since all Russian citizens, including athletes, are liable for military service.

“Here, some emotional words are absolutely inappropriate, there are certain reasons for delays, modes of service, including for athletes,” Peskov told reporters.

Sports Minister Oleg Matytsin also spoke about the incident, stressing that he is in close contact with the Ministry of Defense and promised to continue cooperation with his colleagues if such a need arises.

At the same time, he urged everyone to follow the laws in order to avoid such situations.

In turn, the head of the Russian Hockey Federation, Vladislav Tretiak, assured that he was following the scandal that had erupted.

According to him, the FHR has already applied to state bodies "to clarify the details of the case."

Finally, Valery Fadeev, Chairman of the Russian Presidential Council for the Development of Civil Society and Human Rights, expressed his readiness to join the discussion if necessary.

“This will not affect the departure of the guys to America.

Absolutely local event ... Do not exaggerate the scale of this episode.

As soon as documents appear or sports activists raise this topic, I will immediately connect.

But he has no right to decide something on his own, ”Fadeev said in an interview with RBC-Sport.

Acting State Counselor of the Russian Federation Mikhail Markelov, in turn, suggested that the medical examination, which the athlete could pass in CSKA, was not the basis for deferment from the draft.

“There is a certain procedure - what, for example, my question arises.

I am a serviceman, my entire entourage served in the army in different years.

But no one was ever taken away on the street.

A summons arrives at the place of residence - on the basis of this summons, you appear at the military registration and enlistment office, and you are not immediately taken into the army.

You must pass a medical examination, ”Markelov said on the air of Match TV.

Two-time Olympic champion Vyacheslav Fetisov, although he called what happened to Fedotov an untimely event, recalled that he is a citizen of Russia and is obliged to serve, like ordinary people.

In addition, according to him, in some European countries there is a similar legislation.

“He should have been taken away at the age of 18, but for some reason this was not done.

Maybe now it is not timely, and the situation has received a great response, but from the point of view of the law, everything is correct, there can be no complaints here.

In European countries where there is a constitutional obligation, athletes do military service.

As far as I know, it works in Finland.

Previously, hockey players also, upon reaching the age of 18, were drafted into the army, someone studied at universities, received a detachment, but we fulfilled all our obligations to the country, ”Fetisov said.

But the well-known commentator Dmitry Guberniev, on the contrary, stood up for the goalkeeper.

In his opinion, it is worth respecting the regalia and the status of a goalkeeper.

At the same time, he reproached the hockey player for frivolity.

“First, you need to ask him first, what were you thinking about?

Fedotov had seven years to resolve the issue with the army.

For example, you could easily go to serve in a sports company, while playing hockey ... The second option is a military department.

The third is military service, ”the RTVI journalist quotes.

The dispute on the live TV channel "Match TV" even led to a conflict between Guberniev and State Duma deputy Sultan Khamzaev.

The latter emphasized that the position of the public is that Fedotov should serve, and reproached the commentator for trying to politicize the issue.

In response, he entered into a skirmish, and a minute later he disconnected from the conversation with the words “I don’t go live with idiots!