All 13 gold medals in the World Championships! You can always trust the Chinese diving team

"You can always trust the Chinese diving dream team!"   "We've got the gold medal!" Image source: Screenshot of Weibo comment   In the long-lasting praise, the Chinese diving team drew a successful conclusion to the trip to Budapest.   In the early morning of the 4th Beijing time, the 2022 Budapest Swimming World Championships ended the competition for diving. In the men's 10-meter platform 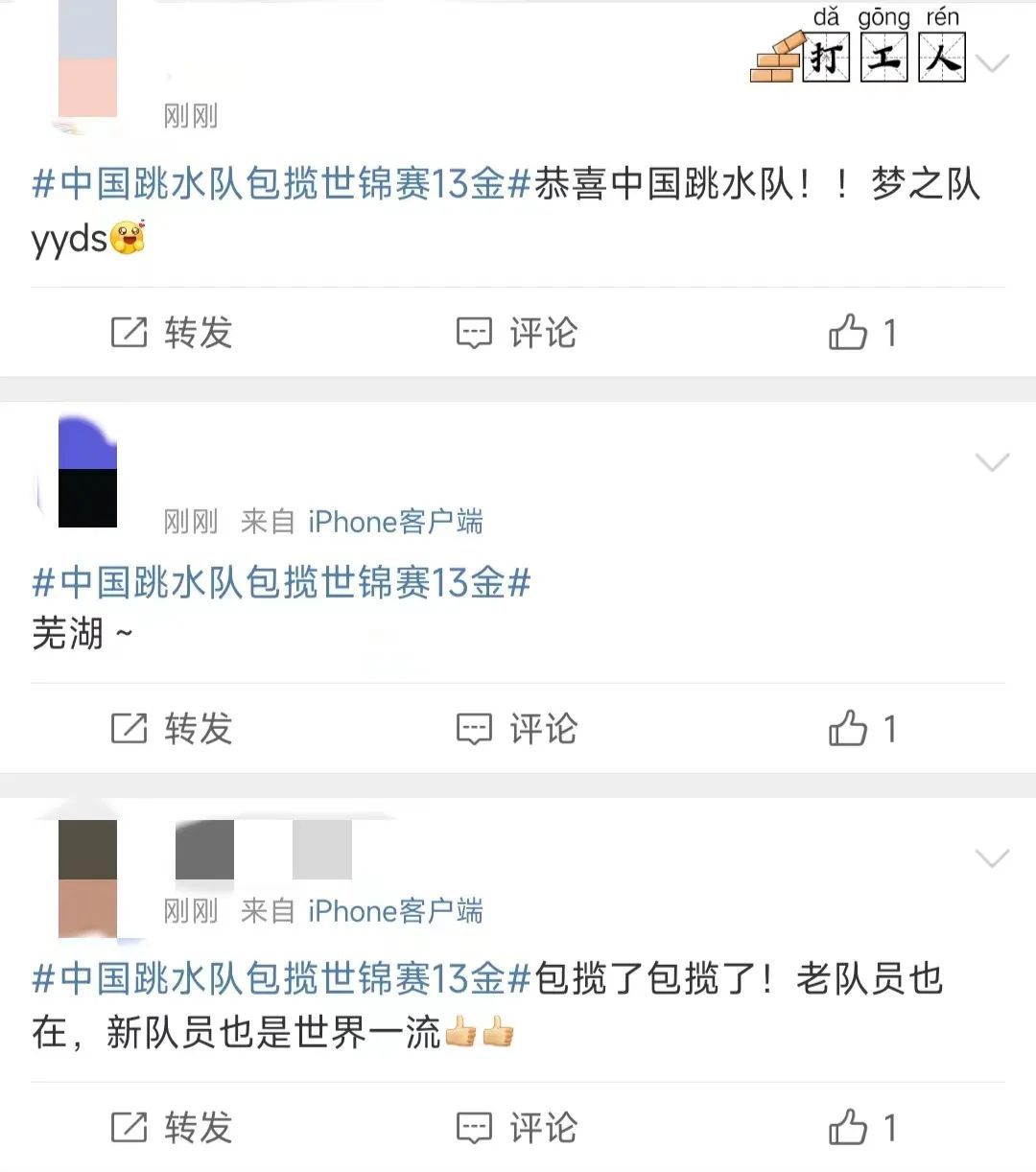 "You can always trust the Chinese diving dream team!"

"We've got the gold medal!"

In the long-lasting praise, the Chinese diving team drew a successful conclusion to the trip to Budapest.

In the early morning of the 4th Beijing time, the 2022 Budapest Swimming World Championships ended the competition for diving.

In the men's 10-meter platform final, Yang Jian of China, known as the "King of Difficulty," won the gold medal with a score of 515.55, and another Chinese player, Yang Hao, won the bronze medal.

With the perfect presentation of the difficult 109B action, he successfully won the gold medal.

So far, the Chinese diving team has swept all 13 gold medals in the diving events of the World Championships!

Most of the games are held in the early morning of Beijing time, but many netizens who witnessed the whole process of the Chinese team winning 13 golds exclaimed: staying up late is worth it!

Bring the old to the new, the effect is gratifying

With the old and the new, in such a way, the Chinese diving team started the journey of the Paris Olympic cycle.

Before going to the World Championships, the team stated that this time, with the goal of the Paris Olympics, through the competition, the team will be trained, problems and shortcomings will be identified, the ability of young athletes to participate in international competitions will be tempered, and the coaching level of young coaches will be improved in the international arena.

It now appears that such an attempt was undoubtedly successful.

Cao Yuan, a veteran player in this team.

He partnered with Wang Zongyuan to win the first gold medal for the Chinese team in the diving event of this World Championships.

When watching the game, many spectators may notice that Cao Yuan has a thick bandage on his left shoulder.

The passage of time has left injury marks on the veteran's body.

This is the 5th time for 27-year-old Cao Yuan to stand on the stage of the World Championships. Before he knows it, he has become the big brother of the team.

In 2015, Cao Yuan and Qin Kai won the men's double 3-meter springboard championship for the first time at the World Championships.

In the past seven years, his injuries have increased, and his partner has been replaced by Wang Zongyuan, who is under 21 years old, but what remains the same is his persistence and his desire for championships.

"I feel honored to win the first gold medal for the diving team. Although I won the gold medal, I feel a little regretful, especially the last jump is not satisfactory." Cao Yuan said after the game.

Always humble, he said that if he could focus more, his grades might be better.

And this may also be the motivation for a veteran to continue to persevere in the future.

In that game, Quan Hongchan competed for the springboard in an international competition for the first time, and Bai Yuming ushered in his world championship debut.

The successful summit of the two is also the epitome of the performance of the young Chinese team in this competition: amazing and full of hope.

From Chen Yuxi and Quan Hongchan's "fight with gods" on the 10-meter platform, to Chen Yiwen's help in the women's 3-meter springboard event to help the team win 11 consecutive World Championships...

Although many young players do not have rich experience in competitions, they have experienced the previous in-team test matches, and they have become dazzling stars on the stage of the World Championships.

Compared with Chen Yuxi and Quan Hongchan, who have emerged in the Tokyo Olympics, many people are not familiar with Chen Yiwen born in 1999 and Chang Yani born in 2002.

With Shi Tingmao and Wang Han fading out, they have become the main players of the Chinese team in the women's double 3-meter springboard event.

Through the performance of this world championship, they let the outside world remember their names.

It can be seen that after entering the Paris Olympic cycle, the Chinese team that has completed a partial "exchange", the "post-00s" players began to take on more important responsibilities.

Warm moments in the game

In the women's 10m platform final, the duel between Chen Yuxi and Quan Hongchan attracted much attention.

After 5 rounds of competition, Chen Yuxi won the championship of the World Championships with a 0.3 point advantage.

As a partner and opponent, before going to the World Championships, Chen Yuxi said about his relationship with Quan Hongchan: "We are a healthy competition, and only when there is competition can we improve."

After the women's 10-meter platform final, Chen Yuxi and Quan Hongchan hugged each other for a long time on the sidelines.

This is also the testimony of Chen Yuxi and Quan Hongchan growing together in each other's best years.

From acquaintance at the 2020 National Diving Championship, to joining hands to go to Tokyo, and then once again stunning the world, two talented girls are carrying the banner of Chinese women's platform diving.

#Believe Quanhongchan Believe in Chen Ruolin#, behind this hotly debated topic is a story of a new master and apprentice working hard for their dreams.

At the end of last year, the Olympic "Five Gold Kings" Chen Ruolin became the head coach of the Quanhongchan national team.

One is a legendary player in the women's 10-meter platform, and the other is a teenager who conquered the world with 3 perfect moves in Tokyo. The two have attracted much attention since they held hands.

In this World Championships, after Quan Hongchan finished a set of moves, Chen Ruolin would always give applause to the little sister.

During the competition, Quan Hongchan made a mistake when completing 207C, and Chen Ruolin immediately sent encouragement to the disciple.

As soon as the camera turned, she patted Quan Hongchan on the shoulder, put her in her arms, and explained patiently...

This is Quan Hongchan's first trip to the World Championships, and this new pair of mentors and apprentices will go through more journeys together.

A team you can always trust

This time in Budapest, China's diving "Dream Team" made another brilliant achievement.

The picture shows Chen Yuxi and Quan Hongchan taking the championship and runner-up.

The team is very young, and many duos are paired in team test matches.

But even so, we can still shout: You can always trust the Chinese diving team.

At the Danube Aquatic Centre in Budapest, we once again witnessed a wonderful story.