Suspicion of evading military service and calling an ambulance: what is known about the scandal involving Fedotov

On Friday in St. Petersburg, the goalkeeper of the Russian national hockey team Ivan Fedotov was detained. This happened in front of the film crew of one of the TV channels. According to the journalist, at the exit from the Ice Palace they were met by a group of ten people without identification marks. The reason for what happened, allegedly, may be evasion from military service. The goaltender himself, who signed with the Philadelphia Flyers in May, declined to comment on the matter, as did his agent. In turn, Ivan Solovyov, Honored Lawyer of the Russian Federation, emphasized that a high-level athlete could solve such problems in advance for a long time. 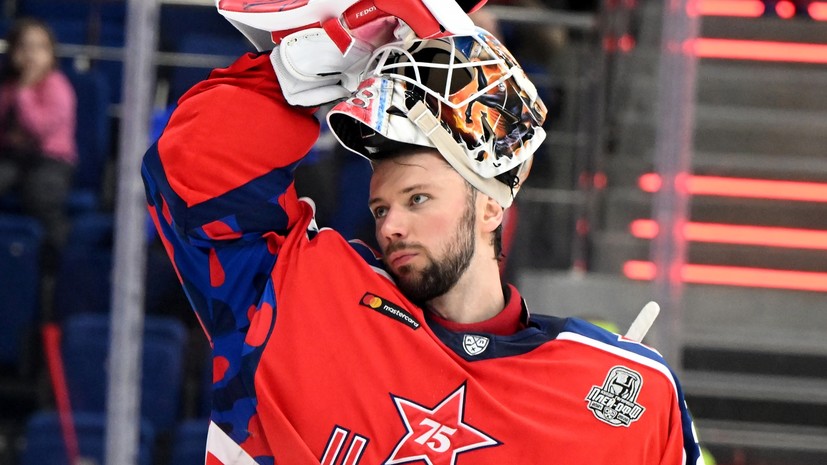 The goalkeeper of the Russian national team was detained in St. Petersburg.

Details of the incident were reported by Fontanka.

According to the publication, the athlete is accused of evading military service and, according to Article 328 of the Criminal Code of the Russian Federation, he faces up to two years in prison.

Allegedly, in order to deliver the young man to the draft board, a whole special operation was organized.

On July 1, employees of the criminal investigation department and SOBR were waiting for the goalkeeper at several points in the city at once.

The initiator was the military prosecutor's office, which applied with a corresponding request to the Main Directorate of the Ministry of Internal Affairs for St. Petersburg and the Leningrad Region.

It is noted that the interest of law enforcement agencies is also associated with Fedotov's alleged desire to "arbitrarily and illegally" terminate the contract with CSKA, whose colors he defended in the previous season.

Ivan was detained in front of Match TV correspondent Anna Andronova and a cameraman who were preparing a story about the hockey player.

First, they filmed a training session at the Ice Palace, and then planned to interview him in the park.

However, a group of about ten people were waiting for them at the exit.

Two of them were in camouflage, and the rest were in civilian clothes.

One approached the hockey player and, showing his ID, escorted him to the car.

The journalist tried to find out from the men what was going on, but received no answer.

According to her, they acted quite tough.

“The moment they put him in the van, I ran up to one of the cars.

The man did not have time to close the door, I managed to hold it.

They answer me: "Nothing."

At this point, he kept trying to close the door.

I asked where they were from, they told me: “It doesn’t matter,” Andronova described the dialogue.

The press service of the Main Directorate of the Ministry of Internal Affairs of Russia for St. Petersburg and the Leningrad Region noted that they did not have information about the detention of the goalkeeper.

The same answer was given in the Central Military Commissariat of the Northern Capital.

Fedotov himself picked up the phone after a call from one of the journalists, but declined to comment.

And his agent Ivan Parashkin stressed that he was not aware of the details of what had happened.

Briefly reacted only in CSKA.

"We are sure that the competent authorities will sort out this situation," they stressed in the camp of the army.

Nevertheless, according to Izvestia, the athlete was indeed taken to the military registration and enlistment office.

There, the young man felt so bad that he was taken away by an ambulance.

If Fedotov's guilt is proven, he faces a serious punishment.

Article 328 of the Criminal Code "Evasion of military and alternative civilian service" provides for a whole list of sanctions: a fine of up to 200 thousand rubles.

According to the honored lawyer of the Russian Federation Ivan Solovyov, their application depends on the circumstances and the behavior of the accused.

“There is a whole list of mitigating factors in the form of an admission of guilt, the presence of services to the country.

All this can affect the verdict, ”he explained in an interview with RT.

A serious punishment for the goalkeeper can also be a ban on traveling abroad, because in early May he signed a contract with the Philadelphia Flyers NHL club.

In turn, sports lawyer Artyom Patsev stressed that the relevant law does not provide for deferrals for athletes, and therefore, in matters of conscription, they are no different from ordinary citizens.

But State Duma deputy Svetlana Zhurova spoke about a special directive according to which athletes who are part of the Russian national team can not be drafted into the army.

“They must serve - in sports companies, in military departments.

Regardless of whether they are hockey players, football players or skaters ... And if he plays for the national team, the federation had to submit a special paper to the Ministry of Defense.

Whether the FHR did it or not is the question, ”said the Olympic champion.

One way or another, one of the most talented goalkeepers in Russia risks losing the opportunity to leave for the NHL.

In recent years, the graduate of SKA has made serious progress.

He made his KHL debut back in 2014 with Neftekhimik.

Two years later, the goalkeeper moved to Salavat Yulaev, and in 2019 to Tractor.

Finally, last year Fedotov became a hockey player for one of the country's leading clubs, CSKA.

Ivan quickly became a key performer for the army team and helped the team win the Gagarin Cup.

And the athlete himself was absolutely deservedly recognized as the best in his position in the league.

He was also the main one in the Russian team, with which he won silver medals at the Beijing Olympic Games in February.

It is not surprising that Philadelphia showed interest in the talented athlete.

In early May, the Flyers announced the signing of a one-year agreement with the domestic hockey player.

Now, if a criminal case is initiated against him, the club, according to media reports, can “freeze” his contract for a similar period so as not to lose the rights to a promising goalkeeper.

“In a year, they will be waiting for him again in the Philadelphia camp when he solves his problems.

Yes, despite the international situation in the United States, they still understand that duties to the military registration and enlistment office and the country are a serious matter.

And if Fedotov couldn’t resolve this issue before the age of 25, Philadelphia won’t help, ”a Match TV source said.

Moreover, NHL Deputy Commissioner Bill Daly assured that the league is aware of what happened and are monitoring developments.

In Russia, the situation in which Fedotov found himself caused a mixed reaction.

Allegedly, Muscovites decided to educate the hockey player using Soviet methods, when young athletes were forced to play for army teams, threatening to be called up for real military service.

“I think this is the machinations of CSKA.

Vanya did not want to stay in the club, he is of military age.

And let's draft him into the army ... There can be no other option, ”the Championship quotes Mayorov as saying.

In turn, Alexander Kozhevnikov, on the contrary, expressed confidence that law enforcement agencies had detained the goalkeeper in the case.

“It’s just that we don’t accept anyone.

So, it hit somewhere.

Suspected of evading the army?

We have a constitution.

He himself is to blame.

This may have a bad effect on Ivan's career.

However, I think people will understand this situation.

I had to study at the institute and raise my education, and not just play hockey, ”said the two-time Olympic champion.