No trembling in the knees: athletes Lasitskene and Shubenkov complained about the lack of competition in the Cup of Russia

In Bryansk, the Russian Cup in athletics was held, in which almost all the strongest athletes of the country took part. Nevertheless, the leaders of the domestic team Maria Lasitskene and Sergey Shubenkov complained about the low level of competition, which prevents them from showing decent results. Both won victories in their events, but were far from personal records. The three-time world champion said that she did not have enough "shivering in the knees", and the Russian record holder would like more acute emotions. 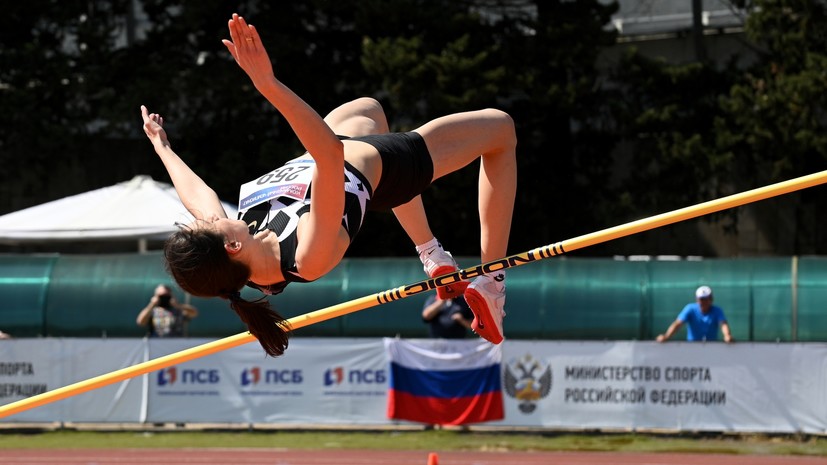 On July 1-2, Bryansk hosted one of the important stages of the Queen of Sports series - the Russian Cup, which brought together almost all the strongest athletes in the country.

However, even in such conditions, the leaders of the national team lamented the lack of competition, which prevents them from showing high results in domestic competitions.

The Russian Cup attracted attention for a number of reasons.

First of all, it was one of the main opportunities for athletes to test their fighting condition on the eve of the Russian Championship, which will be held in early August in Cheboksary.

In addition, it was there that the silver medalist of the 2020 Olympics Anzhelika Sidorova opened the season, and the owner of the best result of the season in the world in high jump Ilya Ivanyuk planned to storm a height of 2.40 meters.

And, of course, the performance of the main domestic stars - Sergey Shubenkov and Maria Lasitskene - is always of interest.

The competition was opened by such a spectacular view as pole vaulting.

Interest in him was fueled by the fact that the other day at the Diamond League stage in Stockholm, Swede Armand Duplantis set another world record - 6.16 meters.

But, unfortunately, in Russia this season no one even got close to the six-meter mark.

Timur Morgunov also won in Bryansk with a score of 5.60 meters, and this, of course, is a very modest figure for an athlete whose personal record is 6.00.

In women, gold went to Polina Knoroz, who overcame the bar at a height of 4.70 meters.

Angelica Sidorova, from whom they expected victory and high jumps, became the second, losing 5 cm to the result of the winner. Moreover, the titled athlete deliberately missed the mark of 4.70, but failed all three attempts at 4.75 meters.

It does not add up yet in the sector of the ex-world champion in long jump Alexander Menkov.

In Bryansk, he showed only the fourth result - 7.75 meters, and the victory went to Danil Kornev, who flew 7.97 meters.

After the tournament, a native of the Krasnoyarsk Territory complained about the wind, but generally admitted that the figures shown are a reflection of real readiness.

According to the athlete, he managed to get rid of the old injuries that had tormented him over the past years, but at the tournament in Tver, where he had to jump on the platform, he received a new injury.

Therefore, I doubted until the end that he would be able to perform in Bryansk at all.

“It could happen that after the first attempt I would have refused to continue, saying that it was very painful.

But no, it didn’t hurt, and I’m glad that I jumped six attempts, in principle, not bad.

Of course, I don’t like running, I don’t like the result either, but I’m glad that I’m leaving here at least alive, ”Match TV quotes Menkov.

In the high jump, unlike the Athletics Week in Moscow, there were no surprises: Maria Lasitskene won gold, confidently overcoming 1.94 meters on the first attempt.

But the assault on the bar at around 2.00 was unsuccessful three times.

As the Olympic champion admitted, she lacks adrenaline and competition for higher jumps.

“Unfortunately, trembling knees are hard to achieve in our sector.

Yes, you don’t need to think at all what you need (to jump 2 meters. -

You just need to do it.

I tried so hard today.

The start was absolutely real, I even had jitters when we were getting close to 1.94, a competitive spirit.

The sector is very good, the fans, I liked everything.

I felt good, but not enough to jump 2 meters, ”RIA Novosti quoted the jumper as saying.

In addition, the athlete said that she had recently received an American visa - she flew to Belgrade specifically for this.

Documents were submitted to the US Embassy last year, when Russian athletes were not yet suspended from the World Championships, which will be held in Eugene July 15-27.

“I’m afraid that I will never need an American visa, it’s very sad, but the sponsor tried to make it for me for a year, I couldn’t help getting it.

It is very sad that it exists, and circumstances do not allow me to use it, ”said the three-time world champion, who this year will not be able to defend her title.

But if at the Znamensky Memorial in Moscow, the Bryansk athlete overcame the bar at a height of 2.34 meters, setting the best result of the season in the world, then at the National Cup the result was a little more modest - 2.30.

Already in the status of a winner, Ivanyuk asked to raise the bar by 2.35 meters, but after two attempts he finished his performance.

Thus, the intention to jump in his hometown of 2.40 meters, which Ilya spoke about in June, could not be realized.

Probably, the bronze medalist of the 2019 World Championship, like Lasitsken, did not have enough competition, because his main rival in Russian tournaments, Mikhail Akimenko, withdrew from the competition at the last moment due to an aggravation of the injury.

He may even be forced to miss the rest of the season if the doctors do not give the go-ahead to return to training.

Lacking strong opponents on the track and ex-world champion in the 110 meters hurdles Sergei Shubenkov, although even in such conditions he continues to improve the result from tournament to tournament.

If at the first start of the summer, the national team championship, he ran the distance in 13.59 seconds, then in Bryansk he finished with a score of 13.27.

The second place was taken by Artyom Makarenko, who lost 0.34 seconds to the winner.

“I would say that even today I am a little better prepared than I ran, but there is a little lack of competitive courage.

I always have such seconds in Russia.

Competition is needed, emotions are a little sharper.

I can't get anything else out of here.

And in training, the form is excellent.

I break different records there, ”RIA Novosti quotes the athlete.

He noted that speaking now at international tournaments, he would have lost a couple of tenths of a second from the result without any problems.

At the same time, Sergei admitted that he was trying not to think about how long the removal of the Russians would last.

“I rarely talk to people about these topics.

I've moved a little away from everything.

In order not to warm the head once again, he is focused on work.

And this season was originally planned to be semiconductor.

Let's work calmly, compete, save our legs, extend our career.

So far, it’s working out, ”concluded the athlete.

Before the Russian Championship, athletes are waiting for three more tournaments - the Grand Prix of the Moscow Region, the Abramov Memorial and the Way to Olympus.

Some athletes who managed to get a neutral status in World Athletics will be able to take part in the Belarusian Open Cup on July 12.

Lasitskene has already announced her forthcoming trip to Brest.