“A strange fight in terms of morality”: why the confrontation between Emelianenko and Silva does not make sporting sense

Alexander Emelianenko after the duel with Vyacheslav Datsik will meet with Antonio Silva, who in 2011 sensationally defeated his older brother Fedor. The ex-star of UFC and Strikeforce approaches the confrontation with the Russian on a series of seven defeats in a row, six of which are by knockout. And the domestic athlete continues to experience problems with alcohol and is trying to get in shape in a rehabilitation center. According to the famous fighter Ivan Shtyrkov, the meeting of veterans does not make sense from a sporting point of view, and for a compatriot, any blow threatens to be fatal. In turn, the well-known promoter Vadim Finkelstein expressed confidence that the rivals simply want to earn the last money in their careers. 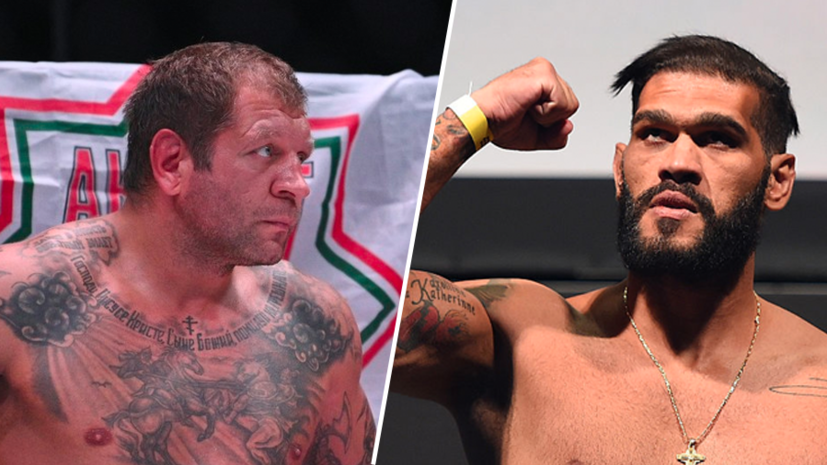 "You won against my brother, now let's fight with me"

Alexander Emelianenko, despite not the best state of health and a far from sports lifestyle, continues to be one of the most sought-after fighters in the country.

In September, he will hold a long-awaited fight according to the rules of boxing with Vyacheslav Datsik, and after in MMA - with Antonio Silva, the offender of his older brother Fedor.

Officially, the manager of the Russian Nikita Burchak announced the meeting.

“Another legendary confrontation is on the way.

Thanks to the haters and those who support.

And we plow and move on,” he wrote on social networks.

The athlete himself confirmed the information and posted a video from the Hardcore tournament, after which he entered the cage and challenged Silva.

Appearing on the canvas, he jokingly stated that he did not eat "any nonsense", but he was ready to eat Antonio for dinner.

Most of their conversation turned out to be devoted to the memorable battle with the Last Emperor.

So, Emelianenko called the opponent's victory an accident.

“You won against my brother, now let's fight me.

I will beat you ... Then you did not show anything special, get ready to be beaten, ”said the 40-year-old athlete.

He, in response, suggested that Alexander overslept the broadcast, and advised him to talk with an eminent relative so that he could talk about the strength of his fists.

The Russian promised to hurt his opponent and stressed that he had aged a lot.

The Brazilian, on the contrary, behaved emphatically respectfully and even called Emelianenko Jr. a legend.

“I am the person who hit Fedor more than anyone else.

I bow to you, but I don’t understand why you hide behind your own brother, ”Silva expressed bewilderment.

Problems with alcohol and a series of defeats

The meeting of two heavyweights could have generated great interest if it had taken place ten years ago.

Now it is more like a confrontation between "downed pilots".

Alexander's serious problems with alcohol have long been known.

At the end of May, he appeared at one of the interviews in a terrifying state: he could hardly stand on his feet and, not without problems, connected words into sentences.

After what they saw, the fans had serious doubts that the duel with Datsik would take place, and the experts feared that any blow missed by the veteran threatened to be fatal, and therefore it should not be released into the cage.

Emelianenko's team tried to do everything to bring the ward back to normal.

He was sent to a special rehabilitation center in Yekaterinburg, from where the athlete uploaded videos with jogging in the forest and work on the paws.

“Everything is fine, I recovered.

Now I'm going to get in shape before the fight.

I already run crosses, work with iron and bag.

I wake up early in the morning and run 3 km.

After - breakfast, in the afternoon - either iron, small weights per volume, or - on a bag for 30 minutes.

In the evening, there is a bath periodically, ”the athlete told about his daily routine.

But in June, during a tete-a-tete meeting with Bigfoot, Alexander still did not look his best.

According to media reports, a trip to Moscow turned into a new binge for him.

Unfortunately, there is no guarantee that on the eve of confrontations with Datsik and Silva, he will not break down again.

The former UFC and Strikeforce star rather continues to enter the cage out of inertia and fail after failure.

The statistics of the Brazilian is really depressing, because in the last ten fights he has nine defeats in his liability, eight of which were by knockout.

The career of the once eminent athlete finally went downhill in 2016 after being fired from the UFC.

But, left without a contract with the strongest promotion on the planet, Antonio came to Russia with pleasure, where he was remembered (including thanks to the victory over Emelianenko Sr.) and offered good fees.

Since then, three compatriots have managed to avenge the Last Emperor at once: Ivan Shtyrkov (by unanimous decision of the judges), Vitaly Minakov and Oleg Popov (both by knockout).

The last match turned out to be especially revealing, in which a fighter from the Fedor Team sent the opponent to the canvas already at the 15th second of the second round.

One gets the impression that in the confrontation with the "broken" opponent, to use the terminology of MMA, Emelianenko Jr. has a good chance of winning if he manages to get in shape and does not allow an alcohol breakdown.

Recently, both athletes rarely resort to wrestling, and therefore will bet on a knockout blow.

This means that Alexander will not have to spend a lot of time in the cage and he has the opportunity to quickly end the confrontation.

In this regard, the choice of an opponent by the Russian team looks completely logical.

Suffice it to recall that his last opponent was another retired MMA legend, Jeff Monson.

"Meet to earn the last money"

Some did not see the confrontation between two veterans of the sports component.

So, according to the famous fighter Ivan Shtyrkov, the organizers intend to make money on the big names and former glory of the athletes.

“Alexander is able to knock out the Brazilian and avenge his brother, but you need to gain normal condition and adjust the scope.

If the Russian hits well, he will drop the opponent.

But the same can be said about Antonio, because it is a heavy weight.

In my opinion, we will see a strange battle even from the point of view of morality and humanity, ”Shtyrkov emphasized.

At the same time, he urged doctors to carefully assess the condition of the Russian before the fight, so as not to risk his life.

“I repeat, it all depends on whether Alexander will be able to recover for the fight with Bigfoot.

Money is money, but if he does not return to normal in terms of the functioning of the brain and central nervous system, entering the cell will be deadly.

You know, it's a heavy weight.

Here, even for a healthy athlete, any blow threatens to be fatal, ”added Shtyrkov.

The athlete also recalled his own confrontation with Silva, which took place in 2016.

According to him, Bigfoot six years ago and now are different people.

“Then he just retired from the UFC and was in a completely different condition.

I think Antonio underestimated me or overestimated himself, which played a cruel joke on him.

But at the moment it is a completely different athlete.

Of course, when you are knocked out five times in seven years, this cannot but affect your health.

This is already a serious bell that it's time to finish, ”complained Shtyrkov.

In turn, the well-known promoter Vadim Finkelstein supported the fighter's point of view, but expressed confidence that the battle between Emelianenko and Silva would still arouse great interest in the country.

“People will fall for the names: “Oh, look, Emelianenko is fighting ...” Everyone knows and remembers them very well.

But we understand that it will be more about nostalgia, and not about a serious sporting event.

There will be fighters who use past merits to earn their last money.

Previously, they were in the top, but now they travel to different tournaments and suffer defeats.

Yes, Silva regularly falls into knockouts, but this, apparently, is his only source of income, therefore, he remains to perform while offers come in.

And the Brazilian’s fee is no longer as big as before, ”Finkelstein emphasized.

As for Emelianenko's problems with alcohol, the promoter expressed concern that Alexander would disrupt the fight and the organizers would take a serious risk until the last moment.

“Honestly, I’m tired of following him.

It's hard to figure out all his adventures.

Many really fear that Alexander in a duel with Silva or Datsik may receive irreparable damage to health, but rather we should talk about something else.

No matter how it turns out, he just won’t go into the cage.

This option is quite real if Sasha continues in the same spirit, ”added Finkelstein.