Sharjah needs 3 foreign players.. Too many changes will harm the stability of the team

Athletes confirmed that the Sharjah team is in a state of technical stability, after Romanian coach Cosmin succeeded in putting him on the right track by competing for championships and titles, and presented with him a distinguished level in the last league in the 2021-2022 season, stressing that the team does not need major changes in the ranks 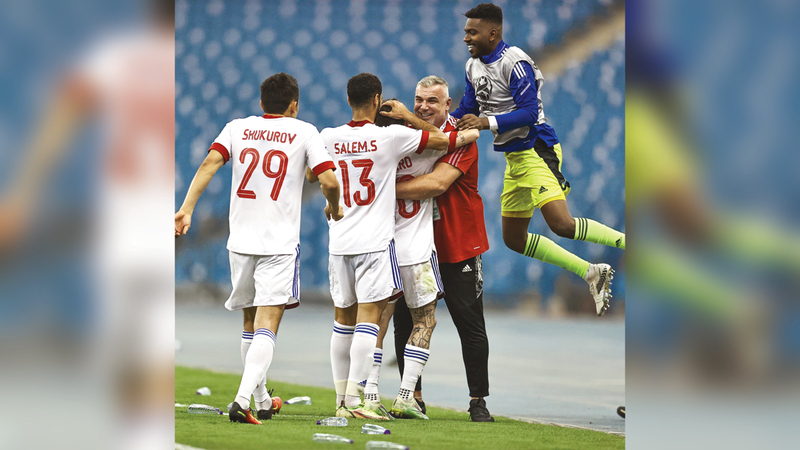 Athletes considered that Kuzmin put the "king" on the right track.. They affirm:

Sharjah needs 3 foreign players.. Too many changes will harm the stability of the team

Athletes confirmed that the Sharjah team is in a state of technical stability, after Romanian coach Cosmin succeeded in putting him on the right track by competing for championships and titles, and presented with him a distinguished level in the last league in the 2021-2022 season, stressing that the team does not need major changes in its ranks, but rather It only needs three foreign players, one of whom is in the back line, a playmaker and an outright striker, stressing that any many changes will harm the current stability of the team, pointing out that they expect Sharjah to be a strong competitor in the next season's league, as well as at the level of other tournaments. .

They added to "Emirates Today": "Sharjah presented a distinguished level in the ADNOC Professional League last season, and deservedly occupied the runner-up position in the Al Ain League, and was a strong contender for the title."

The former coach of Al Dhafra and Ajman, technical analyst, Abdel Wahab Abdel Qader, said that the technical level of Sharjah is stable, and that the team is in a state of continuous development from one match to another, considering that any major changes will harm the stability of the team, and the team may need a foreign player, considering that The resident player Gustavo Alex presented a high level in the line of defense, in addition to the presence of Shaheen Abdul Rahman, Salem Sultan, and Khaled Al Dhanhani as a distinguished player even with the national team, pointing out that most of the players were able to digest the team coach Cosmin’s method, indicating that the entry of two or three players will lead to A change in the whole system.

"The Brazilian team player Caio Lucas is an influential player and has skills, as well as the Uzbek Shukurov, who plays many roles, as well as Osman Kamara as a resident player, and the same is true for Marcos Meloni, and these constitute an additional strength for the team," he said.

Abdel Wahab confirmed that the team's player, Ben Malango, did not provide the desired level, and explained, "He was attracted as an outspoken striker, and we do not know the duration of his contract, is it two years or three?", considering that the club knows the matter in this regard.

Regarding the Brazilian player Bernard Duraty, Abdelwahab Abdelkader confirmed that the player, although he is physically active, the club can replace him with another alternative player.

He said: "Sharjah started playing as a unit, with a distinguished performance and organizational work, especially in terms of defense, which seemed cohesive in most matches, and the team was better than all the competitors who played against it."

Abdel-Wahab Abdel-Qader stressed that Cosmin focused on the defensive system, which gave the team weight and a defensive tendency, considering that even Cayo began to adapt and defend, unlike in the past, where he did not play defensive roles.

Abdul Wahab Abdul Qader considered that the Sharjah players in the resident category, Gustavo Alex, Marcos Millioni and Osman Kamara, are distinguished, considering that the team only needs to add one foreign player.

In turn, the former international player and legal advisor, Salem Hadid, confirmed that Sharjah has the capabilities that enable him to compete strongly, because he was a former champion of the league, and he was going well, but there were some negatives in the previous period, which caused the team's level to decline, before it regained His stature is with coach Kuzmin.

Salem Hadid added: "The team has the capabilities and players who can win the league title, but unfortunately the elements were not used well."

Salem Hadid saw that the team settled technically under the leadership of coach Cosmin, and the "king" began to appear as a competing team for championships, stressing at the same time that the team needs support in some centers.

In turn, the former coach of Dibba Al-Fujairah and Masafi, Muhammad Obaid Al-Khadim, confirmed that Sharjah, in its current state, does not need many changes in its ranks, but only needs two elements, one of which is an outspoken striker and the other a playmaker, considering that Romanian coach Cosmin knows how to attract players who serve the team. They also serve him as a coach.

Muhammad Obaid Al-Khadim expected that Sharjah will be a strong competitor for the championships next season, based on the advanced level that he presented last season under the leadership of Cosmin.