China Diving World Championships won 2 more golds, and the 100 gold achievement is about to be achieved!

China News Service Client, Beijing, June 29 (Reporter Wang Hao) From the evening of the 28th to the early morning of the 29th, Beijing time, the 19th World Swimming Championships continued in Budapest. In the men's diving three-meter springboard final, Chinese players Wang Zongyuan and Cao Yuan won the championship and runner-up, while the men's double 10-meter platform champion was won by the C 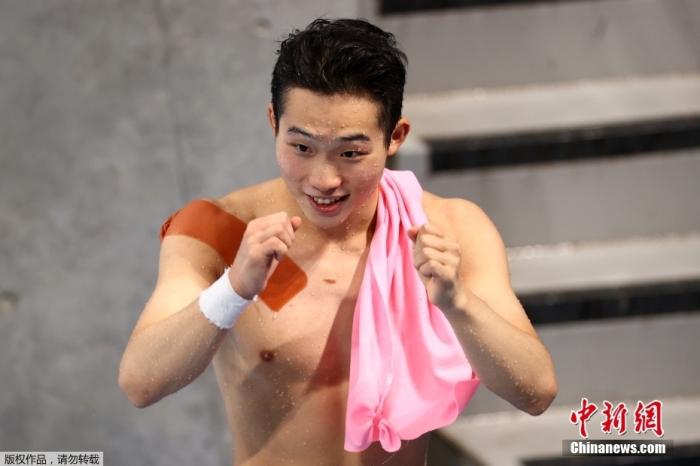 China News Service Client, Beijing, June 29 (Reporter Wang Hao) From the evening of the 28th to the early morning of the 29th, Beijing time, the 19th World Swimming Championships continued in Budapest.

Data map: Wang Zongyuan is in the game.

The Chinese diving team's gold-winning momentum that day began in the men's diving three-meter springboard final. Wang Zongyuan's performance was perfect, winning the gold medal with a super high score of 561.95 points, and his teammate Cao Yuan won the silver medal with 492.85 points.

In the men's double 10-meter platform final, the Chinese team Lian Junjie/Yang Hao obviously came out on top and won the championship with a score of 467.79 points. The third and fourth golds came naturally.

The audience who accompanied the diving team through the "Budapest Time" naturally praised the performance of the Chinese players. "Stable", "ruthless" and "crushing" have become the key words of the Chinese team in this World Championships.

In the 17-man roster of the Chinese diving team in this competition, newcomers account for a large proportion, and some pairs of events have a combination of "old and new".

Despite this, the Chinese team, which has alternated between old and new, continued to perform strongly in the World Series, worthy of the title of "Dream Team".

In the men's double 10-meter platform competition, a figure on the sidelines attracted the attention of many spectators. She was Chen Ruolin.

As the 5th gold king of the Olympic Games, Chen Ruolin has now become the coach of the national team, mainly coaching men's and women's platform diving.

Among them, Quan Hongchan, who became famous due to her outstanding performance in the Tokyo Olympics, is the disciple of Chen Ruolin.

At this World Championships, Quan Hongchan, who was facing the developmental stage, had some ups and downs. She made a mistake in the third jump in the women's 10-meter platform final, and finally lost to her teammate Chen Yuxi with a 0.3 disadvantage and finished runner-up.

In the women's 10-meter platform final at the Tokyo Olympics, Quan Hongchan, who was only 14 years old at the time, jumped out of full marks three times in the competition and won the gold medal with her excellent performance.

Beside Quan Hongchan, Chen Ruolin can always be seen, her comfort, encouragement and guidance have always accompanied Quan Hongchan.

After she regretted missing the championship in the finals, Chen Ruolin hugged Quan Hongchan to soothe her emotions, analyzed her gains and losses, and patted her on the shoulder encouragingly from time to time.

As one of the best athletes in the history of platform jumping, Chen Ruolin is helping her juniors overcome the biggest challenges of their careers.

This competition is the highest international competition for the Chinese diving team after entering the Paris Olympic cycle.

During the transition period of the two Olympic Games, the Chinese team hopes to complete the renewal of the team through the experience of the competition.

The Chinese diving team has won a total of 95 world championships since its first participation in the World Championships in 1982, ranking first in the gold medal list and medal list.

The achievement of results is not easy. Behind the numbers are the boring training and unexpected injuries of the players day after day.

After winning 4 golds in Budapest, the Chinese diving team's number of gold medals at the World Championships reached 99.

On the evening of the 29th, Beijing time, the Chinese team will hit the 100th gold in the mixed all-around diving competition.

Looking forward to more exciting performances from the "Dream Team"!