Fortunately Nichushkin: how a controversial goal helped Colorado win in Tampa and win the Stanley Cup

Colorado defeated Tampa Bay in the sixth game of the series and won the Stanley Cup for the third time in history. The meeting at the Amali Arena ended with a score of 2: 1, and Artturi Lehkonen became the author of the winning goal. At the same time, the Finn's accurate throw was preceded by a controversial episode, during which the hosts' hockey player Pierre-Edouard Bellmare ended up on the ice after contact with Josh Manson. Also, the confrontation was remembered for 28 saves by Andrei Vasilevsky and unrealized moments by Nikita Kucherov. 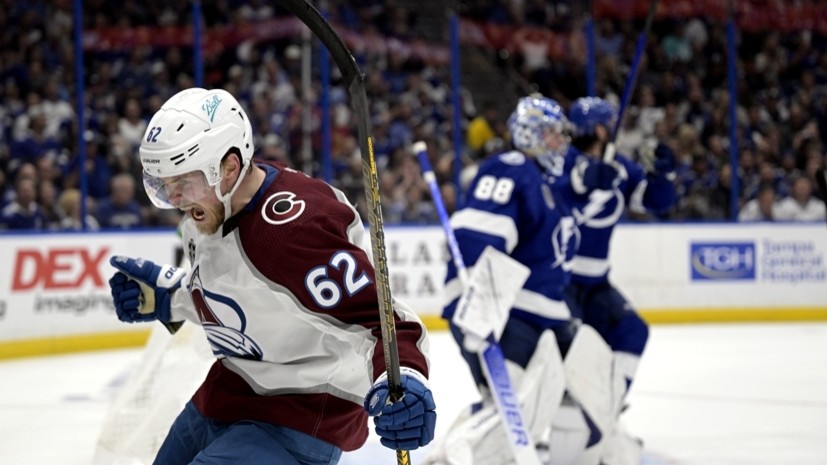 In the entire history of the Stanley Cup finals, only six teams managed to bounce back from 1-3 in the series and bring the matter to the decisive seventh meeting.

The last time Edmonton did this was in 2006, when they managed to restore parity in the confrontation with the Carolinas.

And in order to stand on a par with him, Tampa Bay needed to confirm the status of the best playoff team in terms of performances at home and take the upper hand at the Amalie Arena for the ninth time.

And although it was Colorado that held the lead in the number of away wins (8-1), there were prerequisites for this.

Two days ago, the Lightning turned out to be stronger away.

And that success helped the players keep their chances of winning a third trophy in a row and, perhaps, robbed their opponents of self-confidence.

Avalanche mentor Jared Bednar hinted at this in part.

He admitted that some of his charges are experiencing stress and anxiety - not the best sign before one of the key battles for the Stanley Cup.

And all this could well have intensified due to health problems with Valery Nichushkin.

The best sniper of the team in the final limped heavily before the morning roll-out, and the coach could not guarantee his appearance on the ice.

In turn, “Tampa” again could not count on Braden Point, but this is no longer news.

The striker was injured in the series against Toronto and partially recovered only by the start of the decisive round, but quickly returned to the hospital.

After that, one could safely put an end to the chances of him helping partners in the series with Colorado.

In the absence of Point, increased responsibility fell on the Russian stars of Tampa - Andrey Vasilevsky and Nikita Kucherov, who have repeatedly shown leadership qualities at critical moments.

Since 2020, the goalkeeper has not conceded more than two goals in matches in which the loss threatened the team with relegation, and his reliability ratio was an incredible 95%.

Among the active hockey players, no one else recruited.

And it was thanks to the efforts of Kucherov that the hosts took the lead already in the fourth minute.

Nikita received a pass on the right edge and drove through the gate, where he encountered fierce resistance from Nathan McKinnon.

The Canadian clung to the Russian, who, although he could not stand on his feet, still did not allow his opponent to throw the puck out of the zone.

Ondřej Palat, who came to the rescue, passed it to Steven Stamkos with his skate, and the captain had no problem dealing with Darcy Kemper.

Everything seemed to be perfect for Tampa.

Wards Cooper scored an early goal and almost sent the second after him, and Vasilevsky acted beyond praise.

All the same McKinnon threw twice in one attack, Nazem Kadri attacked at close range, but the goalkeeper was relentlessly moving towards a new personal record for the number of saves in the playoffs.

But at the beginning of the second period, even the current owner of the Conn Smythe Trophy could not help his partners in any way.

The second link of the hosts took to the ice against the leading three rivals reinforced by Gabriel Landeskog and could not withstand their pressure.

The guests literally brought in opponents in their own zone, and ended with a powerful click by McKinnon.

The Canadian remained uncovered in the face-off circle and slammed the puck into the near corner from close range.

Vasilevsky did not have time to move and only slightly touched the projectile with the tip of the pancake.

After that, the advantage of Avalanche only increased.

The Lightning lost control of the game and again allowed their opponents to surpass themselves in the number of shots on target (9:13).

At the same time, the difference could have been even greater if it were not for the dedication of the Floridians, who blocked eight attempts at once.

Josh Manson tried to deal with Vasilevsky in close combat, Artturi Lehkonen attacked from a lethal position, and Bowen Bayram almost took advantage of a pass from Nichushkin, who played through pain, but landed in the frame.

Nevertheless, even before the end of the period, the guests took the lead.

And again not without scandal.

In the 33rd minute, Colorado organized a three-on-two counterattack, which Lehkonen completed with an accurate throw.

It became possible thanks not only to the chic transfer of Mikko Rantanen from his third of the site, but also to the controversial actions of Manson.

When leaving the zone, he hooked Pierre-Edouard Bellmare with a stick, after which he fell on the ice, but the judges did not determine the violation of the rules.

Subsequently, the defender beat McKinnon and chalked up an assist.

Patrick Maroon reacted most aggressively to what happened.

First, he pushed Manson, and then hit him with a club on the leg and almost provoked a conflict between the teams.

The American miraculously did not receive a two-minute penalty, and a mass brawl was avoided, but the Tampa hockey players could no longer be reassured.

Until the end of the period, they played a couple of deletions, but the judges were silent.

At first, Ryan McDonagh was not sent to the bench for a rough power reception on Darren Helm, and then they did not respond to Stamkos' behavior.

After stopping the game, the captain of the hosts launched the puck at one of the referees, but managed to apologize.

In the third period, the Lightning only needed to upset Kemper once to restore parity and at least bring the match to overtime.

But they did not manage to come to their senses and calm down.

The hosts smeared from advantageous positions and in the first half of the period they never disturbed the goalkeeper of the guests, but in general they hit the target only four times in 20 minutes.

And this is when a third consecutive Stanley Cup victory was in jeopardy.

This segment was the most disappointing for Kucherov.

He was again very useful and led his partners, but he experienced enormous problems with the implementation.

First, Nikita missed from the most advantageous position in the moment with a two-on-one exit, and then he didn’t throw very well from the face-off circle: the corner was open, but the puck flew exactly at Kemper.

Vasilevsky tried with all his might to save the team a chance to win.

During the period, he scored another couple of bright rescues: he did not allow the overactive McKinnon to score a third point in the match, and twice prevented Nichushkin from distinguishing himself.

Andrei confirmed his class and once again conceded no more than two goals in a key meeting and along the way set a personal record for the number of saves in the playoffs.

But it was all in vain.

“Colorado” on the road took over “Tampa” and won the Stanley Cup for the second time in the 21st century.

At the same time, the Avalanche became the first team in history not to lose a single final.

In 1996, they defeated Florida, and five years later, in seven meetings, they broke the resistance of New Jersey.

The best hockey player in the playoffs, as expected, was named Cale Makar.