On the way to his fourteenth title at Roland Garros, Rafael Nadal slipped a disturbing speech after each game. He wasn't going to talk during the tournament about how he was treating the... 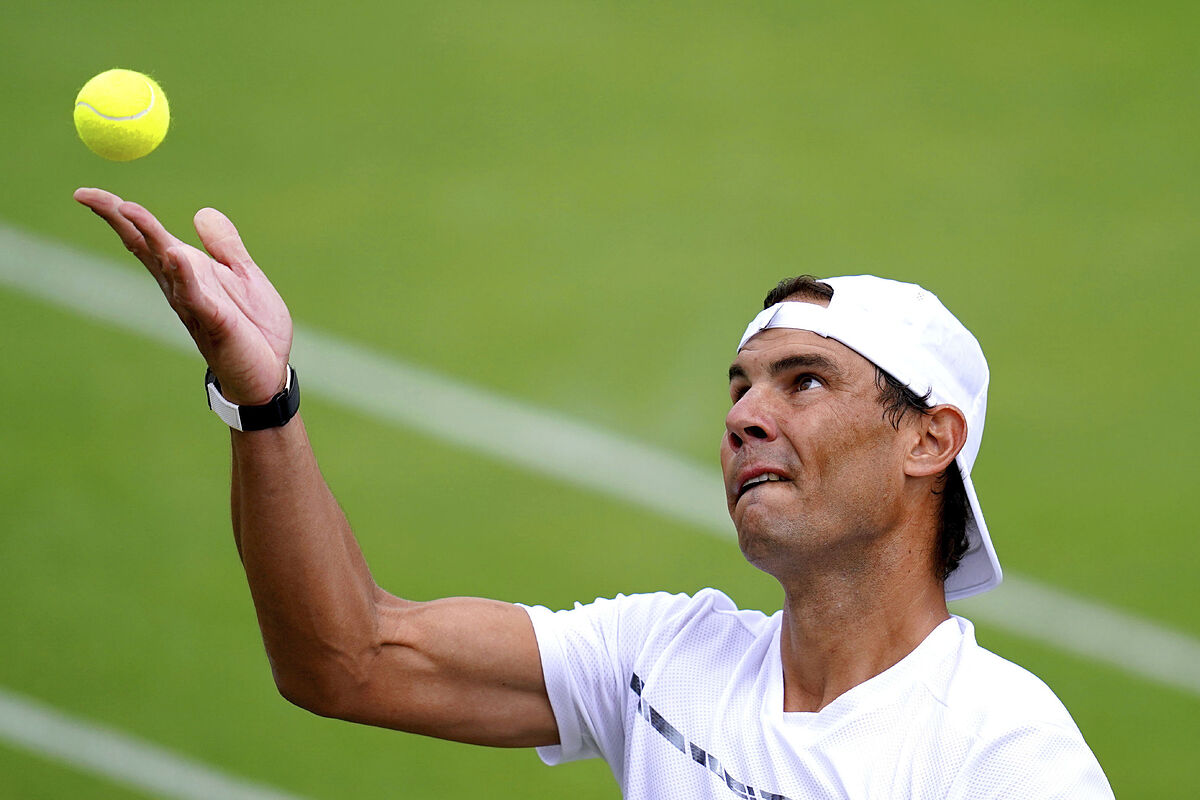 On the way to his fourteenth title at Roland Garros, Rafael Nadal slipped a disturbing speech after each game.

He was not going to speak during the tournament about how he was treating the chronic injury to the scaphoid in his left foot, he would only do so when it was over, at which time he would clarify his future, but, according to his comments, there were reasons to turn on the long lights, who knows if even the emergency ones.

The confusion reached such a point that on the same morning of the final, on the 5th, a rumor circulated, verbalized through Radio Montecarlo, that he had invited Federer to attend what would be his last match, in addition to reserving the conference room where he would announce his retirement from tennis the next day.

Twenty days later, after successfully undergoing radiofrequency treatment on the nerves in his left foot that prevents infiltration before each match,

Nadal is ready to return to Wimbledon, three years after losing in the semi-finals to Roger Federer

Absent in 2021 as a result of the recurrent injury and without the possibility of playing in 2020 when the tournament was canceled due to the covid pandemic, the also winner of the Australian Open this season returns to the grass where he was champion in 2008 and 2010.

"I can walk normally every day, when I wake up I don't have that pain that I had for a year and a half. In training in general I have been better. In the last few weeks I haven't had one of these days that hurts terrible. In general , I am positive

, he commented this Saturday at the press conference prior to the tournament.

"We are improving. There are still days left. We are in the normal line of the last occasions in which we have come here without competing on the surface. They have been two games that are not 100% serious, but that have something more than training. try to assimilate concepts and deal with situations that you later find yourself in during the tournament. The foot responds well," Francis Roig, who, as is traditional, will act as coach at the All England Club, tells us in a telephone conversation with this newspaper from London.

The two Hurlingham pins have resulted in victory against

The last time the Spaniard played a grass-court tournament prior to Wimbledon was in 2015, when he fell in the first round at Queen's against

, defending champion and six-time champion, tend not to compete between Roland Garros and Wimbledon, guided by their proven ability to transition from one surface to the other and by what their already extensive tour experience suggests.

"It's early to look at the table. If we reach the level we want, the rounds will be less difficult, but if we play badly, any game can get complicated," continues Roig.

"There's still a bit of everything missing: fine-tuning the serve, the return and the backhand, knowing how to hit a straight forehand, in such a way that it will do damage, and interpreting the bounce a little better."

Here you have to have more names, with the specialists on the surface, who can surprise you more than a 'top ten'

The dialogue with Roig becomes a pleasant lesson on the praxis of tennis on grass.

"An easy ball is not hit in the same way as on clay or on cement; not because it hits with greater force it will run more. The supports are also different. You have to try to make the ball run not only with the

but with all the movement from down, from the legs".

Nadal arrives in London with more certainties than he offered in

, where he appeared after being involved in serious physical problems and very short of kilometers on the track.

His two titles, in particular the one obtained in Melbourne, were the result of the resounding expression of the DNA that has distinguished him from the beginning.

It had been 13 years since his only title in Melbourne.

It's been 12 since he got second at Wimbledon.

"In 2018 he lost to Djokovic in the semi-finals after a great game whose winner had a good chance of taking the title, given that

[the other finalist] was also coming off a very long match. I wanted to play here and if we get closer to the desired level will have its options", comments Roig.

In addition to the two titles, Nadal has played in three other finals, 2006 and 2007 against Federer and 2011 against Djokovic.

since he lost last year to Djokovic in the semifinals at Roland Garros, he has 14 consecutive wins.

He circulates in the lower part of the draw and would not face Djokovic until a hypothetical final.

He will debut on Tuesday against Argentine

The greatest demands would come, always on paper, in a quarter against

and a semifinal against

, finalist in 2021 and recent champion in Stuttgart and Queen's, or

, which won its first title on this surface in Palma de Mallorca.

"On grass there are more players outside the

that can surprise you. However, the best ranked can create more problems for Rafa on cement than on grass. Here you have to have more names, with specialists, people like

, which don't have the pedigree of

standouts , but can be more dangerous."

When it comes to handing out the biggest rewards, Wimbledon has, however, been the most selective of the Big Four.

Since 2003, the year in which Federer won the first of his eight titles, only four players have lifted the cup: Djokovic did it six times, Murray twice and Nadal the other two already mentioned.

We are dealing with a different player from then, who has experienced a constant evolution since he entered the tournament for the first time, in 2003, when he fell in the third round against the Thai

"It was a necessity. We are the age we are and we have had the injuries we have had. You cannot face a match with such a physical load. And less so in Grand Slam tournaments, which are very long," explains his main mentor in London. .

After the recent victory in Paris, Nadal himself admitted that he no longer performed as a specialist on clay.

It was the Roland Garros where he showed his most aggressive vein, with performances full of strength and dynamism, such as the one starring in the quarterfinals against Djokovic.

All this can be considered work in advance when landing on the grass.

More edge on the back

"One of the peculiarities in the latest editions of Roland Garros is the way of entering the court with the backhand, not only with the forehand, which has always been and will be his hit, but also with a backhand that does a lot of damage and takes up time to the rival. Also with the

, going forward. He has a more complete game. What he needs today is what he is doing and for the grass, obviously, he has to help him", Roig subscribes.

I can walk every day.

It will be a Wimbledon without Russians or Belarusians, by unilateral decision of the tournament, which has decided to veto them due to Russia's invasion of Ukraine.

It will not be, among others,

Another sensitive casualty, in this case due to torn ligaments in his right ankle suffered in the Roland Garros semifinals against Nadal, is that of

, second in the rankings.

Nor will there be points in the ranking, as the ATP (Association of Professional Tennis Players) disagrees with the punishment imposed on Russians and Belarusians.

49 million dollars will be distributed in prizes, 11% more than in the last edition.

Less cartel, but more money than ever.