China News Service, Hulunbuir, June 25th Telegram: Deciphering China's "Hometown of Hockey": Inheriting the Millennium Court Sports   Author Zhang Wei Jiang Xiwu   Bumping the ball, scrambling, spinning with the ball... In the early morning, a round of red sun spewed out from the edge of the Nenjiang River. On the lawn, a group of children were practicing hockey against the rising sun.   In t 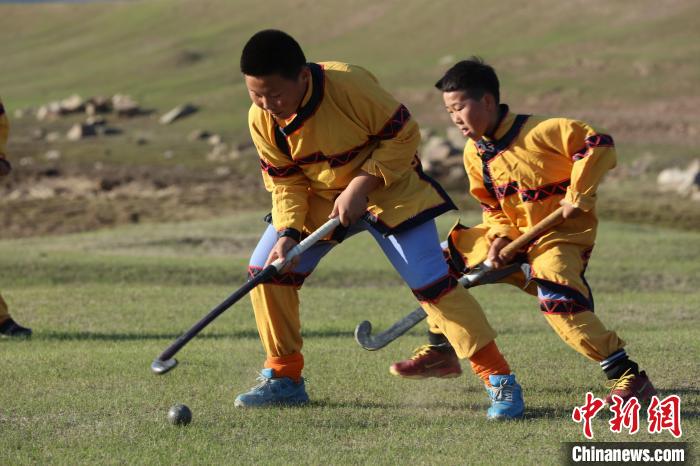 Bumping the ball, scrambling, spinning with the ball... In the early morning, a round of red sun spewed out from the edge of the Nenjiang River. On the lawn, a group of children were practicing hockey against the rising sun.

In the just-concluded Moli Dawa Daur Autonomous Flag hockey base point school competition, the number of participants reached 461, an increase of 200 compared to 2021.

The Moli Dawa Daur Autonomous Banner (hereinafter referred to as the Mo Banner) in Hulunbuir City, Inner Mongolia Autonomous Region is known as the "Hometown of Hockey" in China, and has created the glory of "one autonomous banner, half a national team".

The picture shows the daily practice of hockey players.

According to historical records, hockey was deduced from the step-by-step game of the Tang Dynasty court, and then declined with the passage of time. However, the Daur ethnic group, a relatively small ethnic group in the north, has preserved this game well.

In 1976, my country's first men's hockey team was established in Moqi. At that time, Ewen, who was only 8 years old, lived close to the training ground with his family. Whenever he was free, he would go to see the athletes practice. When the athletes were resting, He will love to pick up the club a few gestures.

In 1988, an accidental opportunity brought E Wenju back to the place where his dream began. He became a member of the Ningxia Yinchuan hockey team; in 2005, E Wenju retired and returned to his hometown Moqi Sports Center to work; two years later, He served as the team leader of the Inner Mongolia men's hockey team.

"Eat and live in the team, I worked together with the athletes, fought in the north and south, and participated in more than 40 games in two years." E Wenju truly experienced "pain and happiness", "Being the team leader , and as a goalkeeper and coach, in one year, he lost more than 20 kilograms."

In 1979, hockey was incorporated into the content of physical education in local schools, and 7 hockey training base schools were established in ethnic towns and towns. In 2010, the number of hockey training schools grew to 17, with more than 200 children and adolescents training amateurs.

Meng Jun, who is now the director of the hockey office at Moqi Secondary Vocational and Technical School, never imagined that he was once a young boy who played hockey in yellow rubber shoes in a small mountain village, and that he would even have the opportunity to step into the gate of the national team.

In 2017, the Moqi hockey team represented the national team and won a ticket for China to the 2018 India World Cup Men's Hockey Tournament.

Meng Lizhi began to participate in professional hockey training at the age of 14. He has successively entered the Inner Mongolia men's hockey team, the national youth team, and the national team. He has participated in 5 National Games, and is known as the "evergreen tree in the music world".

The picture shows the coach explaining the essentials to the hockey players.

16-year-old Guo Hao is a rural child from Arla Town, the "hometown of hockey". His current coach is Meng Jun.

Guo Hao's dream is to become a member of the national hockey team.

"The third grade of primary school began to enter the school team. Now, I am now a main player of the hockey team of the Moqi Vocational Education and Training Center."

In 2006, the "hockey sports" of the Daur nationality was selected into the first batch of national intangible cultural heritage list.

Over the years, Moqi has sent more than 100 male and female hockey players to Gansu, Guangdong, Shandong, Sichuan, Tianjin and other provinces and cities.

Now Moqi has more than 20 professional hockey venues, and in 2018, the only closed hockey training and competition venue in China will be built.

At present, Moqi has formed a four-level training network for professional teams, youth teams, amateur sports schools, and base schools.

Hasson, 76, the first female hockey coach, has dedicated her life to her beloved game of hockey.

"It's gratifying to see more and more teenagers playing hockey now. I believe the game of hockey will have a better tomorrow."

Flower beds, street lamps, urban sculptures... Nowadays, in Moqi, elements related to the shape of hockey can be seen everywhere, and this sport has been deeply engraved in every corner of this small town.