Watch.. the 10 best dribblers in the history of football

Some of the football stars' mastery of dribbling and technical tactics is one of the main sources of entertainment for football fans. The skillful dribble also has magic solutions to settle matches and elicit the fans' groans. 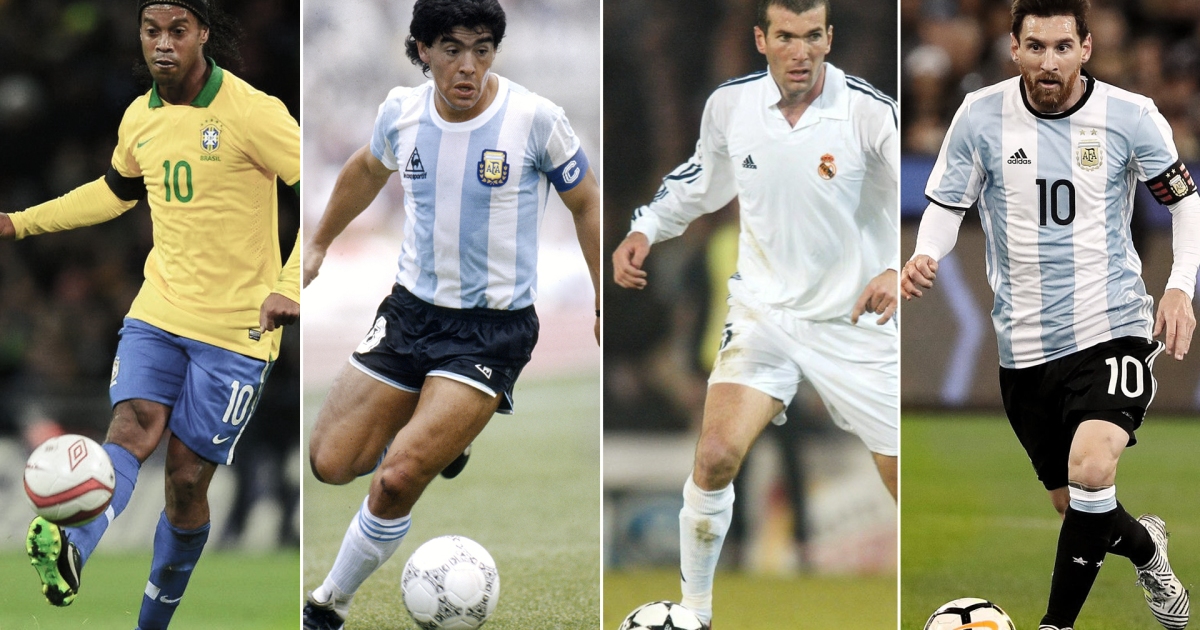 Some soccer stars have mastered dribbling and technical tactics;

One of the main sources of entertainment for the football fans.

The skillful dodger has magical solutions to decide matches, whether by scoring goals and extracting the fans' groans, which adds a kind of beauty and excitement to the match.

In this report, the French "Les 10 meilleurs" website reviews the best dribblers in football through the ages, from Briton Stanley to Ronaldinho and Garrincia, to Messi;

What these players have in common is their mastery of a range of tactics that help them dodge all defenders.

Sir Stanley Matthews - one of the greatest players in British football - is considered the first and best dribbler in the history of football, so he was called the "dribbling wizard". All defenders.

Matthews' career in the world of football - which was crowned with many awards and titles - spanned about 30 years.

At the age of 48, Matthews was named the best player of the season in England;

The dribbling magician spent his entire career with Stoke City and Blackpool.

#OnThisDay in 1915, Stanley Matthews was born in Hanley, Stoke-on-Trent.

Here's The Wizard of the Dribble, on This Is Your Life in 1956, making Eamonn Andrew's look absolutely rubbish.

Matthews is still ranked among the top 10 players in England football history.

In his 23-year international career;

Matthews played 52 caps and scored 11 goals, not to mention being the first winner of the 1956 Ballon d'Or.

An exceptional player being included in the top 10 scorers list, and one of the best dribblers in the history of football.

Pele, who became famous all over the world, is considered the greatest player of the 20th century.

Thanks to his presence in the squad of the Brazilian national football team - known as the Seleção - the team won the World Cup 3 times.

Football has not known another player to match Pele's performance.

For the Brazilian fans, "Pelé" is a true hero. He was famous for his rare technical skills, as he spent 18 years of his career in this field with Santos Football Club, which was crowned with many titles including 6 Brazilian championships, and twice won the Copa Championship. Libertadores and twice the Intercontinental Cup.

George best was a different gravy🔴🔥pic.twitter.com/dKoE1DEFi1

George Best is one of the most famous British players of the 20th century. His unique talent, vitality and tactics helped him gain popularity and be considered one of the best dodgers of his time.

Best spent most of his career in this field with Manchester United, and is credited with winning the "Red Devils" two championships;

One of them was the European Champions League in 1968. In addition;

Best is the best player Northern Ireland has produced after he was crowned the tournament's top scorer in 1968 and won the Golden Ball award.

Who remembers when @Ronaldo scored 14 seconds after kick-off in the Madrid derby?🤔#LaLigaTV |

"Ronaldo Luis Nazario de Lima" is included in the list of the greatest strikers in the history of football, thanks to his possession of a number of qualities, on top of which is speed, vitality and his ability to move in small spaces, as well as the technical skills that made him an opponent for any defender.

Ronaldo was an excellent scorer, and ranked second in the ranking of the best strikers in the history of football.

R9 was something special.

He played with many major European clubs, including Barcelona, ​​Inter Milan and Real Madrid.

Thanks to his presence in the squad of FC Barcelona and Inter, the two teams won the European Champions League.

With the Brazilian national team, Ronaldo won his best title in 1998, while in 2002 he was considered the tournament's top scorer.

One of the greatest performances of all time 🤩

Zinedine Zidane is one of the greatest players in the history of football.

Zizou - as he is nicknamed - is a high-level playmaker, and has always been an essential element in all the teams he played in, especially thanks to the talent he possesses in perfect passes. A favorite known as "roulette" or a roll.

The elegance of Zizou 🎨#UCL pic.twitter.com/tk4bHaz3xX

Zidane, who played with Cannes and Bordeaux before joining Juventus, won two Italian championships with the black and white "Bianconeri", and reached the Champions League final twice without winning them.

In the final, he scored one of the best goals of his career.

Zidane was also decisive with the French national team;

He achieved great success throughout the 1998 World Cup, scoring two goals in the final against Brazil;

What made "Le Bleu" (the French national team title) a world champion.

He also contributed mainly to France winning the Euro 2000 championship two years later, winning the Golden Ball in 1998, in addition to occupying first place in the ranking of the best French players in history.

When Ronaldinho came up against Sergio Ramos…👋🇧🇷pic.twitter.com/opLNjKsQnd

Ronaldinho - whose full name is Ronaldo de Assis Moreira - is one of the best dodgers of his era, and he was a skillful player who could not predict what he would do with the ball, which made the defenders' task of observing him very difficult;

Where his speed and many evasions enabled him to deal with all situations.

Ronaldinho exists to remind everyone that, above everything else, football is supposed to be fun.

During his career, Ronaldinho played with many big clubs, including Paris Saint-Germain, Milan and Barcelona, ​​with whom he witnessed his best seasons, winning the Spanish League twice and the European Champions League with him.

The applause of Real Madrid fans - their traditional rivals - remains at the Bernabeu during the El Clasico match;

Beautiful memory of his career.

Rooney also has a career with the Brazilian national team that spanned over 14 years, during which he played 97 matches and scored 33 goals, and was one of the main players in Brazil's victory in the 2002 World Cup, and he also won the Golden Ball in 2005.

@FCBarcelona beat (0-5) Real Madrid at Santiago Bernabéu Stadium and ended up winning La Liga for the first time since 1960.

Johan Cruyff is undoubtedly the most famous Dutch player in history;

Where he is the legend of Ajax Amsterdam and Barcelona;

One of the best dodgers of all time.

He was known for his strong performance in terms of physical fitness, as well as for his high level of skill, and he was able to implement camouflage and evasions with great ease.

🕊 Today would have been @JohanCruyff's 75th birthday

1️⃣4️⃣ Always in our memory pic.twitter.com/yR7sT66qlp

Cruyff was formed in the Ajax team, and began his professional career with him, winning 8 Dutch championships and the European Champions League 3 times in a row between 1971 and 1973, then he moved to Barcelona, ​​where he spent 5 years.

Cruyff played 48 games, scored 33 goals with the Dutch national team, and starred with him in particular during the 1974 World Cup, where he reached the final and lost to Germany.

The legend that is @JohanCruyff introduced the world to the Cruyff Turn against Sweden in Dortmund.

Diego Armando Maradona is one of the 3 best dribblers in the world.

There is no follower of football without hearing about Maradona, as his dribbling, especially his physical camouflage, allowed him to penetrate any defense.

In addition to his high technical level;

Maradona was also quick and good at finishing, as evidenced by his many goals.

Maradona won the first title in his career with the Boca Juniors team when he crowned the Argentine league, and then joined the Barcelona team, who spent two seasons with him, before his career became known as a major turning point by his move to Italy from the Napoli club gate;

Where he became the most famous player in the world and loved by all the inhabitants of the city of Naples.

A Diego Maradona moment that will not be forgotten till time exists.

Maradona enabled Napoli to win its first Italian league title in 1987, followed by a second title in 1990, and led it to winning the Italian Cup and the European Football Association Cup in 1989.

In addition to Messi, Maradona is one of the best players in the history of the Argentine national team. Thanks to his superior dribbling skills, he scored and assisted many decisive goals that led his country to a deserved victory in the 1986 World Cup in Mexico.

During this tournament, he was named the best player in the World Cup, and everyone still remembers his amazing goal in the quarter-final against England;

Where he dribbled almost half of the English team with a run from his half and then outperformed the entire opponent's defense with the goalkeeper alone before breaking his net, and he was then ranked the greatest player in the world.

└📁 Things you love to see

The most worthy player to succeed Maradona is Lionel Messi, who has the innate talent for dribbling this segment of players.

But Messi's lifestyle is much better than Maradona's because he is still an undisputed player on the pitch even at the age of 34;

Messi's unparalleled agility and speed allow him to surprise even the best defenders with his masterful dribbling and dribbling technique.

Lionel Messi remained loyal to Barcelona throughout his career almost. In 16 seasons with the Blaugrana, he won a large number of titles and contributed to the brightness of the club's star in the world of football.

Since the beginning of his first season in 2004, Barcelona has won the Spanish League 10 times, the King's Cup 7 times, and the Champions League 4 times, and Messi is also the club's top scorer ever, with 672 goals in 778 games.

Messi remains one of the best Argentine players in history, his immense talent has allowed him to amass an enormous fortune and be one of the 10 richest athletes in the world, and he is the only player to win the Ballon d'Or 7 times throughout his career.

Many see Garrincha as the greatest dribbler in football history;

His quirks and artistic moves made him very entertaining.

On the field, Garrincha can easily outsmart any opponent and thwart his defensive efforts.

Although the Brazilian has spent most of his career at FC Botafogo in his home country, Garrincha is best known for his international exploits, as he is also one of the best Brazilian players in history.

He excelled by providing several assists during the 1958 World Cup, which Brazil won.

And after 4 years in the 1962 World Cup, he would have had his best tournament.

After Pele was injured;

It was Garrincha who led his team to victory thanks to his superb dribbling technique and several crucial goals.