Beating champions: Nichushkin scored a double and helped Colorado defeat Tampa in the second match of the Stanley Cup Finals

Valery Nichushkin was recognized as the main star of the second match of the Stanley Cup final between Colorado and Tampa Bay. The Russian striker scored a double and helped the hosts win one of the biggest wins with a dry score in the history of the NHL playoffs. In turn, the guests made only 16 shots on the opponent's goal in three periods, and Andrei Vasilevsky set a personal anti-record. 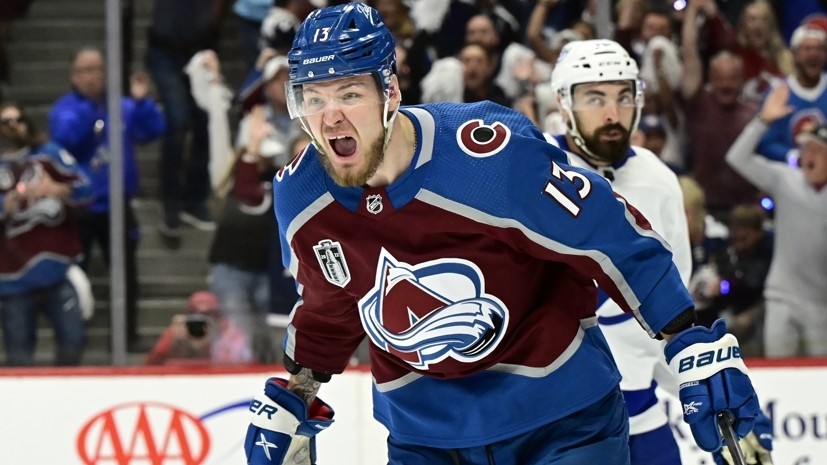 In the course of the current Stanley Cup season, Tampa Bay has accustomed its fans to the fact that it performs extremely unsuccessfully at the start of the series.

On the way to the finals, the current trophy holders lost to Toronto and Rangers in the first matches, and they were only able to get the better of Florida, which was eventually defeated 4-0.

They did not succeed in the decisive round either, albeit in a bitter struggle, but lost to Colorado.

The hosts acted much more aggressively in attack and transferred the guests more than one and a half times (38:23).

Under such an onslaught, even the magnificent Andrei Vasilevsky could not stand it.

First, for the first time in his career, he missed three goals in the first period, and then he could not prevent Andre Burakovsky from scoring in overtime.

As a result, even the Lightning coach John Cooper himself admitted that his wards had an unsuccessful first meeting, and expected progress in the second.

And there were reasons for this.

In their history, the Floridians suffered defeat three times in the first match of the final, but each time they took a convincing revenge in the second.

And in two cases subsequently won the confrontation.

It was not possible to cope only with the Blackhawks, who were at the peak of their form.

In addition, Vasilevsky traditionally added in the course of the series.

In favor of "Tampa" and said the sudden problems of hockey players "Colorado".

If Burakowski did not attend only one Avalanche training session, then Gabriel Landeskog did not attend two, as a result of which his appearance on the ice was in question.

But it was he who became one of the main creators of the success of the hosts three days ago, chalking up a goal and an assist.

However, in the end, the fears of North American journalists turned out to be groundless.

Landeskog made it to the Colorado's first line, even though he didn't look as impressive as usual.

In total, the Swede spent more than 17 minutes on the ice, but was not marked by a single effective action.

But even this did not stop the hosts from scoring three unanswered goals in the starting period.

Moreover, the author of the first of them was Valery Nichushkin, who had previously managed to hit the gates of Vasilevsky.

The Russian appeared on the ice in the second special brigade of the majority and helped to realize the numerical advantage.

Tampa's defenders slept through the striker's dash for a nickel and allowed him to send the puck into the net.

Looking ahead, Nichushkin again performed brilliantly and was not only recognized as the first star of the match, but also proved that he is one of the most underestimated participants in the decisive round of the playoffs.

At the beginning of the second 20-minute period, he again opened right in front of the target and shot Vasilevsky with a well-aimed throw.

But if at the beginning of the first segment Burakovsky assisted him, then in the debut of the second - Mikko Rantanen.

This allowed Valery to become only the sixth hockey player in the last 32 years to score more than one point in the first two meetings of the final.

Before him, Ray Bourque, Rick Tocquet, Mario Lemieux, Justin Williams and Chris Kunitz have submitted to this bar.

By and large, by this time the outcome of the confrontation was a foregone conclusion.

In the first 25 minutes, the Lightning disturbed Darcy Kemper only five times and did not look like a team capable of fighting back from 0:4.

And so it happened.

By the end of the second period, the guests had only 11 hits on target, while the hosts managed to score the fifth goal.

Darren Helm punished the Floridians for the grossest mistake in the foreign zone.

The 35-year-old veteran made a solo pass and once again took Vasilevsky by surprise.

Replacing the discouraged goalkeeper seemed like a logical step, but Cooper stubbornly refused to release his replacement, Brian Elliott, on the ice.

As it turned out later, it did not end well either for the team or for the goalkeeper.

In the third period, Tampa Bay came out without any hope of a comeback and looked as inexpressive as possible.

In total, Nikita Kucherov and company only bothered Darcy Kemper five times, and this despite the fact that they had a numerical advantage twice.

But as in the previous four meetings, it was not possible to use it.

Moreover, the current champions also gave the opponents a chance to excel in a four-on-five game.

Another sawn-off shot ended with a counterattack, which Cale Makar implemented in cold blood.

The Colorado star guard scored the first goal in the Stanley Cup Finals, and seven and a half minutes later scored a double.

True, this time the Avalanche themselves were in the majority.

The Canadian completed a spectacular combination and helped Rantanen score an assistant hat-trick, and Vasilevsky, who played his 100th match in the playoffs, set a personal anti-record.

Previously, he had never missed seven times in a meeting.

One step away from this, Tampa Bay also stopped, having suffered one of the biggest defeats in the history of the Stanley Cup finals.

With a greater difference, only Minnesota was inferior, in 1991, losing to Pittsburgh with a score of 0: 8 in the sixth match that became the final in the series.

Then the legendary Lemieux scored a goal and three assists, who later received the award for the most valuable hockey player in the playoffs.

After the final whistle, both head coach John Cooper and captain Stephen Stamkos stood up for Vasilevsky.

And although the goalkeeper did not always look perfect, he certainly could not be blamed for the failure.

Andrei managed to rescue his partners several times in hopeless situations, and the vast majority of Avalanche's effective attacks arose due to the gross mistakes of the attackers and the irresponsible actions of the Lightning defenders.

In particular, the stellar Victor Hedman failed again, whose utility indicator was “-3”.

If things continue like this, Vasilevsky and Kucherov risk not only missing out on the Conn Smythe Trophy, but also the opportunity to help Tampa become a dynasty team.

Even if during the current draw of the tournament they have already played back from 0:2 in the series, it will be extremely difficult to do this in the final.

Then the Bruins were beaten twice on the road, but parity was restored in the home arena, and subsequently took over in seven games.

Perhaps a brawl that took place shortly before the final siren will have a positive effect on the Floridians.

Four hockey players from both sides took part in it at once, each of which received a double minor fine.

And among the removed was Nichushkin, who grappled with Eric Chernak.