5 names make the event in the European transfers... and the new Liverpool star is the biggest surprise

The summer transfer market for European football kicked off strongly with a very prominent event when the former Dortmund star, Norwegian Halland decided to play for Manchester City next season in a deal valued at 100 million euros, while it was not long before football fans in the world were preoccupied with the fate of the star player. 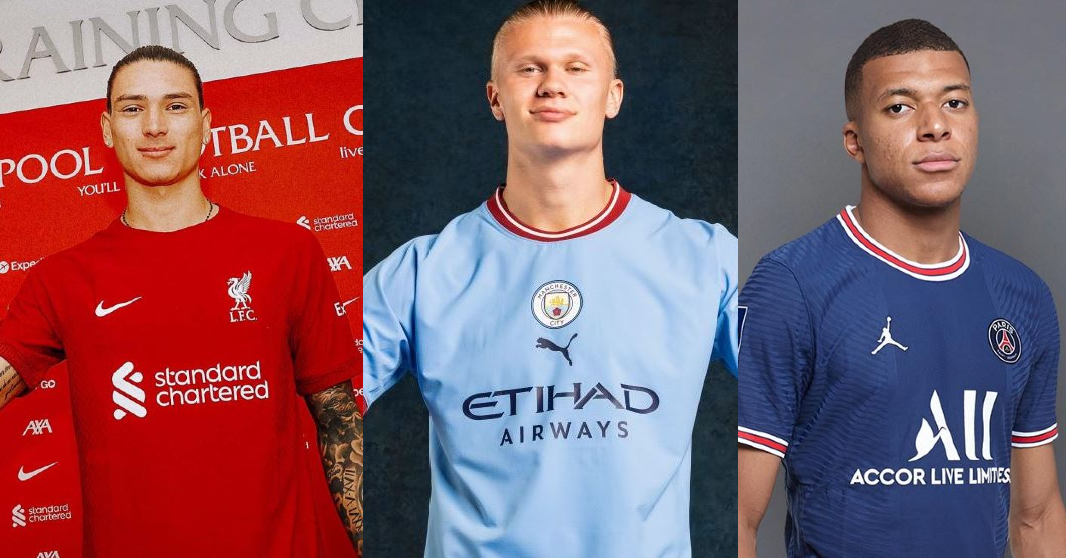 5 names make the event in the European transfers... and the new Liverpool star is the biggest surprise

The summer transfer market for European football kicked off strongly with a very prominent event when the former Dortmund star, Norwegian Halland decided to play for Manchester City next season in a deal estimated at 100 million euros, while it was not long before football fans in the world were preoccupied with the fate of French star Kylian Mbappe, who He changed his mind at the last minute and decided to stay with Saint-Germain with a new contract, as the deal is considered the most prominent and most financially expensive in Europe to date.

During the weeks that followed, other deals appeared, the most notable and most recent of which was the transfer of Uruguayan striker Darwin Nunez from Benfica to Liverpool for 100 million euros, which was considered a surprising deal for everyone, as it was completed in less than a week, and for the same value, Monaco French midfielder Chuamini to Real Madrid, The Royal Club also strengthened the defense with an important deal after the inclusion of German Antonio Rudiger in a free transfer deal.

1- Norwegian Halland .. The missing piece in the City attack

The Norwegian Halland (21 years old) is the piece that was missing from Manchester City coach, the Spanish Guardiola, to complete the offensive force next season.

And the English “Sky Sport” channel confirmed that Haaland’s transfer from Dortmund to City amounted to 100 million euros, including the value of the penalty clause, the agent’s bonuses and the privileges granted to the player and his former club, according to the contract.

Haaland's market value is 150 million euros, and he is considered the most prominent young striker in Europe with French Mbappe.

With a height of 1.95 meters, he is very fast, and a top-class goalscorer, as he scored 22 goals in 24 Bundesliga matches last season.

Haaland, Nunez and Chaumini are young stars, and their transfer cost the City, Liverpool and Real clubs 100 million euros per deal.

2- The French Killian Mbappe .. Paris’s bet in the

Champions , European media estimated his total value at about 300 million euros, not to mention other large revenues, after the club allowed him to control 100% of the proceeds from the exploitation of his commercial image.

By virtue of the new contract, Mbappe will become the highest paid in the world of football, with an annual salary of more than fifty million euros, free of taxes, as well as a bonus for signing a contract with a net amount of about 120 million euros, along with many bonuses, as well as multiple administrative authorities, as he has an important opinion in the club’s contracts and in Many other things have to do with rebuilding a strong team whose first goal is to win the Champions League.

Liverpool coach, German Jurgen Klopp, pressed hard in just days to decide the transfer of Portuguese striker and scorer Benfica, Uruguayan Darwin Nunez to the “Reds”, which took place after a week of negotiations in a deal that cost Liverpool towards 95 million euros, including bonuses, while the original value of the deal was estimated at 75 million euros.

Nunez is considered the best alternative for Klopp for Senegalese Sadio Mane, who is close to moving to Bayern Munich.

Nunez, 22, has a height of 1.87 meters, and scored 26 goals in 28 games with Benfica last season, a distinguished statistic that confirms his high scoring capabilities.

4- The French Chaumini .. The future of the middle of the

Chaumini is 22 years old, and is considered one of the most prominent emerging midfielders in Europe at the present time.

Chuamini is 1.88 meters in height and has great physical abilities. He also attracted the interest of major European clubs after a distinguished season with Monaco.

Despite the temptations of Paris Saint-Germain, but Chuamini made up his mind and decided to wear the Real Madrid shirt, in a deal amounting to 100 million euros with bonuses and additions, while the basic value of the deal amounted to 85 million euros.

5- German Rudiger.. Defensive experience in the service of Real Madrid

German Rudiger is considered the first “summer Mercato” deal for Real Madrid, as the royal club sought to include the player in a free transfer deal after the end of his contract with his former club Chelsea, and he will also be considered a major and important pillar of Real’s defense Especially after the departure of the Brazilian Marcelo, as a result of the repeated injuries suffered by a number of players, most notably the Spanish Carvajal, as well as the French Mendy.

Rudiger, 29, has extensive experience, whether with Chelsea or the German national team, and with Real Madrid he will receive an annual salary of 11 million euros, and his contract extends until 2026.