Marcelo's goodbye and the detail between tears with Raúl's "example": "I had never said it and I wanted to thank you" 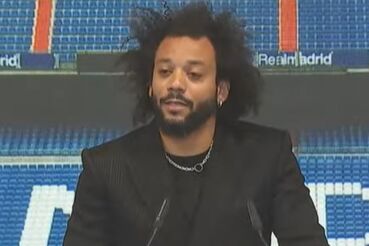 He debuted in the winter of

and leaves in the summer of

at the age of

that make him the player with the most titles in the history of Real Madrid.

This Monday, that teenager who set foot in the Spanish capital so long ago, said goodbye, although without saying "

"Let's see...", began the defender, visibly moved, from his first word at the altar that Madrid set up in the Ciudad Deportiva de

I've promised myself to speak normally

, now I'm getting over it...", he admitted unsuccessfully, before shedding tears again.

Sitting a few meters away, his wife

, his brother-in-law and friend

and the group of props with whom he has shared more than a decade and with whom He wanted to have a detail during his speech.

"The props are like family, thanks to all the workers, the security people,

those who work behind the scenes, those who do the dirty work

", he praised, unable to avoid crying. "We only dedicate ourselves to playing football, but for us to do it well there is a job behind and I learned that here.

Thanks to Madrid for this.

We have had everything to enjoy."

" of the last captain of the white team.

, fundamental for the team to achieve its successes. A player born to feed the myth of our club. You will forever be a great reference for all football fans, and for the boys and girls who adore you and they see you as an example. Thank you on behalf of this entire institution.

Real Madrid is and always will be your home

", the head of the Chamartín team had thanked him.

"Raúl, when I arrived you had a detail with me"

Marcelo, who admitted having woken up "every day with joy and pride that my children see that I have been able to achieve this, make history with the best club in the world, had a few words for

, present in the room and captain of the Madrid when the Brazilian landed at the Bernabéu. "Raúl, when I arrived

you had a very big detail with me , "he addressed the

When my son Enzo was born, you gave me a gift

with many things for the baby and I you gave a lot of advice.

You were always very loving, you and your family.

I will never forget.

From there I began to

see you as an example

I have had a very strong example that has been you.

I have never said it

and I wanted to thank you in person," he finished, while Raúl also cried.

It was the most emotional moment of the ceremony, in which Marcelo also declared to his wife,

everything I am and have is for you

", and warned that this is only a "see you later".

If one day I ask for a ticket

and you don't give it to me, we'll have a problem," she joked.

"It is a day of joy, not sadness. I arrived as a child, I leave as a man," he finished.