Analysts choose Kaio, Harib and Mabkhout as the best attacking trio in the Australian Test

Athletes and technical analysts have chosen the most appropriate line-up in which the UAE national football team will play its expected decisive match against Australia, next Tuesday, at Ahmed Bin Ali Stadium within the Asian play-off qualifiers for the 2022 World Cup, noting that it is formed in a large proportion. 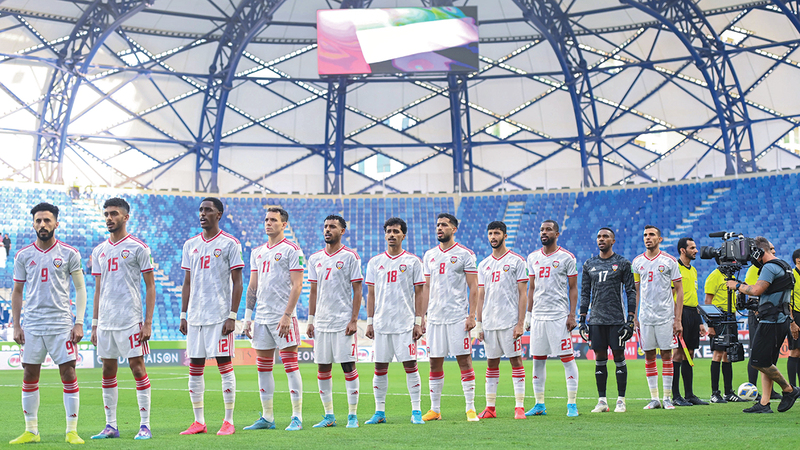 Analysts choose Kaio, Harib and Mabkhout as the best attacking trio in the Australian Test

Athletes and technical analysts have chosen the most appropriate line-up in which the UAE national football team will play its expected decisive match against Australia, next Tuesday, at Ahmed Bin Ali Stadium within the Asian qualifying play-off for the 2022 World Cup, noting that it is made up of a large proportion of the same elements that played the two Iraq matches. And the last two South Korea, with the possibility of making minor changes with only one or two players, especially after the return of striker Ali Mabkhout, who missed the last South Korean match, stressing the importance of choosing the most ready elements because this match is crucial and does not tolerate any kind of adventure.

The team inaugurated its preparatory camp in Doha after arriving from Dubai, with the participation of 29 players out of 30 after Abdullah Al-Naqbi was excluded due to injury. Khaled Issa in goalkeeping, Walid Abbas, Muhammad al-Attas, Khalifa al-Hammadi and Abdulaziz Haikal in defence, Bandar al-Ahbabi, Majed Hassan, Abdullah Ramadan and Muhammad Abbas in the middle, Caio Canedo and Abdullah Suhail fought in the attack, and Ali Mabkhout was absent from the squad.

The former international player and technical analyst, Abdul Rahman Mohammed, told "Emirates Today": "The squad that the team will play against Australia is so far not clear, because the coach tried 24 players against Gambia during the last friendly match that brought the two teams together as part of the team's preparations to meet Australia." , stressing at the same time that “the squad is in the mind of coach Aruabarina and that he will choose the most suitable player who is 100% ready, because this match does not tolerate any kind of adventure as it is fateful and the team must play it intelligently, by not keeping pace with the Australian team in the process of strength and docking, because The competitor is superior in this aspect.”

He added, "The expected line-up will not differ much from the one in which the team played its last two matches against Iraq and South Korea, and in the event of a change, it will be with the presence of one or two elements."

He continued, "I expect that the coach will pay goalkeeper Khaled Issa in the goalkeeper, in the defense Walid Abbas, Khalifa Al Hammadi, Bandar Al Ahbabi and Khaled Al Dhanhani, and in the midfield, Abdullah Ramadan and Ali Salmin, alongside the presence of Abdullah Hamad, and in the attack, Suhail and Caio Kandeo fought."

Regarding the most appropriate way in which the team can play the match, Abdul Rahman Muhammad confirmed that “the 4-5-1 method is the most appropriate method for facing Australia, considering that it is very important for the players of the parties to support the midfield when the team loses the ball.”

For his part, the Ajman coach and the former Emirates team and technical analyst Ayman Al-Ramadi said: “I cannot judge the squad because it will be available to the coach according to the data available to him, but the most important thing is to involve the ready player, but in my estimation there are players who represent the backbone of the team, most notably goalkeeper Khaled Issa. ».

Al-Ramadi continued, “If the coach plays in a 4-3-3 method, I think that the three attackers will be Caio and Harb Abdullah Suhail and Ali Mabkhout,” noting at the same time that “Aruabarina can play in a 4-5-1 method, and it may change to attack during Playing to a 4-3-3 method.

He continued, “I do not know who are the most ready players, but I can expect to choose about 80% of the squad and the rest of the players, of course, according to the coach’s vision in the end, so in my estimation, the players closest to being in the squad are goalkeeper Khaled Issa and in defense Khalifa Al Hammadi and Walid Abbas, along with the presence of Abdulaziz Heikal and Muhammad Al-Attas, as well as the presence of Ali Salmin and Abdullah Ramadan, in addition to the trio of Hareb Abdullah Suhail, Kayo and Mabkhout.

As for the former international goalkeeper and technical analyst, Abdel-Qader Hassan, he said: “It is very important for the team to be ready to meet Australia, especially in terms of mental, psychological and physical preparation,” stressing that “the team, in its estimation, is physically ready through the players’ participation in the league matches and the last football season.” ».

Regarding the most appropriate way in which the national team can play the Australia match, Abdul Qadir Hassan said, “The way to play is determined by the coach, according to his knowledge of the opponent team, the centers of power and the matches he played.” His view is through his general view, but it does not reflect reality, and it can lead to a kind of confusion, indicating that the coach will develop the appropriate squad according to the capabilities available to him.

Regarding his opinion on the appropriate line-up with which the national team can play the upcoming match against Australia, Abdel Qader Hassan said, "I do not expect it to be much different from the one in which he played his last match against South Korea."

• The national team will play its decisive match against Australia in the World Cup supplement next Tuesday.