50 medals, the outcome of the UAE's participation in the Gulf of Kuwait

The curtain came down on the participation of the UAE sports delegation in the third edition of the Gulf Games hosted by Kuwait, with the participation of more than 1,700 from the Cooperation Council for the Arab States of the Gulf in 16 individual and team sports. Its 111 competitions were held in 12 locations during the period from 16 to 31 May. 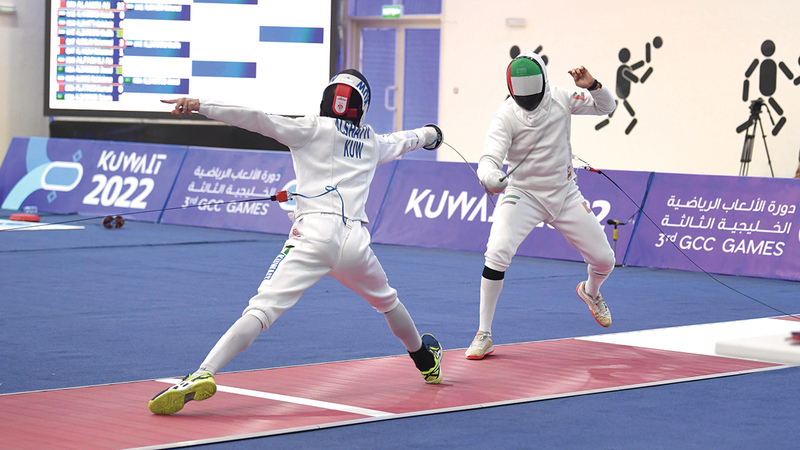 She came in third place in the overall standings

50 medals, the outcome of the UAE's participation in the Gulf of Kuwait

The fencing team starred in the closing day and won 3 medals.

The national fencing team won three bronze medals at the conclusion of the Gulf Sports Games through the men's team competitions in the "fluorite", "saber" and "epi" competitions. The fencing team raised the medal tally in its Gulf participation to four medals.

The fencing team won the bronze medal in the fluorescent competition for men's teams, after the team consisting of Hamad Al-Jallaf, Khalifa Al-Kaabi, Shehab Al-Jaabi and Faris Al-Balushi succeeded in overcoming the Saudi team in the quarter-finals with a score of 45-34, which led them to qualify for the semi-final match against Kuwait lost by 18-45 to share the bronze medal with the Bahraini team, while the Qatari team won the gold and the Kuwaiti team won the silver.

In the saber competition for teams, the fencing team won the bronze medal through the team consisting of Khalifa Al-Abri, Hamed Al-Mazmi and Khaled Mubarak, after facing the Saudi team in the semi-finals, which our team lost 27-45 in favor of the Saudi Green.

Our team achieved third place in the men’s “epy” competition through the team consisting of Saif Ahmed, Khalifa Al Zarouni, Muhammad Al Mazmi and Abdullah Al Hammadi, after a strong confrontation with the Kuwait team in the semi-finals, which the latter won against our team with a score of 45-38. The Saudi team won the gold medal and won the medal Silver Kuwaiti national team.